A MasterChef 4th of July

Many of you have been asking about the relationship between the contestants during and after the show, and I’m happy to report that we all pretty much adore each other.  We grew VERY close during the filming and have remained extremely tight since.  Just in the past month, I’ve been to LA to visit Adrien, Esther, and Alejandra, and to NY to visit Derrick.  (Max was out in the Hamptons, so I didn’t get to see him.)

Then, over the 4th of July weekend, I hosted Tracy and Alvin back-to-back, with the lovely Jennie Kelley driving the 30 minutes that separates us on quite a few occasions over the long weekend.

Tracy and Jennie arrived a few moments apart on Thursday afternoon in time for us three to get in my kitchen and start cooking.  After welcome hugs and tears, we did just that.  And I can’t really explain how cathartic and healing it felt to be in the kitchen with these two dear, dear friends, cooking for the first time without cameras or time limits or mystery boxes.  I cook because I love people.  That’s the only reason.  I don’t cook for the process itself…for the ingredients or the finished plate.  I cook because it’s the best way I know how to show the people in my life that I love them.  And many moments throughout those hours, tears welled in my eyes as I looked over at Tracy and Jennie, cooking in my kitchen next to me, as if it was the most normal thing in the world.

I made my signature Chicken Parmigiana…a dish many of my friends were shocked to see me NOT make during the chicken challenge under which the top 18 were selected.  But I made myself a promise that I’d do everything possible to AVOID making Italian food for Joe Bastianich, because he’s such a purist, and my chicken parm is anything but traditional.  Still…it’s YUMMY!  I’ll post the recipe soon.

I also made an overnight loaf of spent-grain sourdough bread, using the barley that I had used the week before to brew some grapefruit ginger IPA.  I threw some rosemary and garlic in for good measure.  I had planned on firing up my wood-burning pizza/bread oven in the backyard, but it was almost 110 degrees outside, and I just wasn’t in the mood to stand in front of a flame-belching oven in the heat.  That oven’s not gonna get much use until the temps drop below 90 here in north Texas.  Late September, perhaps?  Ugh!  So I just baked the bread in the oven and it came out great.

Jennie had some across a rare selection of FRESH morel mushrooms, which are among the yummiest things on the planet!  (She swore me to secrecy about her source.)  They weren’t local, I don’t think, but I could be wrong.  (Morels DO grow all over Texas, and careful, knowledgeable foragers can find them in late spring.)  With the morels she made a delectable mushroom risotto…one of my favorite ways to eat wild mushrooms.  She had also brought some fresh burrata, which is a type of fresh buffalo mozzarella that is filled on the inside with a rich creamy combination of cheese and cream.  Over that we poured some amazing, rare olive oil from the vineyard my partner’s sister lives near in Sicily, and that combined with the bread was mind blowing.

Jennie also whipped up a salad of baby spinach and arugula and feta cheese, with a vinaigrette of jalapeno and mint.  I had never tasted a salad like that before…it goes down as one of the most delicious I’ve ever had!

Tracy had just driven in from New Orleans, so we spared her any menu conceptualization, but she jumped right in and made my chicken parm for me.

It should also be noted at this point that my fridge decided it no longer wanted to live during the middle of dinner prep.  OH well…just another thing to add to the urgent to-do list that’s about 5 pages long.

After an amazing dinner with my friends, we settled down on the couch with some of my homemade beer and talked until the wee hours.  Laughing and crying, like we’d known each other since we were kids.  And to think that 5 short months ago, we didn’t know of each others’ existence!

After another incredible dinner at the Meddlesome Moth on Friday (pork belly, veal sweetbreads, bone marrow, mussels with tarragon and gorgonzola, pate and pickled okra, followed by fireworks at Grapevine Lake, Tracy headed to Los Angeles and I had just enough time to clean up the kitchen and buy a new fridge before the great Alvin Schultz arrived.

Sunday afternoon we went to all my favorite ethnic grocery stores in the area, and tossed a couple of briskets on the smoker.  Alvin had brought his sous vide immersion circulator, courtesy of PolyScience, and into it went about 10 pounds of pork belly.  (At the Mexican grocery store, we didn’t see pork belly in the meat case, so we asked the butcher if she had any.  “Maybe, how much would you need?” she asked.  “A lot,” replied Alvin, as she disappeared into the back…to return with AN ENTIRE PORK BELLY.  “Maybe not quite that much,” Alvin retracted.)  He cooked that pork belly at 70C for 14 hours, then smoked it for another 3, the crisped the fat cap under the broiler.  It was ridiculous.  I threw together my mom’s potato salad, and a big batch of my homemade barbecue sauce, which has like 100 ingredients, and then we settled down for a night of chatting.

Monday morning Alvin made a deconstructed Spanish tortilla for breakfast.  Normally, a Spanish tortilla is like an omelete or frittata, shredded potatoes cooked in a layer with egg.  But Alvin had made some 63C Degree Eggs the night before (basically an egg delicately poached inside its shell to a custardy consistency), which he placed in a glass, topped with potato foam, and finished with crispy fried potato hash and carmelized onions.  It was MIND BOGGLING.  SO delicious.  I tossed together some banana nut muffins to go with it, and one of the better breakfasts my kitchen has seen was served to a hungry crowd.

The rest of the day we finished preparations for the big July 4 dinner.  I made some BBQ beans.  Alvin made an incredible strawberry lemon sorbet that he froze in my KitchenAid using dry ice! 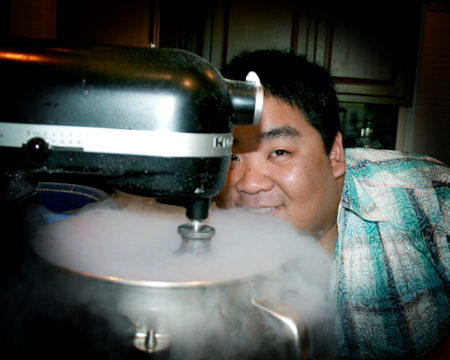 I got out my antiquated ice cream churn and made some coconut ice cream to go with the sorbet.  It turned out lovely, too, but took 30 minutes to freeze, whereas Alvin’s sorbet took around 1 minute.  Sheesh…

Then we packed up all the food and headed to our friend Kellie’s house for the party.  We had around 20 people show up, including Tudie from MasterChef.  She is one of the funniest people alive, it was great to see her.  Jennie Kelley came with her partner Evan, who I adore, and she whipped up the BEST fried okra I’ve ever had in my life.  (She cuts the spears in half lengthwise, rather than cutting them into rounds.)  She also produced some truffled deviled eggs, and I popped 3 of them into my mouth hole before she could even set down the tray.

I really feel like Jennie never got a chance to adequately show the world her talent on MasterChef.  Literally everything she has touched since we came back from filming has been stunningly good to me.  I guess the format of a limited pantry, limited time, and forced themes certainly allows a versatile chef to strut his or her stuff, but it doesn’t necessarily allow for a wide-open freedom of culinary expression.  Or Jennie would probably have won.

Much beer and food later, floating in the pool and watching the fireworks, I am captivated by this amazing country in which we live.  We must NEVER forget all the brave men and women who both lived and died for our country.  Not just soldiers.  Flight attendants and pilots, too.  Civilians at work in skyscrapers or going on vacation from Boston to the west coast.  Presidents.  Activists.  Artists.  Teachers.

Our country may be divided by political polarization.  But it is STILL the best country in the world.  We have a long way to go, but we’re headed there faster than anyone else.  Let freedom ring!