I’m sorry I haven’t written in three days. It’s not because I haven’t had access, a connected computer has been sitting next to my bed the entire time. It’s simply because these Aussies live a RIDICULOUSLY hedonistic lifestyle, and we’ve just been caught up in it all.

After our long day in Sydney, we wanted to sleep in a bit before our Saturday flight to Perth, hopefully sleep off a little of the jet lag, because we knew that the birthday party on Saturday night would be a doozie and we wanted to be ready for it. So we were hoping to sleep in at the hostel until 9 or 10.

Wrong! At 4 am, a Scottish guy stumbled into our room, cursing in the dark, and crashed into bed. That’s normal for a youth hostel, people coming in at all hours to pass out. Normally, you just roll over and go back to sleep.

At 5 am, a British guy burst in, saw the Scottish guy asleep, and hollered, “Bugger me, you bastard! Is all you do just sleep all day? Last time I saw you was 5pm, and you were asleep. Now it’s 5am, and you’re still asleep!”

The Scottish guy woke up, groggily, and cursed a bit. “I’ve been out getting pissed, you f-ck. And now you woke me up. Well, I’m awake, I might as well go and get pissed again.” (For those who don’t know Limey speak, “pissed” means drunk.)

So this Scottish guy gets up, an hour after passing out drunk, and heads out to get drunk again. Sydney has no drinking laws, and many bars just don’t even have doors because they never close.

The Brit tears off his shoes, filling the room with an unspeakable stench, and jumps up onto the bed, quizzing J-P and me about our origins.

“I hope I don’t offend you by asking this, blokes, but you got a spliff I can buy off you?”  (For those of you who don’t smoke pot, “spliff” is Limey-pot-speak for joint that includes both marijuana and tobacco.)

“Just as well. Still, I need something to put me-self to sleep. If I ain’t got a spliff, I’ll eat a sleeping pill.” He opened his backpack and dug out a little pill, swallowing it without any water.

“Did that Scottish guy really go out to get drunk at 5am?” I asked.

“Damn right, he did! How long are you blokes in town?”

“Our plane leaves in about six hours.”

“Well, then, we’d better go and have a beer ourselves! Pub down the way sells a schooner of Guinness for only $4.80!”

J-P, still a little green from the fish and chips, moaned.

“Come now, don’t make me go back to London and tell everyone how dreary Texans are!”

You can’t say such a thing to J-P, whose personal goal it is to redefine the image of Americans in the minds of the international public. But he was just too sick and exhausted to redefine the image for this particular Brit, and I knew we’d never get any sleep staying in the room with this guy. So out of personal sacrifice, I decided to go have a beer with this guy at 5am, and let J-P get some much-needed sleep.

That, and how often do you get to say you got drunk in Sydney at 5 in the morning?

At the pub, I ordered a schooner of Guinness at exactly 5:43 in the morning. A typical Sydney breakfast. A portly Aussie bird (they call women “birds” here) came up to us, drunk as she could be, and she and Marc proceeded to have a heated, 30-minute debate on the correct pronunciation of the word “cashew.”

Then Marc and I wandered the streets for a bit, talking about politics, drug culture, and the politics of drug culture. Then we ordered a meat pie (the quintessential Aussie snack) from a street vendor, and went back to the hostel.

J-P and I packed and headed to the airport for our 5-hour flight across Australia to Perth. We were met at the airport by Iris, the mastermind of the surprise party. She drove us home to freshen up, and then we headed to The Cricket grounds to surprise Wayne. 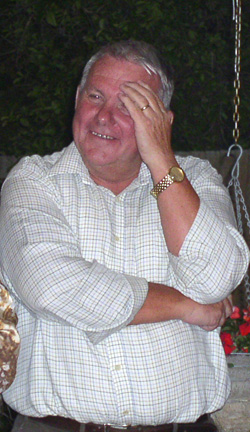 Wayne, wondering how-the-hell we got to Australia

The Cricket is Australia’s favorite sport. And it’s always referred to as “The Cricket.” When we got to The Cricket grounds, Wayne was sitting in the attached pub watching his son Joe captain the local cricket team. We snuck up behind him and scared him good. He couldn’t speak for about 5 minutes, he was so shell-shocked that we were there!

He ordered us a beer and invited a few friends over to the table, and we proceeded to be regaled on the finger points of “The Cricket” by a large man named Angry who had furry mutton-chop sideburns and a tattoo of Tweety Bird on his left bicep.

The party was scheduled to start at 6:30pm, and Iris was expecting 70 people, including two Olympians, several vintners, lots of relatives, and many old friends. Pete and Ruth Murphy, the other Aussie couple we met on the trip to Antarctica, were flying in from Melbourne, and we scared them good before they walked into the house.

I simply can’t describe the party to you. There was a never-ending stream of lamb, pork, and beef from the “barby,” and throughout the course of the night, the 70 folks in attendance consumed 30 bottles of wine and more than 400 beers. It seemed like every person in attendance could be the title character in a novel. And though many of them had never met the others at the party, there were NO fractal groups, everyone mingled, laughed, and gabbed with everyone else in a constantly simmering swarm.

The climax was a touching moment when Wayne’s children got up and talked about their childhood, and when Wayne’s long-time friends told the stories about he and Iris moving to Western Australia in the 1960s when the government was giving away free land. They got a particularly nasty plot, but cleared it away with backbreaking labor and farmed it as best they could until drought claimed everything. They lived in a tent for a number of years before finally moving to a tin shed. Then they gave up the farm, moved to Perth, and Wayne took a job working the coal mines. Then he had a long career as a police investigator, working the drug squad. And finally he and Iris bought a horse-betting business, which became their gold mine. And friends were present from every phrase of their life.

When everyone was finished speaking, it was Wayne’s turn. “I want to thank you all for this,” he began, with emotion mounting exponentially with each passing word. “Iris and I just want you to know that every single person here is a member of our family. and that’s about all I have to say!”

He later confided to me that he had MUCH more to say, but there was no way it would come out.

I thought, after I went to bed that night, that the party was over. But we were roused the next morning and told to dress up…we were going to the wine country of the Swan Valley for a family lunch. After a drive through the lovely river valley we arrived at the Riverbank Estate winery, where we tasted the entire line of 2003-2004 wines. To be totally honest, they were terrible! But the lunch that followed the tasting made up for it. 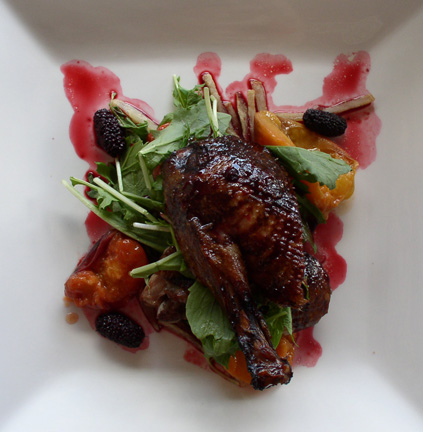 J-P and I both ordered roast duck on nectarine and peach salad with fortified Shiraz and mulberry sauce. It was incredible. Dessert (a mango passion fruit trifle, followed by an extraordinary blue cheese from Tasmania) stuffed us to the point of bursting. The wine had taken its toll, and when we got back to the house, I was ready for a nap.

But the Aussies were ready for a beer.

So we drank beers and cut up for a few hours, laughing and bullshitting each other, and then it was time to make dinner. Wayne threw some steaks on the barby, along with the largest shrimp I’ve ever seen. More bottles of wine were opened and more beers were popped, and we stuffed ourselves again.

This morning we went to visit Iris’s cousin’s flower farm, where they raise gerbers, a huge, brightly colored flower that’s popular in wedding bouquets here. Then we had lunch in Fremantle, Perth’s port city, which is filled with sidewalk cafes and lined with fantastic white-sand beaches on the Indian Ocean. After that we explored King’s Park, a vast, magnificent park overlooking downtown Perth and the Swan River, and then Iris and the girls took us into downtown for some shopping. Ugh.

It really has been incredible to experience this big, friendly Australian family. They’ve all come up from nothing, living in tents and working until they bled, to become millionaries. Wealth has a different face in Western Australia. Iris and Wayne are so loved in the community, their children Tim, Peta, and Joe are incredible people, and to see this family together has been a rare treat. Watching and listening to the stories and the interaction at Wayne’s 60th birthday party has made me want to live the same kind of life, so that I might be lucky enough to have the same kind of experience when I’m that age. It really has been priceless.

If we survive the beer and food for another 24 hours, we plan on heading over to New Zealand for a few days on Wednesday (Tuesday for you all).