While Hurricane Wilma is several hundred miles to our north tearing into Cancun (hopefully Justin and Katie, and their other friends who are there, are safe and sound), we are relaxing after another incredible day in Belize.

I forgot to mention a detail in yesterday’s email. On our hike to the sacred Mayan cave of Actun Tunichil Muknal, our guide pointed out lots of edible rainforest treats. We picked and devoured fresh limes from the trees. Among the more interesting things he offered were termites, fresh from their bulbous mud nests which hang low on tree trunks. 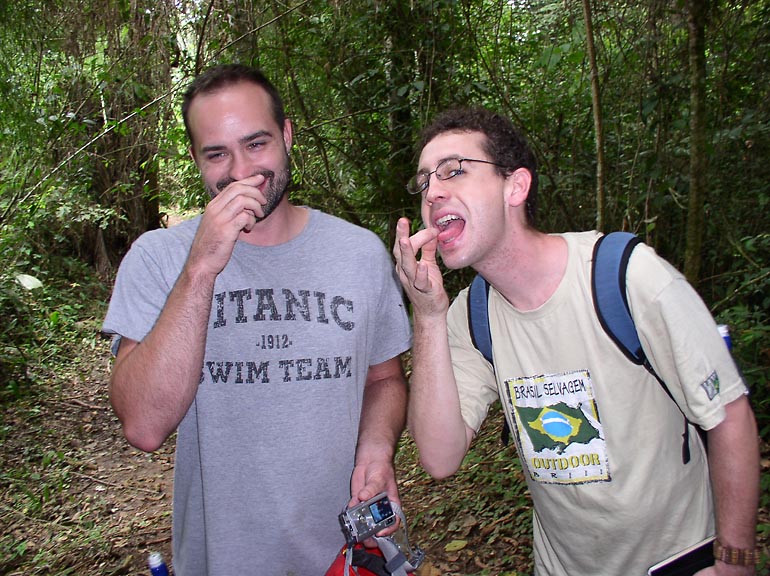 Nate and I eating termites. They taste like carrots.

Gripped with a sudden (an uncharacteristic) urge to eat bugs, I popped a few into my mouth.

Sandy was the only person who abstained from this lovely culinary adventure.

This morning, after a hearty Belizian breakfast of refried black beans, scrambled eggs, locally-made cheese, fresh papaya, and fry jacks (something like a sopaipilla, smothered in a local honey made from bees who cruise the rainforest and its many thousands of flower species), we headed south on an extremely rough dirt road into the most remote part of Belize.

The region is called Pine Forest Ridge, and the plant life and terrain look more like the Colorado foothills than a tropical country in Central America. The red-dirt road climbed high on a ridgetop that was covered in tall pine trees. The air was very cool and it was misty. 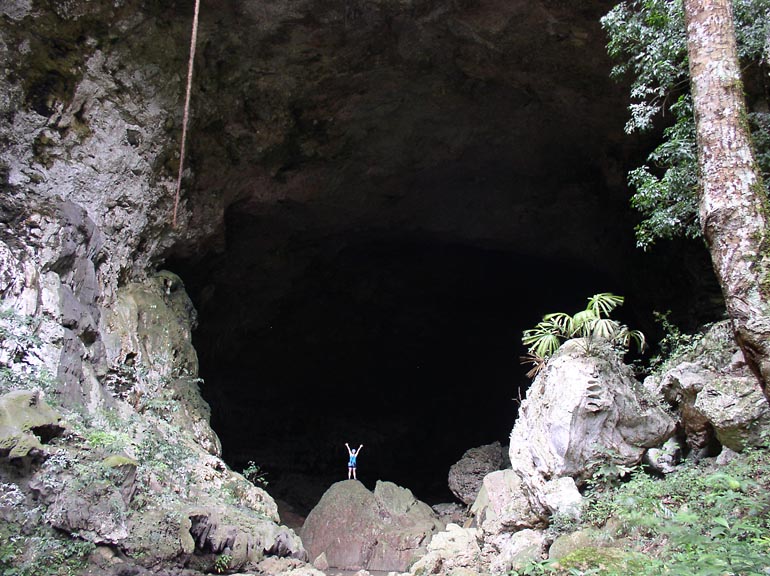 This is one BIG cave!

After an hour of driving, we turned off the main road toward the Rio Frio cave. The road took us into a canyon where the forest changed back to tropical rainforest, to the shores of a thundering river…the Rio Frio. We parked and walked upstream a short way to a cliff around 600 feet high, where the river poured out of a massive cave mouth easily 10 stories high, and twice as wide. It was overwhelming!

We climbed high onto a ledge which led back into the cave, well above the whitewater river which thundered below, and found that we didn’t even need flashlights. The cave’s entrance was so huge it let in enough light to see our way easily.

Around a bend we saw the opposite entrance to the cave. It’s basically a massive tunnel that the river created in order to shortcut a lengthy bend around the mountain. Several football stadiums could fit inside the space, it’s so huge! 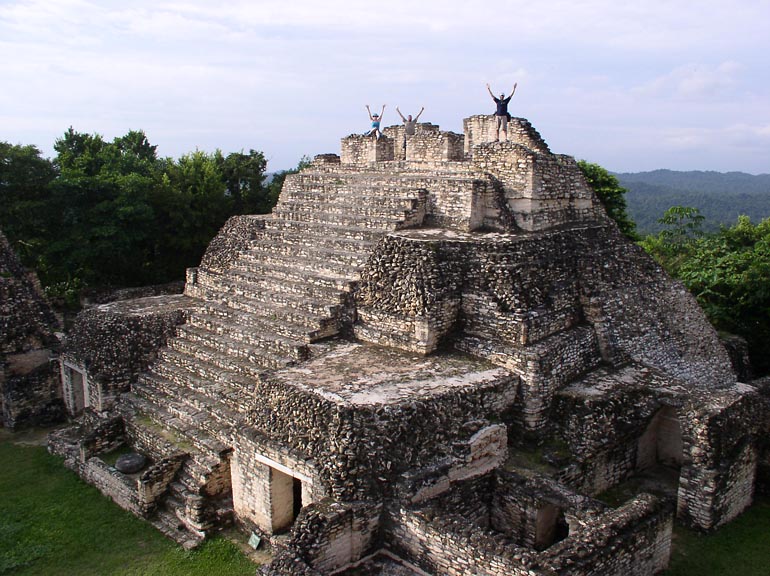 This is one of 3 pyramids ON TOP of the BIG pyramid of Caana!

Then we headed further south, leaving the last sign of civilization behind, and traveled another hour deep into the rainforest to the ancient Mayan city of Caracol. Caracol has been known about for 70 years (it was discovered in the 30s by a British man who was hunting for mahogany trees), but has only recently begun to be excavated. At its heyday, more than 150,000 Maya lived there (nearly half of Belize’s population today!) and there are more than 30,000 separate buildings. Only a few have been restored, one of which is Caana, a massive (and I mean MASSIVE) pyramid well over 150 feet high. It is still the tallest building in Belize, and it was built more than 1,500 years ago!!!

The best thing about wandering around this massive (and very active) archaeological excavation was that we saw two other tourists there. Two. At what is probably the largest Mayan city ever discovered.

Flocks of parrots were screaming overhead all afternoon. They were bright green, and usually flew close together in pairs. (Parrots mate for life.) We also saw a bright yellow spider that looked JUST like a flower.

On the drive out of Caracol, dusk was settling in. As we rounded a bend in the one-track dirt road deep in the rainforest, we spotted a HUGE dog in the middle of the road and slowed down.

Only the dog we spotted was SPOTTED. Yellow with black spots.

And was a LOT bigger than dogs normally are.

It turned to look at us, and it was instantly clear that it was not a dog. It was a cat. 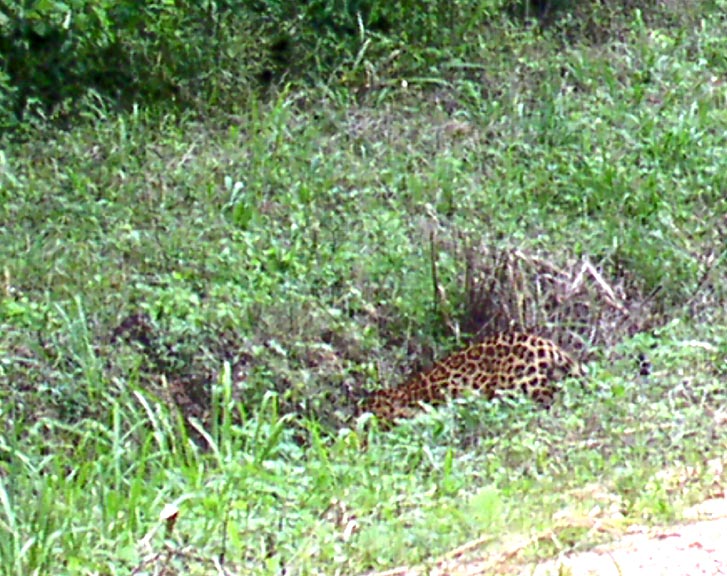 All my camera got of the rare jaguar

Belize and Costa Rica are the only places left in Central America that have native jaguar populations, but they are very elusive, and few in number. There were 8 reported sightings of a jaguar in Belize last year.

The jaguar looked at us, obviously curious but nervous. He was HUGE, maybe 6 feet from toe to butt (not including the tail). He scurried off into the bushes shortly after, and we only got two fleeting pictures of him.

Regardless, we felt INCREDIBLY lucky to have witnessed such a magnificent animal. He was utterly gorgeous. All the hair on the back of my neck and my arms stood on end when I watched him move!

A light rain (remnants of Wilma) cooled off the jungle as we made the two hour drive back to San Ignacio.

Dinner tonight was conch fritters (one of my FAVORITE foods, but I can never get it unless I’m in the Caribbean, so I was a VERY happy camper) and a pizza made with vegetables from the nearby Amish farm. Very very tasty. Around $6 per person, when all was said and done.

You will likely not hear from us until we are back in the states. Tomorrow we plan on doing a little tubing inside a cave (a popular pastime here in Belize…MOVE OVER Guadalupe River, now there’s something COOLER!), and then we will head to the coast, where we will leave the car (and civilization) behind and head to Tobacco Caye…a tiny sandy island on the Belize Reef, the largest reef in the western hemisphere, and the second largest in the world behind the Great Barrier Reef. Tobacco Caye has less than 20 full time residents, and a few bungalows right on the beach for weary travelers such as ourselves. No electricity, my friends! They bring oil lamps to you at night in your bungalow so you can read.

If all goes as planned, we’ll be back in Dallas on Monday evening.

Love to you all, and our thoughts and prayers for Justin and his friends braving Wilma up in Cancun!