Posted on July 2, 2012 | Comments Off on Burning Man: Initial Thoughts

Words generally fail any writer (except for the poet) who attempts to describe Burning Man.  So, rather than immediately try to express my feelings about my third Burn, I will just tell you all some notable events that transpired during the week. 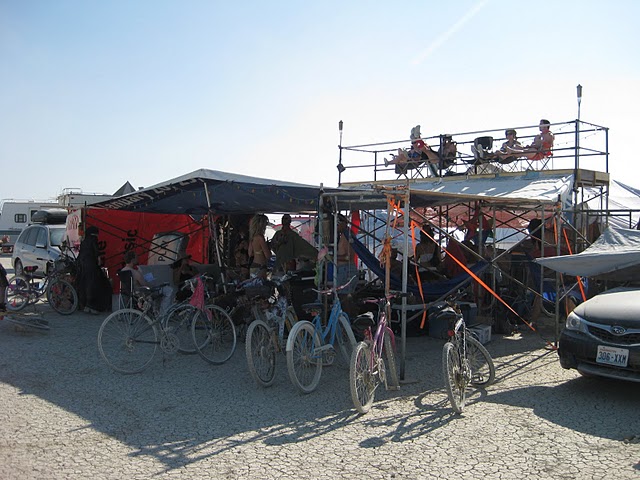 Our camp, which we decided to call Camp Potluck this year, was significantly bigger than before.  This year we had 17 planned camp residents, made up from 3 totally disparate groups who met each other at last year’s Burn and who really clicked.  This year we decided to join forces to better spread the joy of food and drink throughout Burning Man.  We had several brilliant design and technical folks in our camp this year, and they designed this wonderful Bedouin-style shade structure which included a second-story balcony which provided an amazing view of this temporary city of 53,341. 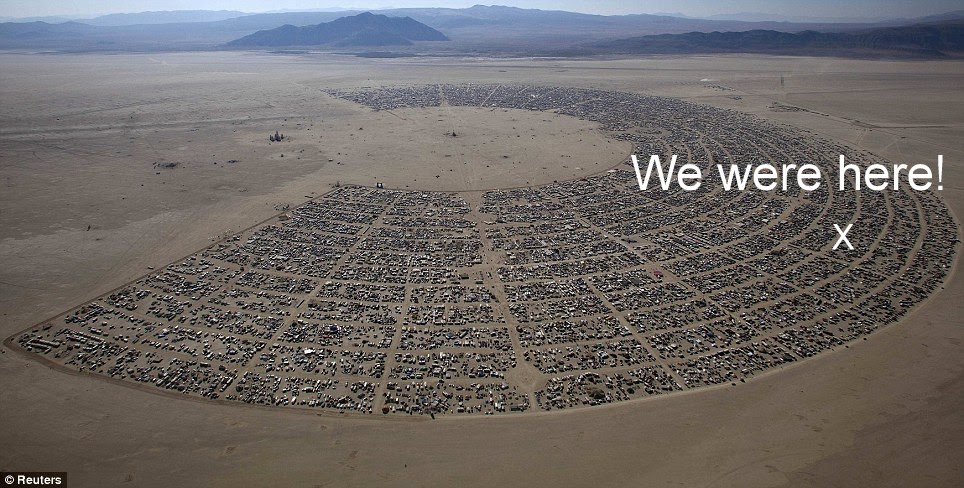 Early in the week I began meeting MasterChef fans who recognized me despite my blue hair and big sunglasses and crazy costumes.  Notable among the fans were Erica Douglass (http://www.erica.biz/) and Brian Fryer (http://brianfryer.com/), a delightful couple from San Diego.  Erica is a noteworthy entrepreneur in the web development realm…one of only a handful of female millionaires to set her own rules in this male-dominated realm.  She has been to many Burns, and brought her boyfriend Brian this year for his first Burn.  I ended up spending quite a lot of time that week with Erica and Brian and, as usually happens at Burning Man, they were the catalyst for some amazing moments of self-discovery. 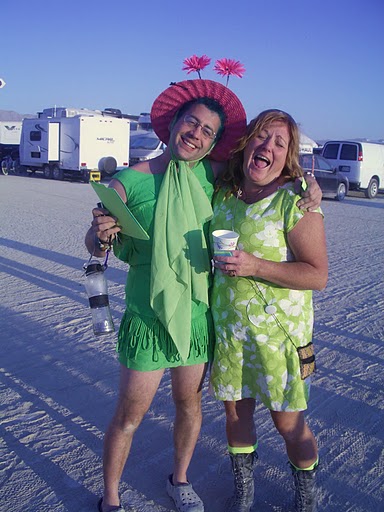 I went to Burning Man in a big haze of confusion and intimidation about my future.  The previous week in LA, I was in crazy meetings with important people, investigating my future in the culinary TV and publishing worlds, and was faced with images of massive success and massive failure.  I was terrified about how entering this big, scary, cut-throat world might change me and the relationships I have with friends and family.  I was terrified about how the potential for financial success might do the same.  I am a firm believer in anti-materialism, and the evils of money and how it changes people.  I have seen new-found wealth destroy many wonderful people in my life…seen it turn them evil and greedy and manipulative.  Quite frankly, I’m terrified of becoming financially successful.

But Erica and Brian, two people who truly embody this journey from obscurity to success, swept in and delivered this message to me over a breakfast of Brian’s arepas (which were divine!):  “Money is only a tool, and you can use that tool to affect incredible change and benefit for yourself and those around you.  Listen to your heart and it will tell you if people around you are interested in your money, your fame, or YOU.  And always remember that the people in this country who are your fans don’t love you because you are rich or famous.  You’re not rich OR famous right now.  They love you because of what’s inside your heart.  And that’s the only reason they’ll continue to love you.  Other celebrities are loved because of the way they look, their acting or athletic talents, or the good work they do in the world.  But people love you because of what’s inside your heart.  And that will only lead you to good places.”

Needless to say, I left that breakfast in tears, in awe that Burning Man has done it yet again.  It brings people together who need to meet each other, to encourage each other and teach each other. 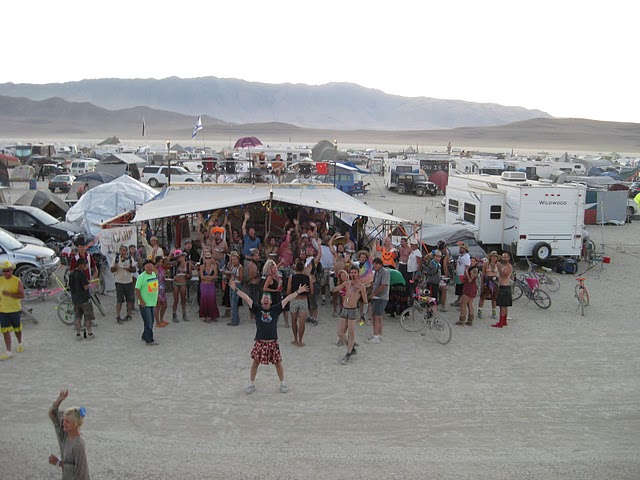 Naturally, it was my responsibility to give back to others the way Erica and Brian had given to me.  And this year, that meant feeding everyone I could possibly find.  The night of our big potluck, we dragged in hungry Burners from the streets and put incredible food into their tummies.  One young girl was shocked and a little terrified when we invited her to sit down to a proper meal.  “Are you serious?” she asked.  “My camp mate and I forgot all our food back home, and we’ve been living on cookies all week.  I just can’t bring myself to eat another cookie!!!” she said as she burst into tears and began devouring a plate of chicken with saffron rice.

Another young man from France, who works as a line cook in one of Paris’ 3-Michelin-starred restaurants, insisted on raving about my hummus and babaganouj…which embarrassed me because I had frozen them for the week and thawed them back out, which destroys their texture.  I’m accustomed to feeding hungry Burners who’ve been subsisting on Power Bars and Gatorade the entire week, not people who work in Michelin-starred kitchens!

Somehow we fed over 100 people that night, and they came into our tent and said it felt like home to them.  They left us messages in our guest book about how our potluck was the highlight of their Burning Man experience.  Many of them returned the next day to thank us, with tears in their eyes, for a night of incredible warmth and generosity, which they promised to continue to spread throughout both Burning Man and the Default World.

When packing to leave the next day I discovered 3 pounds of bacon in the cooler, so we set up a cooking station in the street and I started cooking bacon for passersby, and it started all over again.  A crowd amassed, new friendships were forged, and I continue to be amazed by the power of bacon.  If you cook bacon, good people will materialize to eat it. 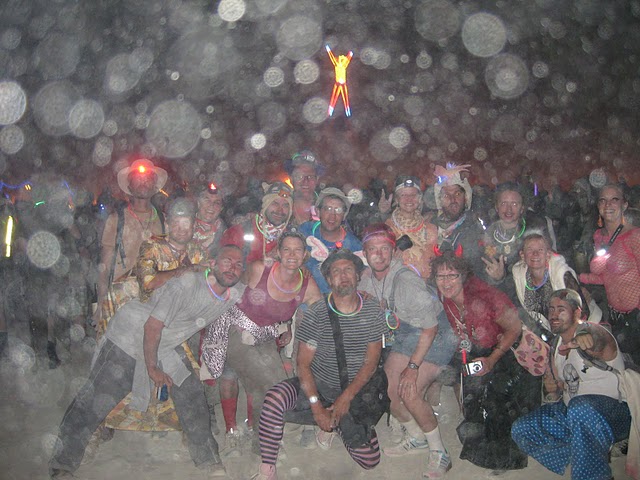 Deeper friendships were forged amongst the 17 core members of our camp.  Some of us have been friends for 15 years.  Some had just met for the first time.  But the synergy and chemistry between everyone was pure magic.  I have to thank everyone for making this such a special experience: Nate and Sandy and Captain Mark-Scott and Elaine from San Diego, Dave from LA, Chris from Dallas, Leif from Barcelona/Sydney, Polly and Bartley and Mike and Nathon and Deb from Salt Lake City, Monty and Adrien from Seattle, and Gabe and Gina from Jersey.  And to our honorary Camp Potluck members Eric and Mary from Seattle, who brought such joy from right next door.  Thanks to the incredible musicians camped across the street, who serenaded our potluck and got people to dancing after eating.  Thanks to the LA crew who ran Humle Dumle Bar across the street, who plied our dinner guests with creative cocktails (Jameson and Dr. Pepper is stunningly good!) and fed us amazing Korean BBQ the next day.  Thanks to the pirates next door, for keeping a smile on our face with their foam-ball cannons and their daily ritual of “walking the plank.” 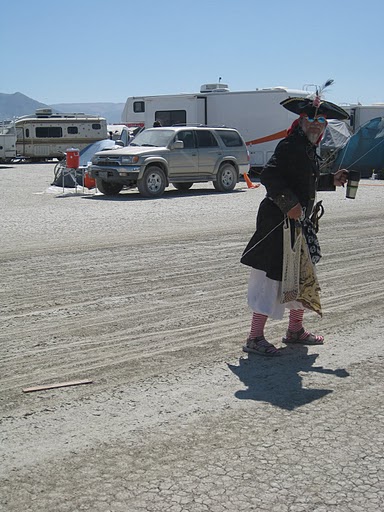 And thanks to Burning Man, this inexplicable event where 50,000 strangers assemble in the desert to celebrate individuality, creativity, and humanity.  It proves that people with widely divergent opinions and beliefs and lifestyles can live crammed together in a tiny space and not only tolerate each other, but THRIVE together: producing amazing art and ideas and organizations, pulling off massive feats of engineering and logistics, and communing and fellowshipping and connecting with each other in truly deep, meaningful ways. 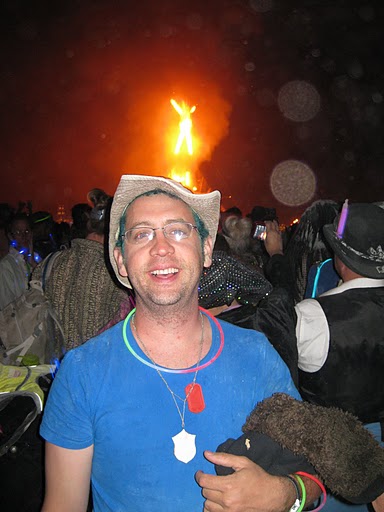 Burning Man is truly a miracle.  Over the next week I’ll be sharing more Burning Man stories and sentiments with you through my blog, so check back often.  And as I mentioned in my last post, you can bring a bit of Burning Man to YOUR life by stepping beyond the formality of human interaction and truly connecting with a stranger.  When they ask how you’re doing, stop them and TELL them, rather than saying, “Just fine.”  Walk up to a neighbor you don’t know very well and do them a huge favor…bake them cookies or mow their lawn or gift them something handmade.  The whole of our human intercourse and decorum seems designed to prevent us from connecting to each other in a meaningful way.  When you start to break through those formalities and conventions, it makes people initially uncomfortable.  So don’t worry when the checkout clerk seems to initially freak out when you move to give her a real hug.  Hug her long and strong and tell her, “You’re a wonderful person and I really hope you have a happy day.”  Then disappear and leave her wondering what just happened.  Maybe she’ll do the same to someone else.