The net is an incredible place, because 10 years ago, if I wanted to make “calaveras,” which are those sugar skulls that kids and lovers give each other for the Mexican holiday El Dia de los Muertos (the Day of the Dead), how on earth would I have figured out how to do that without going to Mexico and hanging out in some grandma’s kitchen? So I was all excited a couple of weeks back when I ordered my sugar skull mold (just a cheap piece of polystyrene that looks like the containers that things like Ipods and flash drives come in…that stuff thats practically impossible to cut open without slicing your hands) and got ready to make 40 calaveras for my fall dinner party. 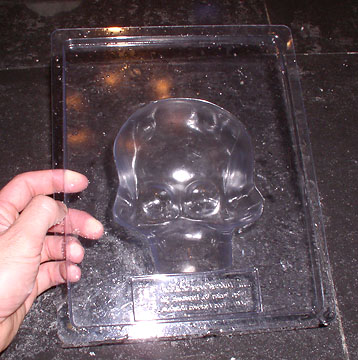 Exhorbitantly expensive for some plastic packaging!

The website that sold me the skull mold (for an astonishing $15 considering the cheap production cost…this stuff is just basically packaging) has a recipe for sugar skulls that I found repeated virtually EVERYWHERE on the internet. If a site had a recipe for sugar skulls, this was the recipe. And there simply were no other recipes. The problem was that their recipe called for an ingredient called “meringue powder” which is an obscure ingredient typically only found in commercial bakery kitchens, and it’s offensively expensive. Sure, their website will be happy to sell you a small quantity, enough to make about 4 big skulls, for around $10. Maybe that’s a bargain if you only want to make 4 skulls (which, with your $15 mold and $10 meringue powder, plus shipping, is going to make your skulls cost around $9-$10 per skull once you buy the rest of the ingredients). I can’t afford that for 40 skulls.

But their recipe specifically states, “This recipe will not work if you leave out the meringue powder, the skulls will fall apart.” And it was the ONLY recipe I could find on the net that looked legitimate. “Surely,” I thought, “those little grandmas in Oaxaca aren’t pulling out their tin of ultra-expensive imported meringue powder when it’s time to make calaveras.” Knowing that meringue powder is basically powdered eggs whites, I figured…why not just try using egg whites to help cement the sugar together, and maybe bake the skulls at a low temperature to speed the setting and drying process?” An experiment proceeded to unfold. And I got it right with the first try! So if you can find yourself a sugar skull mold, here’s how to make perfect calaveras without meringue powder:

Put the egg whites in the bottom of a big bowl, dump in the granulated sugar, and get your hands all messy squeezing and churning it together until the sugar feels like wet sand at the beach. You want the sugar to be as dry as possible but still stick together in the mold, but it’s better for it to be too damp than too dry. 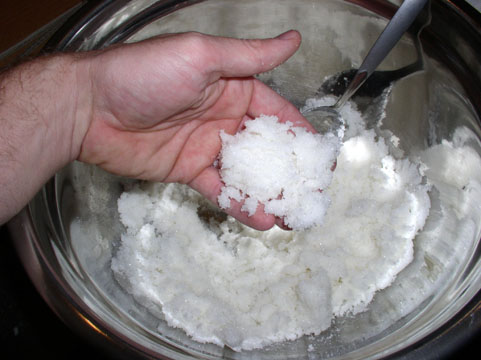 Take a handful, dump it into your skull mold and press it down, and continue until the mold is full. Make certain that you press VERY firmly so the sugar is packed hard into the skull. 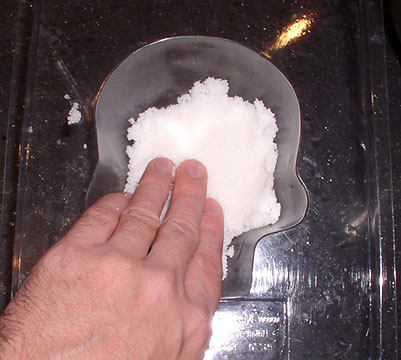 Packing the sugar firmly into the mold 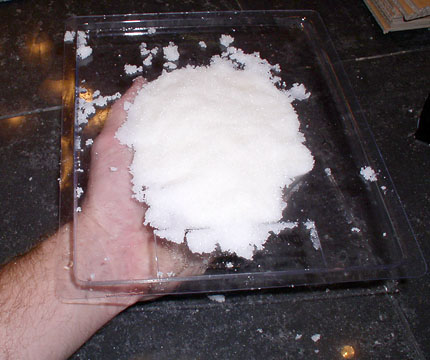 Over-fill the mold, pack it HARD!

Then rake a knife or straight edge across the back of the mold to give yourself a flat edge for the bottom of the skull. 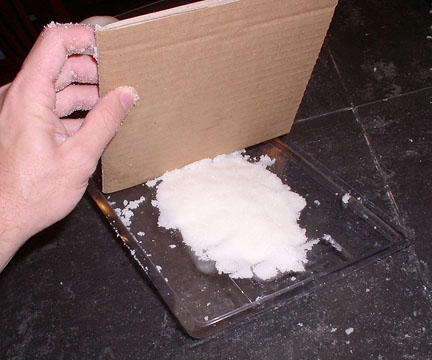 Then take a spoon and scoop out a little sugar from the center of the back of the skull so that you don’t waste sugar and so the skull doesn’t weigh too much. 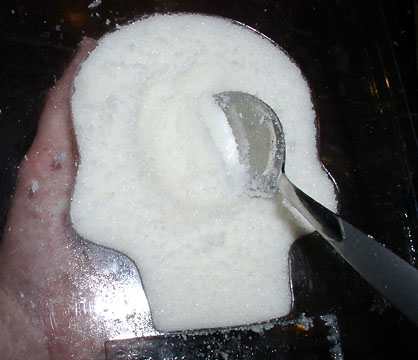 Make sure the walls of the skull will be at least 1″ thick when you dump it out of the mold, or it may collapse on itself. 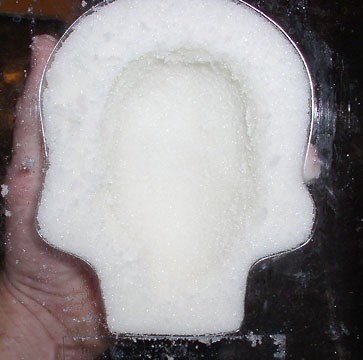 Then take a square of cardboard just a little larger than your skull, place it against the back of the mold, and flip the mold over. 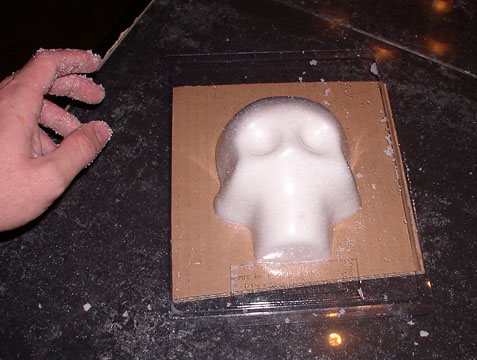 Gently flip the mold over onto the cardboard

Gently pull the mold up off the sugar and you’ll have a perfect replica of a skull staring back at you. 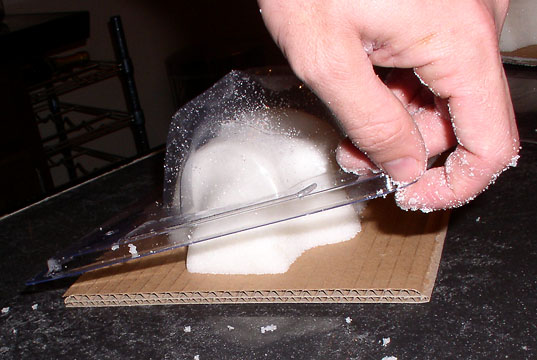 The mold should come off easily. If it is hard to pull off, your sugar is too wet and you need to add an extra handful to the bowl and work it in well with your hands. The mold should pull off easily leaving a smooth, perfect replica, and the drier the sugar is, the better this will happen.

Rinse the mold between each skull and dry with a paper towel. Continue making skulls with more sugar and more cardboard squares until you have all your skulls formed. Then, very carefully, place your skulls inside a preheated 200F oven for 30 minutes. When you remove them, the surface will be very hard to the touch. But don’t put too much stress on them yet…they need a week of drying before they’ll be hard enough all the way through to handle vigorously.

Google images for “sugar skulls” or “calaveras” to see pictures of how the skulls are decorated. Traditionally, the name of the person receiving the skull is written on a piece of colored foil which is placed across the skull’s forehead, and then the rest of the skull is decorated with brightly colored icing. You can get tubes of premixed icing at the grocery store which work just fine, or make your own by using lots of powdered sugar, an egg white, a few tablespoons of corn starch, food coloring, and a few drops of water. Stir it until it’s thick, then stuff it into a decorating bag. If you don’t have a decorating bag, make a cone of wax paper, parchment paper, or just plain paper, fill the cone with icing, and cut a tiny bit off the tip of the cone. Fold the top paper down until you can squeeze the icing out of the tip you just cut. Use the icing to decorate the skulls, which can be done as soon as they come out of the oven and cool. Then let the skulls, icing and all, dry for a week and you’ll have a perfect Mexican sugar skull. 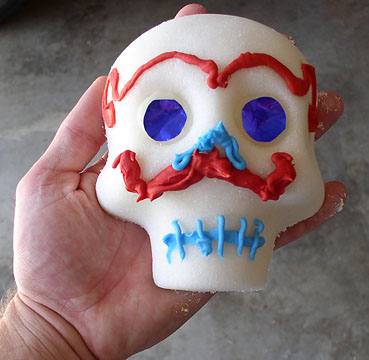 The recipe above will make about 2 complete large skulls. (Molds come with a front and a back. You make them separately and then glue them together with icing. I found it was just as cool to just make the front of the skull, the face, and decorate it so it lies flat on the table and stares up at you.) So the recipe above will make 3-4 large skull faces, but this will vary depending on the size of your mold. If you make lots of skulls, buy a huge bag of sugar and lots of eggs. I went through 25 pounds of sugar and 18 eggs to make 40 skulls, and only made the front half of the skull.