Our first group challenge!  And suddenly I’m back in middle school gym class and the captains are picking their team.  Christian and Suzy are the first to be picked.  No surprise there.  They seem to have emerged first as the two contestants with the most knowledge and experience.  I’m fresh off a day where I was singled out as the WORST in the Mystery Box challenge, and solidly average in the French invention test.  I’m thoroughly expecting to get picked last.

Then Gordon says, “BenStarr (from this point on he seems to want to refer to me by my first and last name exclusively), what are you doing still standing there?  I’d have picked you FIRST.”

Everyone gets a puzzled look on their face.  WHY?  Yesterday you told me I was the worst cook in the bunch.

“I’ve seen you work.  Remember the apples?  You work fast.  Precise.  You’re good.  Derrick, you’d be crazy not to pick him next.”

Derrick picks me next.  Team Red it is!  I like my team.  Derrick, despite what you may think of his appearance, is a tender, smart, quiet guy with a streak of culinary brilliance a mile long.  And he’s got Suzie.  And Alvin, my roomie.  Good team so far.

Now we find out we’re cooking for 350 people, and we have only 2 and a half hours to prep.  And this is how I react: 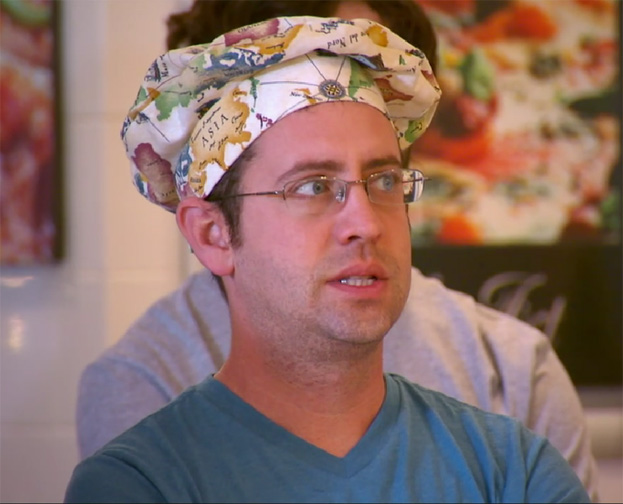 Have YOU ever made pizza for 350 people in two and a half hours?  And next I find out my pizza opponent is Giuseppe.  Of course!  The Italian.  But what Giuseppe doesn’t know is that I have a pizza oven in my backyard that I built myself.  I make wood-fired pizza ALL the time.  It’s one of my specialties. 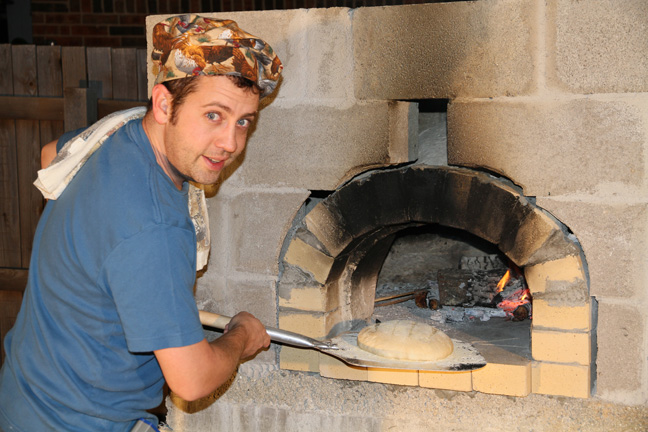 In the team pow-wow we decide on a white pizza.  Whatever we do, it has to be markedly different from Giuseppe to give us the best chance to beat Team Blue.  So, Christine sets about making a zillion gallons of bechamel sauce for the pizza, and I start working on grating the fontina and prepping the spinach.

I decide to saute the spinach with olive oil, salt, and garlic, to give it extra flavor.  But I quickly realize there’s no room in this tiny commercial kitchen for all 16 of us, and it’s gonna take an hour to saute enough spinach.  Chef Ramsay comes over and tears into me.  “BenStarr, it’s baby spinach for God’s sake.  You won’t have to cook it before you put it on the pizza.  It will wilt in the oven and be perfect.”

Thank you, Chef!  You’ve just saved me an hour.

I’m also responsible for dessert, and our initial plan was strawberry shortcake.  I start prepping shortcake dough when Chef Elliot comes over and says, “You’re really gonna have time to bake enough shortcake for 350 people?”  I look at my watch and realize that he’s totally right.  Pow-wow with Derrick and he agrees that we should just do simple berries, macerated (which basically means “marinated in its own juices” for you people who were heading into the gutter with that), topped with light whipped cream.  I find the largest bowl I can find, and begin slicing strawberries, and folding them together with blackberries, raspberries, blueberries, and brown sugar.

Customers begin to arrive, and thankfully, Derrick has assigned Alvin to be EVERYBODY’S assistant.  He begins by prepping pizzas for me.  When another station is having a crisis, he disappears to help them.  This proves to be the key to Team Red’s success.  Giuseppe’s pizza is brilliant, but he’s the only one on his station, so he’s running behind.  I’ve got pizza coming out my ears, and he’s just now putting a couple of his into the oven. 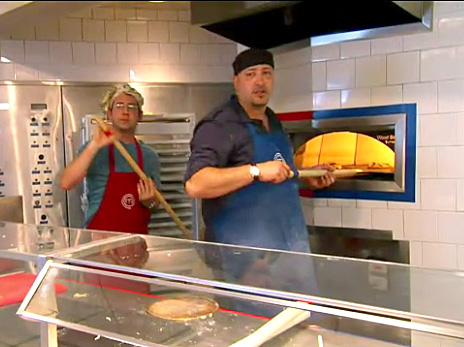 Giuseppe and I share a pizza oven meant for 1

To entertain the customers, he starts singing “O Sole Mio” in Italian, flaunting the accent.  I match him with “La Donna e Mobile” and shout to the customers that just because Giuseppe’s Italian doesn’t mean he can make pizza, and that they should trust the guy who has a wood-fired pizza oven in his back yard!  (Me.) He counters with, “Don’t buy pizza from the mushroom (referring to my hat), people.  What does a mushroom know about making pizza?”

We’re developing a playful rivalry, Giuseppe and I.  But it’s friendly.  At one point he’s pulling a pizza out of the oven that he desperately needs, because customers are waiting, and the pizza slips off the end of his peel and plummets toward the floor.  Reacting out of instinct I swing my peel under and catch it JUST before it lands on the ground.  I slide the pizza onto his cutting board and he thanks me and says, “You’re a good guy, Mushroom.  No matter what anyone says about you.”

Thank goodness for his friendliness.  We are sharing a pizza oven designed to be used by only ONE pizzaiolo (Italian for a pizza chef) making two or three pizzas at a time…not TWO pizzaiolos making 6 pizzas at a time.  I try to be as accommodating as I can while still performing at peak efficiency.  And just when I start to get panicky, Alvin Schultz shows up with another tray full of pizzas, ready for the oven.  Brilliant, brilliant Alvin.  Little do I know that he’s saving EVERYONE’S butt at the same time.

Finally, this never-ending day ends.  The last customer is served.  And I rejoin my team, who are all depressed and downtrodden.  I was in my own personal pizza world and had no idea we had run out of lasagne, and that the team was unhappy with its taste.  Or that customers weren’t liking the soup.  Poor Suzy is in tears.  She is absolutely convinced that we have lost, and that it’s her fault.  I hold her and try to tell her not to worry.  But as confident as Suzy is in her knowledge and skills, she crashes equally hard when she feels as if she’s failed.

Results come in.  We lose the soup and we lose hard.  We win the salad, though, by a big margin.  Entree goes to Team Blue by a big margin.  That means we have to win pizza AND dessert or we’re headed to a pressure test.  The verdict?

YES!!!  Now we’re 2 and 2.  Whoever takes dessert takes the day.  It’s my humble berries and cream against the formidable Esther Kang, who churned out 300 delicious chocolate chip cookies.

God Bless Californians and their thirst for simple, fresh food.  Dessert goes to Team Red.  Somehow strawberries win out over chocolate.  We are safe from the pressure test.  But Team Blue is in trouble.  Tony and Max are feuding.  I know Tony as a calm, gentle, soft-spoken man, supremely laid back and carefree.  But not today.  Tony’s eyes are bugging out, veins are standing up on his forehead, and he looks like he’s about to tear Max’s head from his shoulders.

We eventually get him calmed down, and Team Blue heads off to study for the pressure test.  (How exactly DOES one study for a test of unknown subject?)  Team Red celebrates and relaxes after a stupendously long day…

Next day is the “dreaded Pressure Test” as Gordon likes to call it.  We’re safe from elimination, so we get to go upstairs and watch from the gallery.  And I quickly find out that watching a pressure test is actually a bit worse than participating.  People I really care about are down there.  And I see every mistake they make in their stressed panic to complete perfect raviolis in the time limit.  In particular, I’m watching Esther.  Thankfully, I had given her a crash course in pasta making several days before, and I’m hoping she remembers everything we talked about.

Her pasta comes out beautifully…thinner than anyone else’s.  But Gordon says he tastes something funny in her filling.  Egg yolk?  She doesn’t remember.  (What a good lawyer!!!)  They chastise her for her filling, but compliment her on perfect pasta and sauce, and send her upstairs, safe, along with everyone on Team Blue but Tony.  His pasta is too thick.  Give him a break…Tony’s a pit boss.  The man knows meat like nobody’s business.  He’s not a pasta guy.

But I’ve just learned a VERY valuable lesson about MasterChef.  Even though the people around me may have more experience, more knowledge, and more skill in SOME areas, that doesn’t mean that *I* don’t have more experience, skill, and knowledge in others.  It all comes down to the challenge.  Some day soon I’ll have my day.  Give me a cake challenge.  A breakfast challenge.  A bread challenge.  A pumpkin challenge!  Then everyone else better watch it!  But until then, I still feel like I’m on thin ice.  Everyone else is a gourmet cook.  I make farmhouse food.  Street food.  Peasant food.  Comfort food.  And everyone else is soaring in search of Michelin stars for their “cuisine.”  (That word gives me a rash.)

TONY!  I will miss you.  Tony would sit next to me at the bar at night and tell me about his wife and kids, tears in his eyes with love for them.  He tells me about his ultimate dream…to have a little chalkboard cafe in his hometown.  You come in and eat whatever he and his wife are cooking that night.  My kinda place.  Some smart investor in Chicago would be crazy not to toss venture capital his way for that.  In the big city, exposure like MasterChef fades quickly and people forget.  Not in a small town.  Tony will be the town hero for generations because of this… 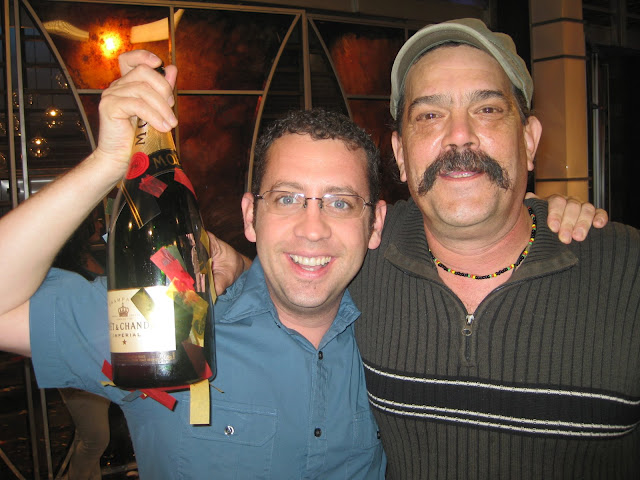 Tony...one of the best guys I've ever met

One response to “MasterChef: Pizza for 350!”