Bon giorno from beautiful Sicily! (Actually, we’re back in Dallas now, but I didn’t have Internet access while we were there, so I’m sending this belatedly.)

Christian and I came to Sicily to visit his sister, Angela, who has lived here for the past five years. She recently moved into a gorgeous 3 bedroom apartment overlooking the sea in Santa Flavia, about 15kms east of Palermo, the capitol and largest city. Christian’s mom, Vitoria (I just call her “Ma”) had planned a trip to help her get settled into her new place, and since the trip coincided with Christian’s fall vacation, we decided to go, too.

Because of heavy flight loads, Ma and Christian arrived in Sicily on Friday, and I arrived on Saturday. I was hungry from a long coach flight, so I grabbed an arancini at the airport. This is the official light meal or snack in Sicily and consists of a ball of cheesy rice stuffed with meat and veggies, breaded and fried. TERRIBLE for you, but it was utterly delicious. They cost about 1 euro at most places (around $1.25), are about the size of a softball, and are filling enough for a small meal. You can’t come to Sicily and not eat an arancini.

On Saturday, as I recovered from jet lag, we ran some errands for Angela’s apartment. She was looking for some furniture, including some chairs for her big balcony with its sweeping view of lemon and olive orchards leading about a half mile down the hill to the Tyrrhenian Sea. (Sicily is triangular shaped, 175 miles wide, and 110 miles from north to south, and is washed by the Tyrrhenian Sea on the north coast between it and Italy, the Mediterranean Sea on the southwest coast between it and Tunisia, and Ionian on the southeast coast between it and Greece. Sicily is the football at the tip of Italy’s boot, and there are less than 2 miles of water between Sicily and the Italian mainland.) 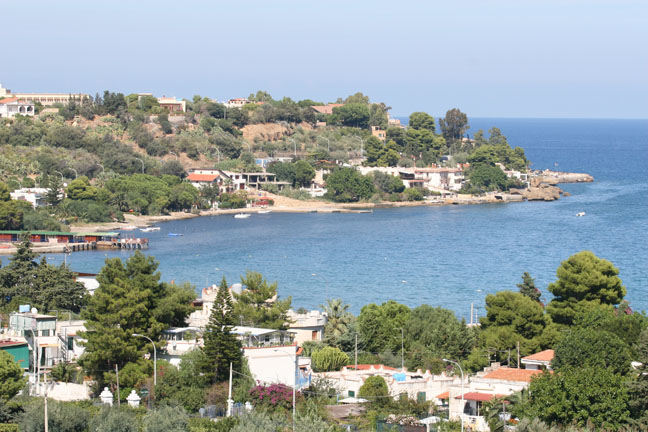 Well, since I’m already talking about Sicily, I’ll break from our rather mundane Saturday afternoon to tell you a little more about it. Sicily is the largest of Italy’s provinces by geographic size, and the third largest by population. It has the mildest climate in Europe (it’s also the southernmost European point), which accounts for its historical role as Europe’s breadbasket. It’s a very rugged island, with the highest point at Mt. Etna, 10,991 ft high, which is snowcapped several months out of the year. Etna is Europe’s most active volcano, and has been erupting almost continuously throughout recorded history. Despite its constant belching of lava, ash, and boulder bombs, more people have been killed by lightning strikes on its slope than have been killed throughout almost 3,000 years of recorded history by lava, earthquakes, or pyroclastic flows.

Those 3,000 years of history are among the most varied and violent in all of Europe. The Greeks began colonizing eastern Sicily in the 8th century BC (though it was inhabited by earlier civilizations for many centuries before) and the Phoenicians took over the western side. This began a series of conflicts that was successively joined by the Carthaginians, the Romans, the Vandals, the Ostrogoths, the Arabs, the Normans, the French, the Spanish, and the Italians, and all have left very strong cultural and architectural imprints on the island.

Back to furniture shopping…

This led us into Bagheria, one of Palermo’s largest suburbs, and the location of the language school where Angela teaches. While we discovered that Angela’s rent is remarkably cheap (around $400 for her gorgeous, modern, 3 bedroom apartment with glorious ocean views), stylish furniture to fill such a deserving space is priced quite similarly to the stuff we find here in the states. Similarly, food in Sicily is VERY cheap by our standards (restaurants you and I would consider quite nice charge between $6 and $12 for a main course with a very inexpensive wine list populated mostly by fantastic Sicilian wines) but gas is pricey, around $5.50 per gallon when we were there. 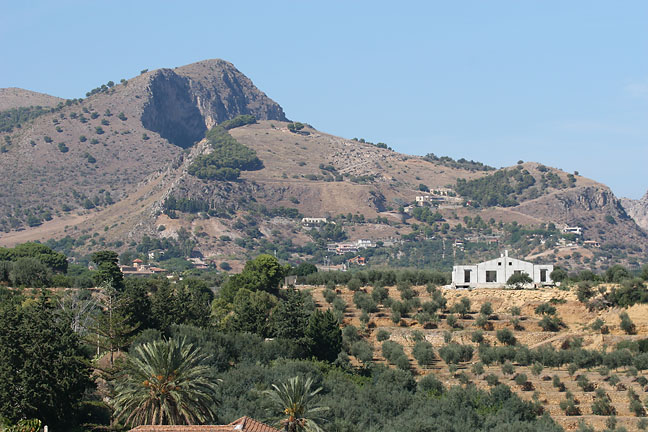 A view of an olive grove from Angela's balcony.

We went grocery shopping afterwards. I found that veggies (almost all grown locally, so they’re very fresh) were really cheap, as was pasta and wine. Eggs and milk were really expensive. The big shocker was that olive oil, Sicilyâ€™s largest export, was priced about the same that it is here, around $6-$8 for a liter. Sicily grows the widest variety of olives anywhere in the world, and they literally have hundreds of types of olive oils, from pale yellow to fluorescent green. Angela’s best friend, Rosie, has an olive grove and her parents make their own extra-virgin olive oil from it, so I happily forked over $30 to bring back 6 liters of the stuff. Ask me for a taste next time you come over. It’s unreal.

I was also amazed by the different varieties of eggplant. Called “melanzana” there, the Sicilians can’t get enough of it, and there must have been at least six different varieties at both the grocery store and the fruit stand where we stopped. They also sell these bizarre zucchinis that are about 4 feet long, squiggly, and as big around as two of your fingers. I can’t imagine what a whole field of those would look like.

After an evening nap, we drove to Palermo to have dinner at one of Angela’s favorite places. It’s in a back alley in a centuries-old building that looks like a cave. Dinner was late, the European way, around 10pm. We ordered caponata for an appetizer, a traditional Sicilian dish of fried eggplant in a sauce with tomatoes, capers, olives, and pine nuts. This restaurant threw in a twist with big chunks of swordfish. Bon appetito! I was desperate to order a vat of the fresh steamed mussels that many people around us were eating, but Angela forced me to get the porcini mushroom ravioli with the ricotta mushroom sauce. After that I let her order for me the rest of the trip. That pasta was literally the most delicious thing I’ve ever eaten. I know I exaggerate a lot. But this was no exaggeration. Everything about it was perfect. This set the trend for what was to be the most memorable aspect of the entire trip: the food.

That may sound a little disappointing or mundane for most of you (especially compared with my typical, high-adventure trip reports), but it’s certainly something to expect from a society which centers itself around food. Nothing business or social is done in Sicily without food. And it’s quite normal for Sicilians to utterly reject any type of cuisine but their own. Even Angela’s young, open-minded, well-educated friends would consider my Italian cooking completely inedible because it’s not done “how Mama makes it.”  Seven days a week they have pastries and coffee for breakfast, arancini or paninis or pizza for lunch, and a dinner consisting of an appetizer, a pasta course, a meat course, and dessert. Wine is drunk with lunch and dinner by virtually everyone old enough to drink out of a cup, and Sicilians seem to prefer sweet white wines to anything else. Coffee is taken after every single meal, but it’s not coffee like you or I drink. It’s thick, capped with a light-colored foam called “crema” but which has no milk or cream content, it comes only from the way the coffee is extracted from the beans. And it’s served filling only about a third of the capacity of a tiny cup that would look at home in a doll house. Barely a mouthful of coffee the way we drink it. But so potent that you have to take it in tiny little sips. It’s also consumed regularly throughout the day from the coffee bars that dot almost every block in Sicily. You order it, drink it standing up at the bar where it’s prepared, and then pay about 60 cents on your way out.

These coffee bars are also the same place you get lunch (the aforementioned arancinis, paninis, and pizza) as well as sweet snacks throughout the day. Every coffee bar has a gelato case out front and the Sicilians eat gelato (a very rich type of ice cream) inside a brioche rather than a cup or a cone. They take small buns of the sweet bread, hollow out the center, and fill it with gelato. It sounds strange, I know, but Christian and his ever-present sweet tooth, wouldn’t stop raving.

That meal crowned off the day and we went back to Angela’s apartment for an early bed time. The next day was a long excursion to the southwest coast to see Greek temples.

I promise that future emails about this trip won’t be so long, or so food-oriented! It wasn’t my intention to make you scowl at the hamburger you’re about to eat for lunch. But if you do, take comfort in the fact that I’ve scowled at every bit of food I’ve had to force into my mouth since we returned from this culinary heaven.

This entry was posted in Blog, Travel and tagged arancini, Sicilian food, Silicy. Bookmark the permalink.