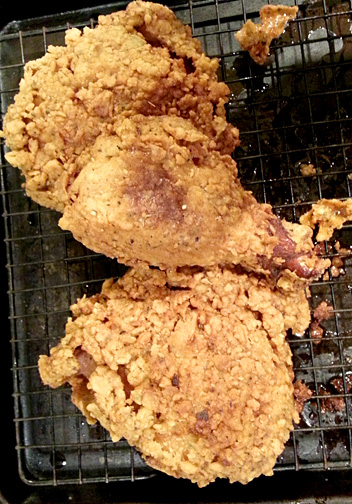 My pumpkin carrot cake may be more famous, but that’s only because it appeared on MasterChef.  This rosemary fried chicken has elicited the same response from virtually everyone who’s ever tried it:

“This is the best fried chicken I’ve ever tasted.”

It’s that good, folks.  After you taste it, you’ll never want fried chicken from a chicken joint for the rest of your life.  You’ll be spoiled to it.  But it’s no walk-in-the-park.  You can’t whip it together at the last minute.  But one taste, and your friends and family will be begging you to make this every week.  And the more often you make it, the easier it seems to make.

Many of us don’t make fried chicken at home because we’ve had a disastrous experience with it…burnt crust and raw chicken being the most common flub.  Trust me, I’ve had those mishaps before, too.  But after a few years of tweaking my grandmother’s cast-iron fried chicken recipe, using some ideas from America’s Test Kitchen, and a whole lot of experimentation…this is the end result.  We served this chicken with buckwheat acorn waffles and dandelion syrup at FRANK when The Illegal Eater filmed with us last spring, using fresh pastured chicken we harvested ourselves at Grandma’s Farm in McKinney, Texas, and it was a runaway hit.  This is the kind of chicken that makes the heavens open when you taste your first bite.  And, no…I’m not exaggerating.

There are a few secrets that make this chicken so incredible…the first is a rosemary buttermilk brine that infuses the chicken with rosemary and the perfect amount of salty seasoning, and the acids in the buttermilk work to break down the protein in the chicken to make it incredibly tender and moist.  The crust is made with a 50/50 mix of flour and cornstarch…an Asian technique that results in an incredibly crispy crust.  Blatantly stealing a technique from America’s Test Kitchen, I include baking powder in the crust, as well, and dampen the crust with some of the buttermilk brine to create crumbs that stick well to the chicken and react with both the buttermilk’s acid and the fry oil’s heat to expand the crumbs, giving them a light, airy texture that shatters in your mouth.  Fried chicken simply should never taste this good.

This recipe is also intended for use in a cast iron skillet…preferably an extra-deep chicken fryer skillet.  (I use my regular cast iron skillets to fry chicken, as well, and they are just fine…I only recently got my chicken fryer thanks to Neighbor Sharon.)  You cannot do this type of shallow fry in any other pan (unless it is massive and heavy), because lighter skillets have really bad hot spots and you end up scorching the oil and burning the crust.  Cast iron is my preferring type of cooking pan (read why here), it’s cheap, you can often find it used at thrift stores and garage sales, but even brand new it costs a fraction of those fancy clad pans with copper cores.  So if you don’t have cast iron yet, go hunt for it before you make this recipe.  Otherwise, you’ll need an actual deep fryer, which means LOTS more oil.

There are a few tricks for exceptional fried chicken that I deliberately avoid, namely the age-old method of frying in shortening, or “Crisco.”  While our grandmothers ALL did this, and it does, in fact, result in a superior product…I don’t know what shortening IS.  All I know is that it is modified at the molecular level to turn ordinary vegetable oil into a solid, which involves the process of hydrogenation, and results in those nasty trans-fatty acids that food scientists won’t go near.  (Modern manufacturers tell us their shortenings are now trans-fat-free, meaning the oils are FULLY hydrogenated rather than PARTIALLY hydrogenated…still, I don’t want to eat anything hydrogenated, I’ll stick to oil,thanks!)  I’ve found that canola oil, which has a high smoke point and is a heart-healthy oil, works absolutely fine.  Though you’ll need to buy a LOT of it to fry chicken.  But more on that later…let’s get to the recipe.

1-2 whole chickens, cut into pieces (or drumsticks and thighs)

Well, I have to stop here to explain.  If you’re breaking down a whole fryer, cut away the drumsticks and thighs, and then cut off the breasts and divide each breast into two pieces, so that you have chicken pieces that are more or less of the same mass.  The benefit of using a whole chicken is that you then have a carcass for making stock.  But it also means that you have to choke down chicken breast, which is the single worst type of meat on the market today.  Promise me that, henceforth, you will NEVER buy boneless, skinless breast again.  It’s dry, tasteless, and I have no idea why it’s so popular (and expensive) in this country, other than its low fat content.  (Though pork tenderloin is even more lean and much more flavorful.  But let’s all remember that eating saturated fat doesn’t make you fat.  Yes, it clogs your arteries and raises your bad cholesterol…but if you’re worried about losing weight, excess sugar and simple carbs are to blame…NOT fat.)  You’re about to eat FRIED CHICKEN, folks, so step away from the boneless, skinless breast, and buy a package of drumsticks and a package of thighs (bone in, skin on, of course).  This is what I normally do to save time on this recipe.

Make up a brine of: 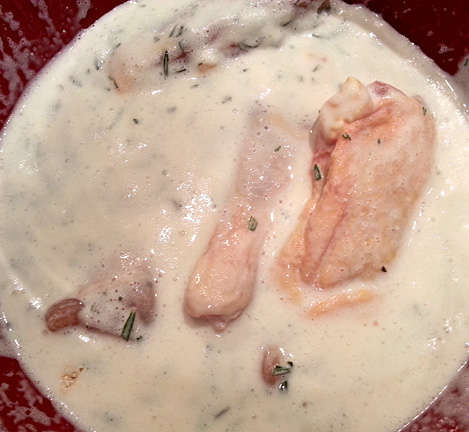 If you’re only frying 1 chicken, you might get away with 2 cups of brine, so halve the recipe.  If you’re doing tons, the ratio is 1 Tablespoon kosher salt to 1 cup buttermilk to give the right salinity level.  Adjust to however much brine you need.  Whisk the ingredients together briskly for about 3 minutes to ensure the salt gets dissolved.  Then submerge the chicken parts in the brine, or put it all in a big ziploc bag, making sure the chicken is thoroughly coated in brine, and place it in the fridge for a bare minimum of 4 hours, or up to 8 hours.  (I’ve gone as far as 12, but the chicken is pretty salty when you let it go that long.)  Everyone once in awhile, give the bowl a jiggle or the bag a squish, to redistribute the brine.  If you put the chicken in a bag, it should then be put into a bowl in case the seal on the bag breaks…you don’t want salty buttermilk all over your fridge!

Now make up the crust: 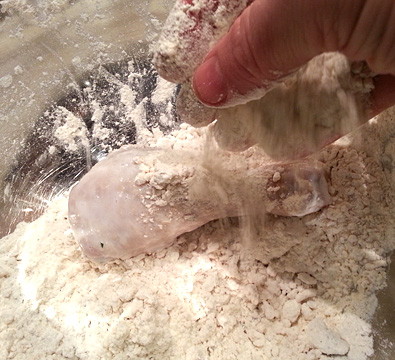 Note the texture of the breading...very "coarse crumb" like

Toss together well, then remove the chicken from the fridge.  Pour about 3 Tablespoons of the brine into the dry ingredients.  Toss it together, squeezing with your fingers, until the mixture looks like crumbs.  You may need to add a bit more of the brine.  Once the breading mixture looks crumbly, remove a piece of chicken from the brine, shake it well to get off the excess buttermilk (very important to keep from gumming up your breading), and lay it into the breading crumbs.  Sprinkle the breading all around the chicken part, then press down firmly to mold the crumbs to the chicken: 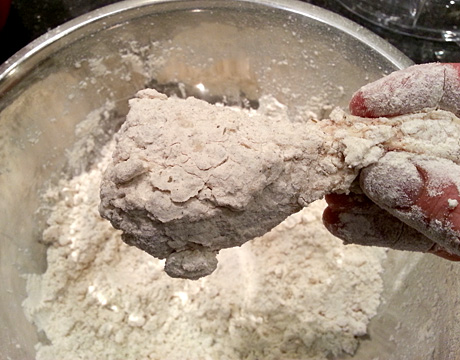 If you use your left hand to transfer the wet chicken pieces to the crumbs, and use your right hand to sprinkle and press, you’ll avoid the nasty building of crumbs on your hands.  Shake off any excess crumbs, then place the chicken piece onto your countertop.  (I line mine with parchment or plastic wrap first to make cleanup easier.)  Repeat until all the chicken parts are done.  Let them sit on the countertop while you heat up your oil…you want them to go into the oil at about room temperature, which would be a dangerous move if you weren’t cooking the chicken fully…but we’re going to cook our chicken fully. 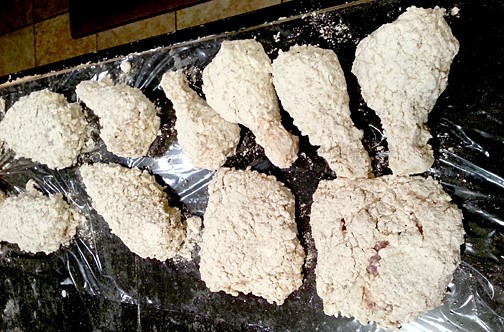 Place a deep cast iron skillet onto your stove and pour in about 1 1/2″ of canola oil, or up to 2 inches if you have a very deep skillet, like my cast iron chicken fryer.  Depending on the size of your skillet, this may take anywhere from 1-3 quarts.  You’ll lose some of the oil during the frying process, but later you can cool it, strain it, and pour it back into the bottle for your next chicken frying adventure.  (Be sure to label the bottle “FRY OIL” so you don’t use it for something else!) 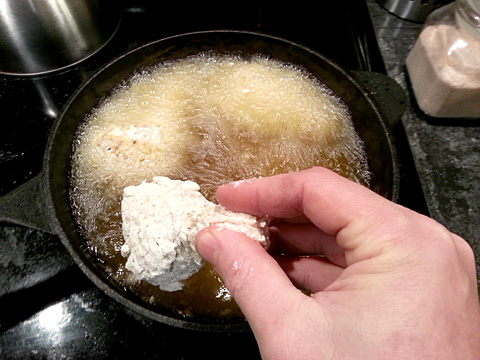 Heat the oil over medium to medium-high heat to 375F.  Then place the chicken parts very carefully into the hot oil.  You’ll probably only be able to fry 3-4 pieces at a time.  Don’t crowd the skillet, and be sure you don’t add so much chicken that the hot oil overflows!  (FIRE!!!)  Set the timer for 7 minutes, cover the skillet with the lid or aluminum foil, and leave the thermometer in the oil.  The temperature will plummet a bit as the chicken absorbs the heat.  It may go down as far as 275F…if it goes down that far, raise the heat a little.  You want to aim for a continuous temperature of 325F.  That’s your sweet spot.

After about 3 minutes, remove the lid, shift the pieces of chicken around in the pot to keep them from burning at any hot spots, and re-cover.  After a total of 7 minutes, remove the lid, flip the chicken pieces, and fry uncovered for another 7 minutes (for bone-in pieces, 5-6 minutes for boneless, skinless breast, which you’re NOT using, right?). 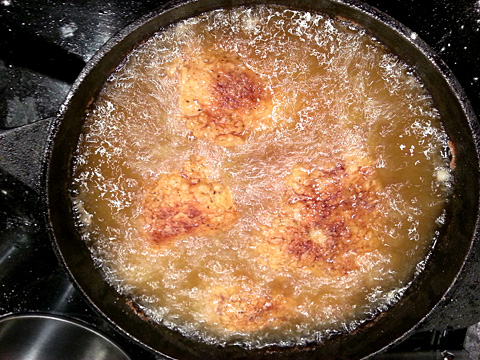 Then remove the pieces carefully to a cooling rack set over a sheet pan, season lightly with salt, and place into a 170F oven to hold until all the chicken is fried.  Cover the oil and bring it back to 375F before putting in the next batch of chicken.  If you are concerned at all about your chicken being under-done, stick a probe thermometer into the thickest part of the thigh…as long as you reach 165F, you’re safe.  (If you are using this recipe with a deep fryer, fry 10-12 minutes at 325F until the crust is golden and the thigh is 165F.) 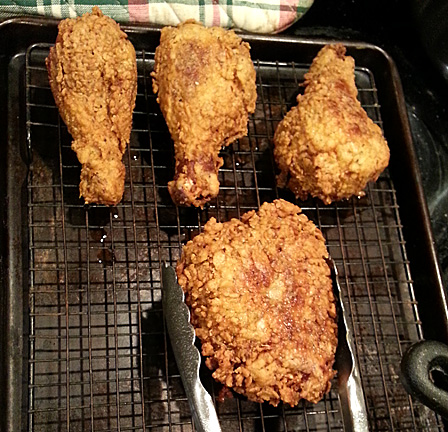 If I’m cooking for a crowd, I get 2 skillets going so everything goes faster, because you’re looking at about 15 minutes per fry batch.  So if I’m cooking 16 thighs (which serves 8 people), that’s a full hour of frying in a single skillet.

Serve this up with garlic mashed potatoes, buttermilk gravy, turnip greens with bacon and apple cider vinegar, and fresh buttermilk biscuits, and you’ve got a meal that will send everyone to heaven and back.  All thanks to the amazing power of buttermilk!

Feel free to comment below, and subscribe to my blog near the upper right corner of your screen so you don’t miss any great recipes!