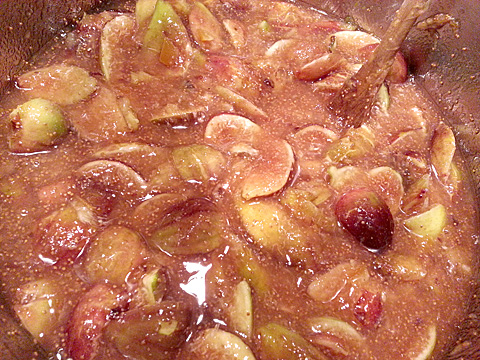 The jam just before cooking

You fall into one of two categories of humans.  The first: someone who has to pay an outrageous amount of money to purchase figs at the grocery store when they’re in season…sometimes up to a dollar a fig.

If you’re not that person, you fall into the other category.  Either you or a neighbor has a fig tree, and come midsummer, you’ve eaten so many fresh, ripe, FREE figs you don’t ever wanna look at another one.  This recipe is for THAT category of humans.  And MAN is it good.  I like to eat figs with bourbon…I love the way their flavors complement each other.  This jam tastes like a grown-up jam, but your kids will love it, too, and it is safe for them to eat because all the alcohol is cooked off.

Pick a nice mix of figs for this recipe…some that are so ripe they practically crush in your hand when you pick them…and some that are more firm that you wouldn’t want to eat yet.  And, of course, the ones that are in between.  This recipe calls for 6 pounds of figs, which you’d never be able to afford if you’re buying them at the store.  But if you have a fig tree, in July you can probably pick that many yourself in 20 minutes.

This recipe calls for pectin.  You can buy pectin in most grocery stores…it will typically be on the aisle with sugar and spices, but may be in the canning section (which may hide out near the hardware aisle, you’ll have to ask).  In a big-box store like Walmart or Target, the pectin will be in the canning section near the kitchen tools.  Pectin is a naturally occurring substance found in all plants.  In some fruits, the pectin levels are high enough that the jam will jell on its own after being reduced.  (Apples, apricots, and cherries, for example.)  But figs are low in pectin, so we have to add pectin to make the jam set up.  Most pectin is extracted from citrus peels, which are composed of around 30% pectin.  Traditional, or old-fashioned pectin, binds to the sugar molecules in the jam to create the jell.  Unfortunately, this means you have to use a crazy amount of sugar to get your jam to set up.  I prefer my jams to be lower in sugar, so I use the newer low-sugar pectins, which bind to the calcium in the jam rather than the sugar.

This recipe makes about 8 pints or 16 half-pints.  Make sure you have sterilized jars and BRAND NEW gum-rimmed sealable lids.  You cannot reuse the gum-rimmed lids for long term storage.

6 pounds figs, washed and quartered
zest and juice of 1 lemon
2-3 cups sugar (use 2 if your figs are really, really sweet)
2 cups bourbon  (you can leave it out for regular fig jam)
1 teaspoon kosher salt
5 Tablespoons low-sugar pectin

Let the mixture sit for an hour, stirring every 15 minutes.  The alcohol in the bourbon is going to unlock flavor compounds in the figs and lemons that would never be unlocked with simple cooking.

Place the pot over medium heat and bring to a gentle simmer, stirring frequently.  Then lower the heat to medium low and maintain a bare simmer until the mixture is reduced by about 1/3 and is thick and caramelized.  Stir frequently to make sure it’s not sticking to the bottom.  This process can take several hours.  You’ll know it’s ready when the watery stuff at the top of the pot is gone and doesn’t reappear after stirring.  The whole mixture will be thick and look like this: 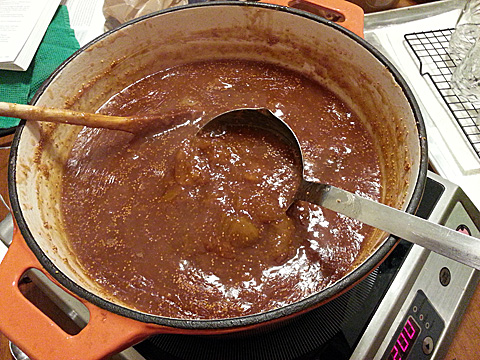 While the jam is reducing, sterilize 8 pint jars or 16 half pints.  (I do this by filling them half full of water, microwaving them until the water boils, then placing them upside down on a cooling rack in a 280F oven until dry.  You can also run them through the dishwasher on the sterilize cycle, and fill them when they’re hot.)  Place the rings and gum-ringed lids in a pot of 160F water for a few minutes to sterilize. 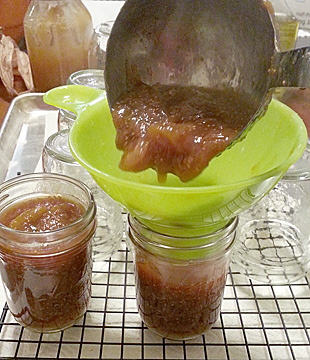 When the jam is ready, ladle the hot jam into the hot jars, leaving 1/2″ of airspace at the top, and try to eliminate air bubbles in the jam by poking them with a sterilized knife.  It’s important that ANYTHING that comes in contact with the jam be sterilized to avoid infecting them with wild bacteria.  (Sterilize utensils in a bucket of water that’s had a couple of Tablespoons of bleach added per gallon of water.)

Using a canning funnel will help avoid a big mess while filling jars.  Wipe the rim of the jar clean with a clean paper towel, or a clean rag soaked in your sterilizing liquid.  Any jam present on the rim of the jar will prevent it from sealing properly, and you don’t want botulism.

Tighten the jars snugly but NOT crazy-tight…by hand and let them cool to room temperature.  As they cool, the lids will pop down with suction.  Any lids that you can still press and they flex and make a popping sound did not seal properly.  Put these in the fridge and eat them over the course of the next month.

Fig jam isn’t just for toast and biscuits.  It’s brilliant with aged cheese.  Turn it into salad dressing.  Top ice cream with it.  My favorite mixologist, Gabe Sanchez at the Black Swan Saloon in Dallas, takes a spoon full of fig jam, torches it until it’s bruleed, and blends it into cocktails.  Uh…yum!