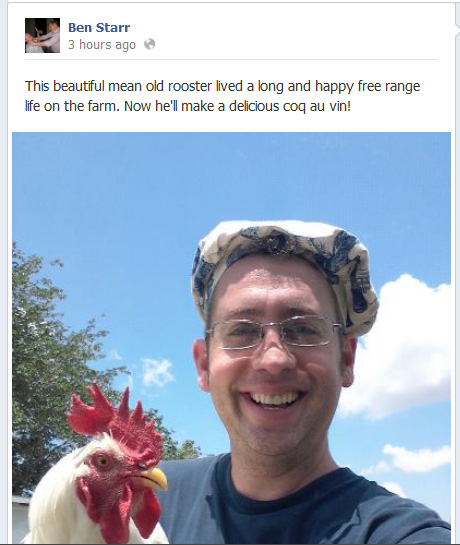 This is one of my favorite dishes on earth.  “Cock in Wine” is the translation…a mean, tough, stringy old rooster slowly braised in red wine.  It has become a French classic, but it arose from humble farmhouses, rather than sophisticated bistros.  I grew up eating dry, tough old roosters.  And any time a rooster attacked one of my siblings, I groaned because it was gonna be stringy bird for dinner.  So, based on my own farm background…rooster wasn’t the most delectable choice of meats.  But leave it to the French, who perfected every ingredient they had to work with.

While rooster meat may be tough, stringy, and dry…what it DOES have is flavor.  And lots of it.  So the technique of a low, slow braise in acidic red wine extracts all that amazing flavor, and turns the meat into tender, juicy deliciousness.

I first encountered coq au vin in the small French coastal city of Arromanches, where the Allies built their first port after the D-Day invasion of the Normandy beaches.  I was lunching at a little seaside restaurant on my very first visit to France.  The menu was all in French, and there were only a handful of dishes.  I pointed to one and my server managed to translate, “Old bird stew in wine.”  It sounded so silly, I just had to order it.  And as I sat there munching on this rich, deeply flavored stew, looking out over the quaint rooftops of this lovely French hamlet, I truly experienced French food for the first time.  It was one of my most startling culinary awakenings.

You can make this recipe with chicken from the grocery store, but it simply won’t taste the same.  Virtually all commercial poultry is slaughtered before they reach 4 months of age, and to truly develop flavor, a rooster needs to live several years on the farm, strutting around his hens, escaping wiley coyotes, attacking children when their backs are turned, and doing his best to wake every human, living or dead, within a 10-square-mile radius.  Where might you acquire such a magnificent bird?  Chances are any local farmer has enough roosters coming out his ears that he’ll butcher it and give you one for free.  Just get on Craigslist and type “chickens” to find a local chicken farmer, and send him an email telling him you’re actively looking for mean old rooster meat.  He’ll be tickled pink.

This is my own version of coq au vin, based on my favorite renditions I’ve experienced all around France.  It’s a Farmhouse-style recipe, cooked all in one pot.  You may run across fancier versions, but I guarantee you this one is easier, and tastes every bit as good!  This is not a quick recipe.  In fact, you make it the day before you eat it for best results.

Cook, stirring occasionally, until the bacon is crisp and all the fat has rendered out.  Pull the bacon out of the pan with a slotted spoon and reserve it.  Pour off all but about a Tablespoon of the fat.  Now it’s time to cook your mushrooms.  You’ll need:

1 pound mushrooms, quartered or sliced (I prefer quartering them)

While the mushrooms are cooking, get out your bird:

If you don’t have the rooster, use the largest roasting hen you can get at the grocery store, or 2 smaller “fryers.”  You can also use a big package of bone-in, skin-on thighs.  DO NOT, under ANY circumstances, attempt to make this recipe with boneless skinless breasts.  It will be inedible.  Season the pieces liberally with kosher salt and black pepper.  When the mushrooms are done, add a little more of the bacon fat and then a  few of the chicken pieces, skin side down.  Let them get all crusty and brown and then flip them onto the other side.  Repeat until all the chicken is cooked, and if you run out of bacon fat, switch to olive oil.  Once all the chicken is seared and removed from the pot, pour off any extra fat that may have accumulated in the pan.  You want about 2 Tablespoons of fat left in there.  Then add:

Season with a bit of salt and the onions will begin to give off some liquid which you can use to scrape up all that delicious crust from the bottom of the pot.  When the garlic begins to take on a bit of color, add the chicken, mushrooms, and bacon back to the pot, and add:

Let’s chat about wine.  Don’t make this recipe with cheap wine.  Just don’t do.  It will taste harsh and vinegary.  Spend a good $15 or $20 on a lovely French bottle, preferably one from the Cotes de Rhone region, or a nice Burgogne or Bordeaux.  The wine makes an even more important impact on this recipe than the bird.

Add a small amount of salt, but not too much.  The liquid is going to reduce, which will concentrate the salt, so you don’t want too much in there.  Also season with freshly ground black pepper and:

Stir well, and cover the pot.  Bring it to a gentle simmer, then place it onto the center rack of the oven and set the temperature to 250F.  Leave it in the oven for 2 hours, then turn off the oven and let it sit overnight cooling down.  The next morning, remove the bay leaves, and pull the chicken pieces out of the pot.  Debone them and discard the bones and skin.  If the liquid in the pot hasn’t reduced very much, bring it to a boil and reduce it until it’s thick.  Remove it from the heat, and return the meat to the pot to warm it gently.  You can warm it further over low heat, but DO NOT boil it once the meat is back in the liquid, or the meat will dry out and become tough.

Coq au vin is traditionally served over egg noodles, or sometimes over rice.  I don’t like either of these serving traditions.  I prefer eating it over a mound of creamy, cheese polenta, or a crispy polenta cake.  Failing that, over cornbread, or with crusty homemade bread.