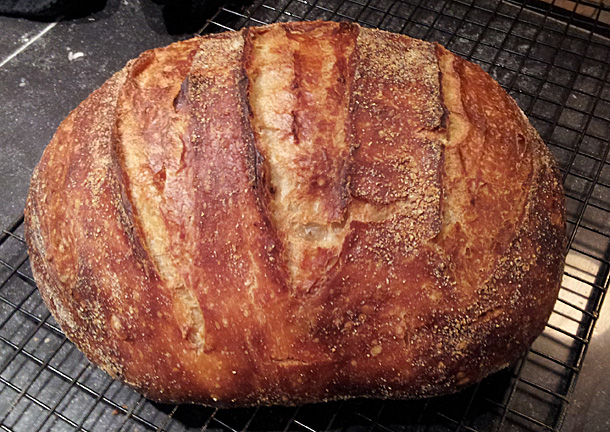 Homemade bread is one of the most delicious and satisfying things you can make in your kitchen.  I’ve built a wood-fired oven in my backyard in pursuit of that supreme flavor and texture you get from high temperature baking, but you can get near-perfect results in your normal oven if you have a cast iron or enameled cast iron Dutch oven.  There’s no need to spring for the pricey name brand Le Creuset.  You can get an off brand enameled Dutch oven for around $50 at big box stores or stores like Ross and Marshalls, or go for the raw cast iron Dutch oven sold pre-seasoned by The Lodge for around $35.  (The normal cast iron requires more care than the enameled version.)  For what it’s worth, my enameled Dutch oven is my FAVORITE pan, I use it ALL the time.  (For information on using conventional loaf pans, see the bottom of this recipe.)

The key to brilliant bread is slow fermentation (which promotes incredible crust, a moist interior crumb, and big yeasty bubbles inside) through gradual gluten development.  Most people think you have to knead flour to develop gluten.  This is the fastest, and least effective way to develop gluten. The best way is through slow, lengthy fermentation…which has the added benefit of developing actual flavor.  Our commercially produced breads, and therefore most home bread-baking recipes, call for WAY too much yeast, rising times that are far too short, and consequently produce breads that have no character and little flavor.

This no-knead overnight rising method is not new.  While Alton Brown revitalized its popularity in recent years, my grandmothers were baking bread with this recipe 60 years ago.  This method was re-introduced to me by Steve Sullivan of Berkeley’s Acme Bread Company, which was a driving force behind the artisan sourdough movement in the Bay Area back in the 70s.  Steve became interested in artisan bread on a college biking trip in France, where he noticed how vastly different their bread was from our commercial, flavorless loafs back in the US.  You can thank Steve for the fact that you can now get slow-fermented artisan bread in almost every grocery store in the nation these days.

The best breads are made with sourdough cultures…a symbiosis of wild yeasts and lactobacillus bacterias (which live naturally on our skin) that is kept alive by diligent feedings.  Neither you nor I have the time for that, unfortunately.  So this recipe is the next best thing.  It uses a proper amount of yeast…around 1/4 teaspoon of it…followed by up to 24 hours of initial rise, whereas a modern bread recipe may call for as many as 5 teaspoons of yeast (2 packages) for a single loaf followed by a 2 hour initial rise.  Which do YOU think will taste better?

This recipe is so easy and produces such a spectacular loaf of bread that my friends don’t believe me when I show them how it’s made.

The day before you want to bake bread, combine:

2 teaspoons kosher salt (or 1 teaspoon table or sea salt, NOT IODIZED!!!  That’s VERY important, iodine will kill yeast, and you are using such a small amount of yeast, your salt CANNOT be iodized)

Stir these around with your fingers.  This helps “innoculate” some lactobacillus bacteria into the bread naturally from your hands.  Then add:

12 fluid ounces (1 1/2 cups) filtered water (do NOT use tap water, which contains chlorine, which will kill yeast.  Use filtered water from your fridge, or bottled spring water)

Stir around with a wooden spoon (I use the same spoon each time, which itself becomes a storehouse for a yeast culture) until you have something that resembles dough.  Cover with plastic wrap and let it sit on your countertop for 12-24 hours.  The longer, the better.  Unlike modern recipes, you don’t want this bread to rise in a warm area.  Room temperature 65F-75F is best.

Scoop the dough out onto a lightly floured surface.  It will be much wetter and softer than when you stirred it together.  Knead it a few strokes to push out excess air.  Then twist it between your hands to form a round loaf.  Place a kitchen towel inside a bowl about the same size as your Dutch oven, and sprinkle cornmeal or flour onto the towel.  Gently lay the dough onto the towel, sprinkle more cornmeal or flour on top of the dough, and cover with plastic wrap.  Let the dough rise for 2-3 hours until double.  20-30 minutes before baking, place your Dutch oven into your oven and preheat to 450F degrees.

When the oven comes to temperature, carefully remove the Dutch oven and remove the lid.  Flour your right hand.  With your left hand, lift the bowl with the dough inside.  Flip the dough out of the bowl into your right hand, then flip it again into the hot Dutch oven.  After 1 or 2 times, you’ll get the hang of this very easily.

Using a razor blade or VERY sharp knife, score the top of the loaf several times.  Cover the Dutch oven and return to the 450F oven for 30 minutes.  Then remove the lid and bake an additional 15 minutes, for a total of 45 minutes of baking.

Carefully remove the Dutch oven from the oven, dump the loaf out onto a cooling rack, and immediately pierce the loaf in several places with a knife to let steam escape without softening the crust.  Cool before slicing. 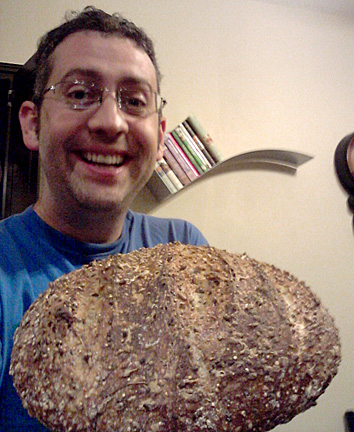 The great thing about this recipe is that it can be easily modified to make any sort of loaf you want.  Add a handful of chopped olives for Kalamata olive bread.  Substitute half the flour for whole wheat and add wheat berries and grains and seeds for a hearty multi-grain loaf.  Toss in fresh chopped rosemary and garlic.  Your imagination’s the limit!

If you don’t have an enameled Dutch oven…you should buy one.  It’s the pan I use more than any other in my kitchen.  But if you don’t have the $60 lying around, you CAN make this recipe in conventional loaf pans.  The crust will not be as good, but it’ll still be better than almost any loaf you’ve bought in the store.  The ideal pan is a glass or ceramic loaf pan, but a metallic pan will work.  You may need to use 2 loaf pans, depending on the size of your pans.  After the overnight rise, form the loaf and let it rise for 2-3 hours in a greased pan that’s been sprinkled with corn meal.  (Make sure it’s covered loosely with plastic wrap and that the top of the dough is sprayed with olive oil.)  Preheat the oven to 450F.  Remove the plastic wrap and LOOSELY cover the loaf pan with foil, sealing it around the edges of the pan, but giving enough room between the dough and the foil for the loaf to rise.  (Basically you’re making a foil tent to hold in steam for better crust development.)  After 30 minutes in the oven (20 minutes if you’re baking 2 loaves), carefully remove the foil tent.  Steam burns are possible, so be cautious.  Continue baking uncovered 10 more minutes (8 more for 2 loaves) or until the loaves sound hollow when tapped. 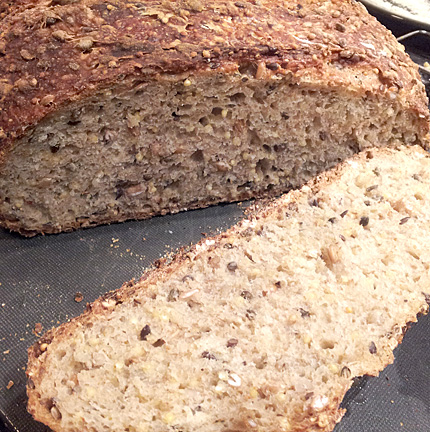 This entry was posted in Recipes, Vegetarian, Yeast Breads and tagged vegan, vegetarian. Bookmark the permalink.