Over the last few years I’ve migrated away from commercial yeast and toward my sourdough starter.  It’s gotten to the point that I don’t even keep yeast around anymore.  This means my breads have gotten infinitely better…but also take infinitely longer to bake.  There’s no such thing as “quick sourdough” anything.

So while I have developed a few quick yeast bread recipes based on commercial yeast (1-hour English muffins, 1-hour Monkey Bread), I actually can’t make those any longer…at least on the spur of the moment…because I don’t have yeast!

This morning, while trying to come up with something a little more special for breakfast than biscuits or pancakes, I decided to formulate a quick-bread recipe (ie, baking powder) for sticky buns.  In the past when I’ve tried making cinnamon rolls with biscuit dough, they ended up kinda dry, and definitely not like a proper cinnamon roll.  So I was dubious about the results.  But these turned out really REALLY delicious, so I figured I’d share the recipe.

Stir together until the ingredients are well-combined, then add:

Cut the butter into the dry ingredients.  This is easiest with a pastry blender, but if you don’t have one, you can use two knives, or simply your fingers to smear the butter into small pieces and incorporate it into the flour.  When the whole thing looks more like coarse crumbs than flour and butter, add:

With a fork, bring the dry ingredients together with the buttermilk and you’ll end up with a fairly wet dough.  Scrape it onto a heavily floured surface, sprinkle some flour on top, and flatten the dough.  Fold it in half and flatten again.  You may need to continue adding some flour to the surface and to the dough to keep it from sticking as you continue folding and flattening.  Treat the dough gently, you don’t want to over-develop the gluten.  After the dough begins to look less ragged and sticky, and more like bread dough, flatten it out to about 1″ thick, then optionally sprinkle on:

Take each dough square, gently roll into a ball, dredge in the melted butter, roll in the cinnamon sugar, and set it back into the baking dish.  Repeat until all the dough is buttered and coated: 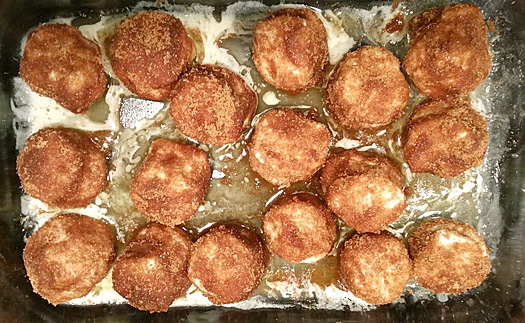 The buns before baking

Bake the buns on the center rack of a preheated 350F oven for 15 minutes, then remove them and let them sit for 10 minutes to set up.  It will look like this: 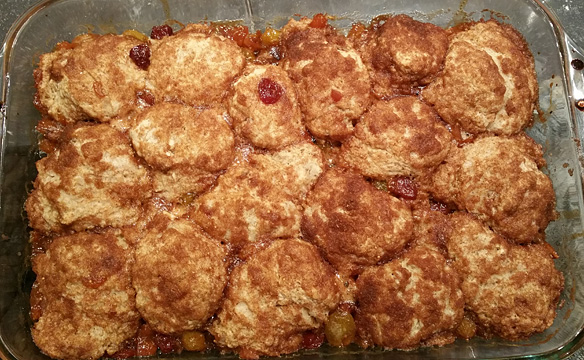 The buns after baking. You may notice some brandied fruit around the buns...I had some leftover from making stollen and tossed them in with the buns.

Spoon the buns onto a plate to serve, and enjoy!

This entry was posted in Breakfast, Quick Breads, Recipes and tagged fast, no yeast, quick, sticky buns. Bookmark the permalink.