We went to the Pyramids this morning, but due to the Eid, there were
thousands and thousands of Egyptians at the Pyramids. So many, in fact,
that the roads were shut down, and nobody else was being allowed in.

Our driver, Shokri (a former boxer from his army days) said, “Not to worry!
I take you to a friend of mine.” So we drove through a maze of back streets
and entered a tiny room where his friend greeted us and made a phone call.
Then we were allowed to drive through the police roadblock, through the
gates to the Pyramids, and directly up to them and around the grounds!
Debbie was shocked and said she had never been allowed into the Pyramid
complex in a car. 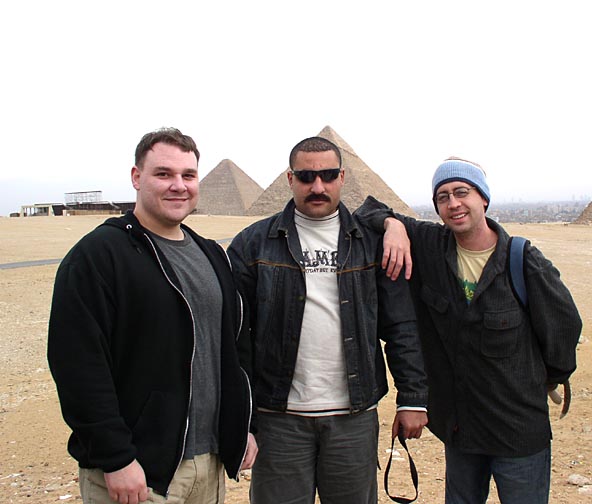 Shokri was a character. His favorite two English words are “trouble” and
“crazy.” “All Egyptian women are crazy, you know, they are crazy! They
give you much, much trouble. So crazy, they are, give lots and lots of
trouble.” While Shokri only has one wife and two daughters, his older
brother has three wives and 11 sons and 1 daughter. His uncle has 23 kids
and six wives.

Understandably, the Pyramids were totally chaotic. But because the mass of
visitors was primarily Egyptians, we attracted the lion’s share of hasslers
and hustlers, offering camel and horse rides, offering to show “secret”
passageways to the insides of the Pyramids… There wasn’t a single moment
of peace, we were literally assailed at all times. 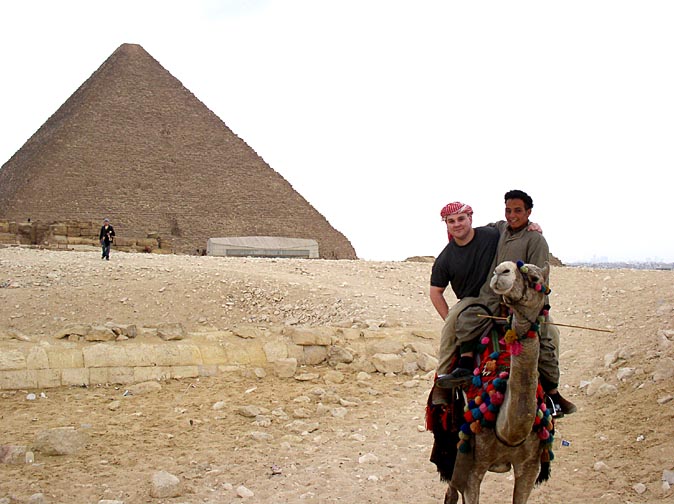 I’m glad I had my first experience at the Pyramids with Justin four years
ago, when it was relatively quiet in the aftermath of September 11. J-P’s
first experience there was stressful, but he was still very impressed. He
even took a short ride on a camel named Charlie Brown.

We also got to see Pharoah Cheops’ funerary ship, which was built out of
massive cedar timbers from Lebanon, and which was used to carry his mummy
downstream to Giza from the palaces at Luxor. The ship was HUGE, with
magnificent curled ends like Viking ships and huge oars 20 feet long. It
was just unbelievable to see! The timbers were easily a hundred feet long
each, and six inches thick. I have no idea how they bent them to form the
boat’s hull. The ship was almost perfectly preserved in its own rock tomb,
and was discovered in the 1970s.

We strolled down to visit the Sphinx after we were done at the ship museum.
The Sphinx is under restoration, so we couldn’t get very close to him. And
he is, undoubtedly, the most popular attraction at the Giza complex, so the
crowds were swarming. But it’s still so incredible to see such a
magnificent monument…it’s one of the most recognizable sights in the
world. Every child from Papua New Guinea to Venezuela knows the Sphinx. I
was also impressed that the floor of the Sphinx’s temple was paved in
beautiful alabaster.

Shokri drove us to downtown Cairo and dropped us off at the Nile, where we
arranged to have a felucca (an Egyptian sailboat) take us out onto the river
where we could eat our picnic lunch. It was chilly (in the low 50s today)
but still so peaceful as we drifted along with the current of this ancient
river that gave birth to the greatest civilization in ancient history.

After that, we strolled along the Nile to Lover’s Bridge, a popular meeting
spot for young middle class Egyptian teenagers, and not necessarily a
romantic destination despite the name. Everyone was dressed to kill,
walking hand in hand. There is no taboo regarding physical affection
between anyone: friends, lovers, family…male and female, female and
female, male and male, they all walk hand in hand, laughing and celebrating.
It was really an amazing place, full of energy.

Then we ran errands to prepare for the dinner party we’re having tonight
with all of Deb’s friends in Cairo.

Tomorrow we’ll go to the Khan el Kahlili, one of the largest bazaars in the
world. It’s many blocks long, many stories high, and its dusty corridors
hide antiques, faux antiques, glass makers, spice vendors, tin
smithys…everything you could possibly imagine…

Wow. So much has happened today that if I had started to write it all down in my journal, I would have been writing nonstop and nothing else would have happened. The unfortunate side to this is that I have lost many little details to oblivion. The wonderful side of this is that if I had been in journalist mode the entire time, I wouldn’t have experienced it all the way I did.

I expected this trip to Egypt to be rather sterile… It’s J-P’s first time here. We only had 48 hours. We were basically going to see the pyramids and go shopping, and meet Debbie’s friends. Touristy, sterile trip.

Boy, was I wrong.

At the dinner party last night (which was FANTASTIC…Debbie’s friends are a very international bunch, lots of Brits, Canadians, Aussies, Scots, Germans, and all have lived in many countries all over the world) I was helping clean up and I asked if Cairo had a recylcling program.

“Great! Then where do I put these cans?”

“You just put EVERYTHING in the trash, and every bit of it is sifted through manually and sorted.”

In a city of 16 million people? Every bit of trash is sifted through manually? 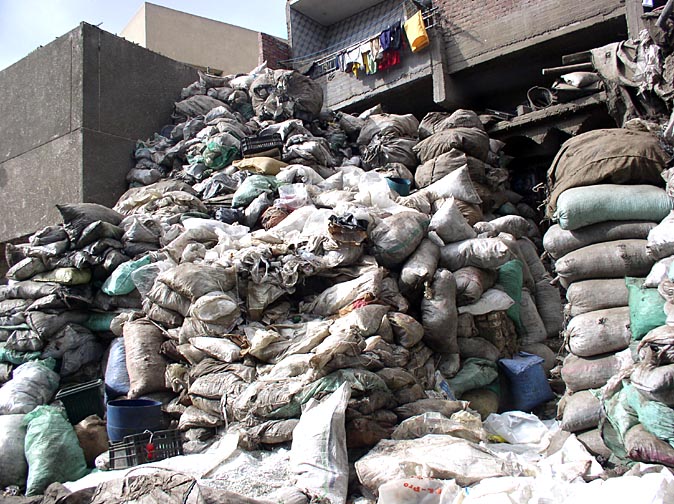 This is somebody's home

It’s true. Up on a desert hilltop is a group of people, the Coptic Christians, who were “exiled” there by the Cairenese governor in the early 1970s. Their birthright is the garbage of Cairo. They can have it, free of charge, to do with as they will. Their only obligation is to pick it up from people’s homes, carry it discreetly away, and remain in the Moqattam district.

Sounds like a terrible deal. And it is. But not unprofitable. The Coptics ask for 5 Egyptian Pounds per year from each resident (just less than a dollar…per year) but they do interesting things with the garbage. With the organic waste, they raise pigs…more than 60,000 of them. The Muslims don’t eat pork, but the Coptics certainly do, and so does the expat population. So they can feed themselves, and make a bit of profit on the side. With the cloth and paper waste, they make fabric products and paper, which they sell in shops across the city and export to specialty stores around the world. With the plastic, aluminum, tin, and glass waste, they resell them for various uses (recycling and secondary products). And they are so efficient that the UN believes that Cairo recycles at least 80% of its waste…a good thing in a city with 16 million residents (probably more) that’s considerably smaller in land size than the DFW metroplex.

There are many downsides. The garbage is gathered and carried on donkey-pulled carts through the insanity of Cairo traffic, up very steep hills to Moqattam. You can bet that the thousands of donkeys employed by some 30,000 Coptic garbage collectors are not treated well.

Children in the streets of Moqattam

Also, all the garbage is sifted through manually. The Coptics live and work in the midst of impossible filth and stench, and therefore have a life expectancy of 40. In general, they are the poorest of the poor, and do not benefit from the tithing of the Muslim community. 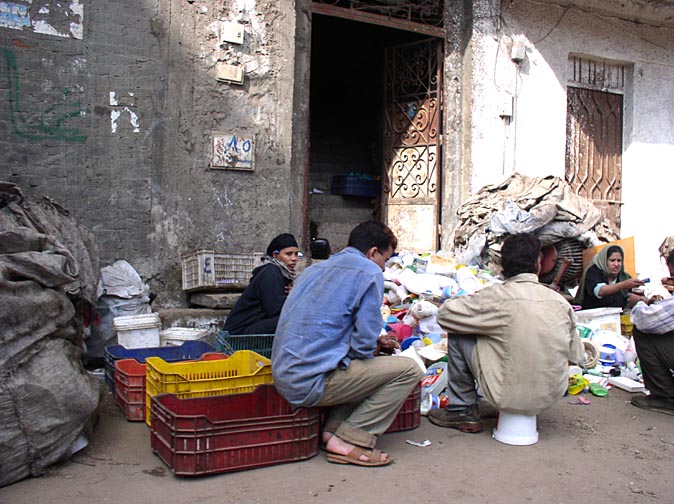 Every last bit of Cairo's garbage is hand-sorted

(Coptics, by the way, claim to be the original Christians, descended from those who sheltered the holy family when they fled the wrath of Herod the king, who killed all first-born children in the holy land. The Coptics predate both the Catholic church and Islam.)

So after Deb’s friends had informed us of the intrigue and horror of Moqattam and the Coptics, there was nothing left to do but go.

And go we did, bright and early this morning. 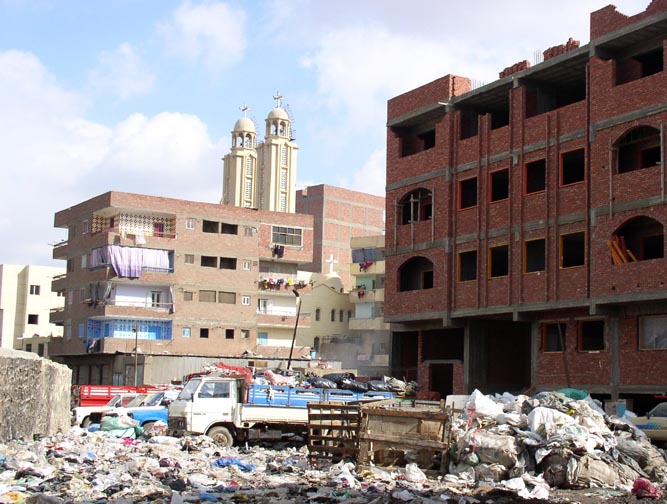 Moqattam, the Garbage City of Cairo

At this point, the words run out. Because there’s just no way to describe the smell. The piles of garbage, each with a woman and child in the middle, sifting through. The massive bags of sorted garbage stacked 10 feet high lining roadways and alleys. Rotting carcasses being gnawed by dogs, with children eating things that didn’t look much fresher only a few feet away. We saw two men riffling through a massive bag of used hypodermic needles, goodness knows what viruses and bacteria might be breeding on their sharp tips. And the flies…

Gut wrenching, to be sure. I was profoundly…horrified? Disgusted? Depressed? I still don’t really know how I feel about it.

One thing is for sure…a city of this size and density in a country this desperately poor has no better way to clean and reuse its waste. If all that trash were simply cast into the canals and alleys, as it is in the poorest parts of the city, Cairo would be one big pit of disease and decay. Instead, it incinerates or disposes of the amount of garbage of a city a fraction of its size, and while the Coptics suffer miserably for it, they find a way to profit from it.

After that, J-P and I were dropped off in front of Cairo’s most important mosque, the Mosque al Hussein, where Friday afternoon prayers were taking place.

Not because of the risk of theft or assault…these things are unheard of in Cairo. But because this particular mosque is where the most devout (and in some cases, most extreme) Muslims come to pray, and Friday afternoon prayers are the most heavily attended of the week. 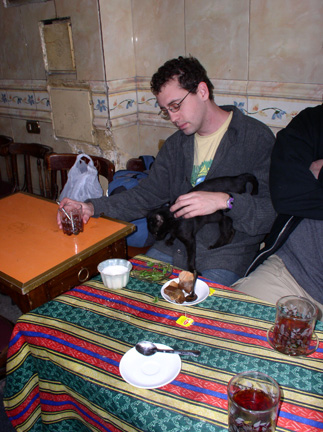 Tea ("shai") and a street kitty in Cairo

How exciting! We ducked into a tea shop and enjoyed some of that incomparably good Egyptian tea while we waited for Debbie to join us.

We didn’t have any trouble, and everyone around was very nice.

Then it was off to the Khan el Kalili, the massive bazaar, for some shopping. This place is cavernous…blocks and blocks and blocks, alleys upon alleys, many stories high. Debbie is a first rate shopper, and she’s been coming to the Khan frequently for five years now, and she even admits she has yet to scrape the surface. Some estimates are that there are 3,000 shops, but there are probably more.

We honed our bagaining skills, but Debbie’s presence helped greatly, because she took us to shops where she knew the owners and they gave us incredible prices we’d never have gotten as regular American tourists.

Tonight we went back to Giza and sat on the rooftop of a building a stone’s throw from the Sphinx. We had an incredible Egyptian dinner, puffed on apple-y sheesha, drank Turkish coffee so thick it crawled down our throats on its own legs, and watched the Pyramids glow…these incredible monuments that remained the highest buildings on the planet from 2560BC until the Eiffel Tower was built in Paris in 1889AD. For more than 4000 years they were the greatest achievement of man, and they’re no less impressive today, from the rooftop of a modern cafe.

After all these millenia, still the 10th tallest building in Egypt.

We are exhausted. Tomorrow we fly to London, and I’m not sure if we’ll have internet access at the friend’s home where we are staying, so you may not hear from me until we return to Dallas on Sunday or Monday.

Be happy you live in a city with garbage collection!