Posted on March 23, 2012 | Comments Off on MasterChef: Mothers and Benedicts

So they drive us to Pasadena and drop us off at this MASSIVE swanky hotel, and I’m immediately afraid.  If I have to cook cuisine that matches the sophistication of this place, I’m screwed.

It’s a team challenge with Tracy and Giuseppe as team leads.  I couldn’t be more conflicted about whose team I want to be on.  I adore Tracy, and Giuseppe and I have had this playful competitiveness going on about who cooks better Italian so we have a great rapport.  Giuseppe takes me second, and assembles a great team which includes Alejandra, Derrick, and Suzy.  Definitely people I can work with.

Then we find out that we’re cooking for the judges’ mothers.  Wow…  Among the three is Lidia Bastianich, a legendary celebrity chef.  She’s like the Julia Child of Italian food.  She’s been teaching America to cook authentic Italian food on TV for decades.  Then we’ve got the mothers of Graham Elliot and Gordon Ramsay, two of the world’s greatest chefs, who are undoubtedly accustomed to fabulous cuisine, and have the “balls” to blatantly critique their sons when they fail.  So what are they going to say to us?!?

Giuseppe has a quick conference with the moms to find out what they like and don’t like, then he announces a very Italian menu for the first two courses, and apple pie for dessert.  I can bake a mean apple pie, but I’m not sure it goes with an Italian meal.  The first course will be a crispy polenta cake with a dressed salad on top, and that makes me nervous, too.  You can’t make crispy polenta in one hour.  It just can’t happen.  The second course will be spaghetti carbonara, and if anyone can make some homemade pasta, it’s Giuseppe.

Everything comes together perfectly…except the crispy polenta.  It wasn’t crispy.  So we covered it up with a yummy salad and sent it out to the moms, and they loved it…even more than the other team’s carrot ginger soup.  Which is saying something, because apparently I announced to the world that “If there’s one thing I know, it’s that old ladies like to eat soup.”  I don’t think I’ll ever be forgiven for that comment.  (Funny thing, I don’t even remember saying that!)

The carbonara goes out with boxed, store-bought pasta, which leaves everyone on our team flabbergasted, except for Giuseppe.  (We thought he was going to hand-make the pasta, but he tells us that carbonara is ALWAYS made with dried pasta because it needs to be very al dente, or firm, to be authentic.)  It gets high marks from Lidia Bastianich, which is rare praise, indeed, for Giuseppe.  Still, the other two moms go for the other team’s fish dish.

Naturally it comes down to the dessert.  Suzy and I made the dessert…I did the filling (and peeling and slicing all those apples was a horrific throw-back to the apple challenge) and Suzy did the pastry.  The moms loved both desserts, but apparently our crust was a little too thick for their taste, so they go with the other team.  Which means we’re headed to a pressure test.

No one LIKES going into a pressure test, but the last pressure test garnered me the highest praise thus far in the competition, so maybe I can repeat the performance if I get a really good challenge.

I literally jump out of my skin, screaming with joy.  This is one of my signatures.  For Sunday brunch at LEAST once a month I make eggs benedict for a small crowd, and everything is from scratch…I even make the English muffins.  I’m back in my element.

The first trick is perfectly poaching an egg…something many cooks find intimidating.  You always see all sorts of crazy techniques, from swirling the water in the pot to using the microwave.  I learned how to poach an egg flawlessly every time from the great Julia Child.  You poke a tiny hole in the big end of the egg and lower it into simmering water for 10 seconds and then remove it.  The water invades the inside of the shell and firms up the egg inside, so when you crack it into the water, it forms a perfect shape just like an egg.  No need to swirl or anything!  Just make sure you have about 1/3 cup of white vinegar per gallon of water, keep the water below a simmer…just a few tiny bubbles rising to the top.  Crack the egg directly over the surface of the water so it gently slips in.  Then leave it for exactly 4 minutes.  Quickly remove the egg and dunk it into ice water to stop the cooking.  Then gently reheat it for a few seconds in hot water before serving.

The second trick is hollandaise, one of the classic “mother sauces” of French cuisine.  Hollandaise strikes fear into the heart of almost EVERY chef.  It’s notoriously tricky to make.  One wrong step and it curdles, overcooks, separates, or weeps.  Hollandaise is NOT good for you.  It’s basically a ton of egg yolks and butter whipped together constantly over gentle heat until it thickens and gets fluffy, and then it’s flavored with salt, lemon juice, and a dash of cayenne pepper.  I learned to make perfect hollandaise from Alton Brown, who uses whole butter cut into small cubes, which allows it to emulsify slowly into the egg yolks.  Classic hollandaise is made by first melting and clarifying butter, which removes the milk solids and results in a more refined sauce, but it takes time and there is more risk of error.  Most chefs can’t tell the difference between a whole-butter hollandaise and a clarified-butter hollandaise unless they’re told which method was used.  Unfortunately, the judges visit my station multiple times and see how I’m making it.  And they make their disgust for my shortcut clearly known.  They get even more furious with me when they see other contestants making whole-butter hollandaise.  (Just a few nights before we were all talking about hollandaise and I showed them the method I use…and it’s so easy and foolproof, many of them chose to make that version for the pressure test, much to the chagrin of the judges.)

With seconds to go, I griddle the muffin and ham in butter so both are nice and crispy and brown, slip my perfect poached eggs on top, and then gently drape the sauce over everything.  It’s the most beautiful benedict I’ve ever made, I’m SO proud.  And if the judges hate me for using whole butter…go ahead and hate me.  My sauce looks and tastes great.  If that method is good enough for most restaurants and for celebrity chefs on TV, it’s good enough for me!

Though they’re clearly upset with me for “shortcutting” the hollandaise, they send me upstairs, safe.  Suzy follows me, followed by a tearful Alejandra.  Derrick and Giuseppe are under scrutiny.  One of the yolks has escaped from Giuseppe’s egg and made a mad dash for freedom, and there it sits over to the side of his plate.  Derrick ran out of time and didn’t get his hollandaise on top of his benedict.  Two big, scary mistakes.

The judges decide Giuseppe’s mistake is the greater of two evils, and they send him home, but with fond words.  Giuseppe kept us all in stitches…he’s probably the funniest person I’ve ever met.  And man can he cook.  I will really miss him. 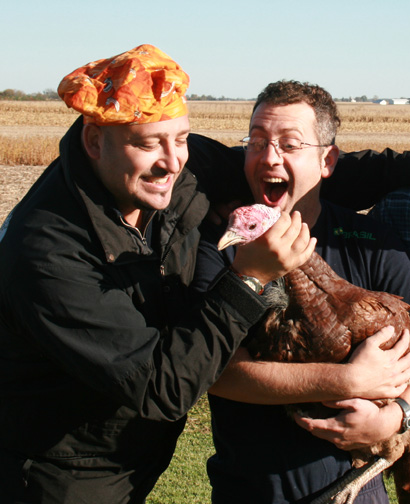 Choking the Turkey (No turkeys were harmed)

Now we’re down to 9, and I’m still in the game.  It feels surreal.  So many brilliant, talented people have gone home.  I’ve been really fortunate that the pressure tests have just happened to fall in my category of strengths.  But I’d rather not be dealing with them at all…  Maybe I’ll survive long enough to reach another team challenge, and maybe, with a bit of luck, I’ll get to watch the next pressure test from the balcony…

Comments Off on MasterChef: Mothers and Benedicts