The renovation was something of a distant pipe dream until I spotted an ad on Craigslist for flagstone.

“We just moved to a new home in Colleyville and our back yard is all covered in flagstone. We have two kids and two dogs, and we really need grass out there. My husband has stacked up all the flagstone into piles. You’ll need a wheelbarrow to get it out of the back yard to the driveway. There’s a lot, over 1200 square feet. $500 for all of it.”

The reason the renovation had been a pipe dream was because the cheapest quote I had found for enough flagstone to cover our back yard had been in the $5000-$6000 range. JUST for the stone. That doesn’t include all the stuff that has to go BELOW the stone before the stone can go down.

I called the poster immediately and within a few hours I had rented a truck, a flatbed trailer, and my friends Chris, Christian, and I were headed to Colleyville, a 30 minute drive from the house.

The flagstone was thick…between 2 and 3 inches…which was good because it would be sturdy. But it wouldn’t be easy to transport. There were some slabs of it that were four feet long and five feet wide that weighed several hundred pounds each.

We loaded the truck and trailer until the axles were about to break, and had hardly made a dent in the piles left in their back yard! This was going to be a serious project.

Three trips later we were so exhausted we could barely move. Christian called in sick to work the next day, knowing we were only half done, and knowing exactly how sore we’d be!

The next morning we could barely get out of bed, our arms and legs were shrieking in pain! But we had to get the rest of the stone. So we grunted and groaned and made three more trips. And finally, 36 hours later, the back of the house was lined with stacks of massive flagstone. 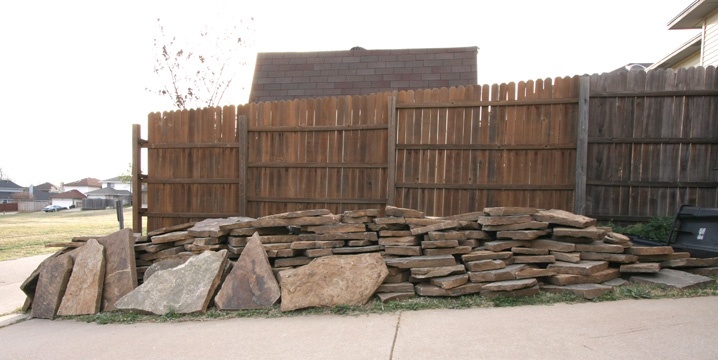 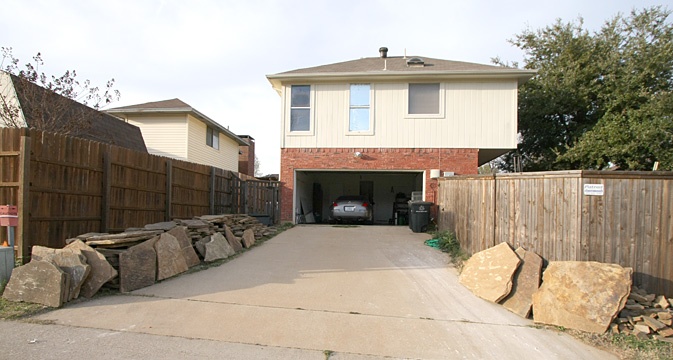 NIGHTMARE!!! But we had saved over $4000 by doing the Craigslist thing, so the sore muscles, smashed fingers, and chafed palms were definitely worth it!

Before the flagstone could go down into the backyard, though, we needed a substrate…or a prepared surface to lay them on. You CAN just lay them right on the ground, if you’re lazy. But it won’t look professional, the stones will rock back and forth on uneven areas, the joints between stones will not stay filled, and you certainly can’t get it level enough to build on.

But before you can lay a substrate, the ground below the substrate has to be leveled, and then you need some way of keeping the substrate held in so that it doesn’t spill out everywhere. MAN this is a big project!

Comments Off on Backyard Renovation, March 2009