So I’m about to head to Havasupai for the third time. It’s an Indian reservation off the south rim of the Grand Canyon. The village of Supai, in the canyon bottom, has been continuously inhabited by the Havasupai tribe for more than 1,500 years. There are no roads there, and Supai is the last place in America where the US Mail is delivered by mule train.

I first went there with Kirk, Jessi, and Melodie (college pals) in 1997 to celebrate my decision to leave Abilene Christian University. It was a wild trip, taken in a 1979 Toyota Corolla, and involved the digging up of bombs on the White Sands Missile Range, the pursuit of lesbians through bat-guano-infested lava caves, and our first vision of Havasu Falls…undoubtedly the most beautiful waterfall on earth. (Havasupai is full of eye-popping waterfalls.) On that trip I purchased a pair of Coleman hiking boots at the Wal Mart in Winslow, Arizona for $19.95. They took me 10 miles into the canyon, 10 miles further to the Grand Canyon, and back out all the way without a single blister.

I returned to Havasupai years later with Monty and Julie, and Matt and Sue (from Australia), and we discovered the incomparable joy of helicoptering out of the canyon (saving a 12-mile hike up to the canyon rim with a heavy pack on your back). I was wearing the same boots.

After that, the same boots proceeded to carry me across all 7 continents and well over 1,000 miles of trail without a single blister, until my most recent climb of Guadalupe Peak, telling me that they are due for well-deserved retirement.

Now I return to Havasupai with Monty, Dave, and Nate on the 10 year anniversary of meeting them. Monty and Nate are bringing their delightful wives. Dave is driving from Kentucky to Arizona via Illinois to be part of the affair.

And I’m going to try my best to make the hike down into the canyon in my Wal Mart boots. And I plan to leave them in a secret corner of the canyon, perhaps with a little note. Maybe, when I’m 60, I’ll find my way back to Havasupai to see if they’re still there. 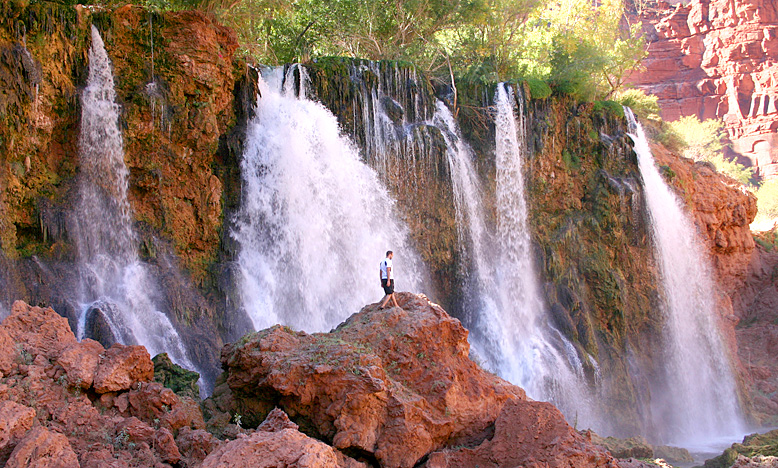 The new Navajo Falls, created by the great flood of 2009