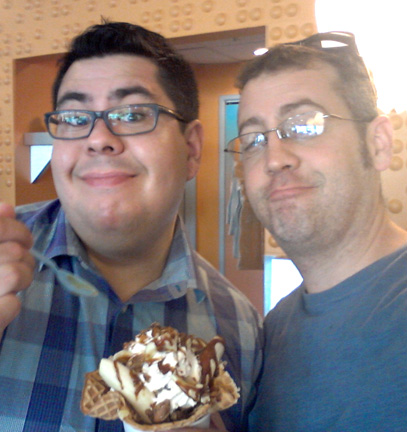 If you haven’t yet read my blog about the last episode of MasterChef, you might wanna check it out!  I’m about an hour from posting my blog about my weekend in Phoenix with Monti Carlo and David Martinez, but David just submitted a response to my blog about that episode, and it was so raw and powerful, I just had to share it.  Thank you, David, for your eloquent response…it really moved me:

“Where do I start? Thank you all for the support, thank you to Ben Starr for a great weekend, and being amazing enough to write this. Thank you to “Monti” for being an incredible big sister that I so desperately have needed for 32 years. I am a sensitive person, I didn’t realize how sensitive until I met Monti. I needed someone like that in my life. My older brothers taught me to be tough, stand up strong and open doors at the break of hinges. I didn’t realize that assuaging doors open is easier. Thank you to Masterchef and its entire team for allowing me to showcase my skill on center stage. I have been so scared to go into a commercial kitchen because, I went to school. I am deeply in debt and felt scared to not use those pieces of paper I own. I am no longer scared and for that I am grateful. Finally thank you to all the harshest of the harsh critics. It took me a long time to figure out why I was doing so bad on the show and in reading all of the horrible comments, and I do mean horrible, I found out the reason. Its simple really. I have been cooking since I was six. I have since then put out plate after plate of great food. It was time to grow, just like a teenager we all go through our growing pains and it is too bad mine have so far played out on camera. I was blocked by my own ability to think outside of my kitchen. Every chef goes through chefs block, when it happens to the best, they go to the south of France, or Finland, or Bornio. Me, I sat on a stage wilting under the intense scrutiny of the camera unable to hide my errors. I was tired, hung over, over caffeinated and under appreciated. I will not lie it was my lowest culinary point.

Where to go next, ah yes the rice. What a contentious issue huh. Will you or wont you. Fact is early on in the competition we all decided that by hook or crook we wanted the best to continue. We decided we would play this game straight. We decided as a collective that when a person left we would mourn their exit as a friend. We decided that no matter what, we would help each other out, because if you go home it should be by your own hand, not by game play. It was the only way to play this game, you can thank all of us for this. I would walk around and often say, it doesn’t matter if I give you the exact recipe, if you cant execute, you will go home, “by your own hand.” Josh on camera did not raise his hand, in reality he didn’t, he kept his hand down, but guess what, I know, for a fact, 100% because I trust Josh, and I know Josh, that no matter who was missing that rice, if he had it, no matter if he had his hand up or down, he would have given up the rice. At the end of the day, as you saw on camera, according to the court of marsupials, it didn’t matter. My dish was “inedible.” I have never argued one of their decisions, that dish was not perfect, but by no means was it the worst. I stand behind that dish 100% even now. Salt agave caramel, rice pudding with cardamom, clove, cinnamon is a classic combo. Candied pepitas, come on, sounds great. I liked it but I am not part of the opossum Party.

I didn’t taste Felix’s dish, I frankly didn’t even look at it. Do I think I deserved to go home though, no, no way, not that day. If there was ever a day I should have been eliminated, it was the double elimination day. See above all else here is the thing, I wanted the best to continue, I am not a judge though and since I didn’t go home some weeks back, I assumed I didn’t have the worst dish.

The popular opinion is that I should have been sent home because I forgot my rice. How could I squandered this advantage. The show is Masterchef though, not Masterchef advantage taker. I did forget my rice but, would I have sat there and made nothing. No way. I would have made a granita, liquado, atole, corn pudding, corn muffins with a caramel center, corn lava cake, corn tamales with a cinnamon sugar sauce, corn churros. There were dozens and dozens of things I could have made with my basket. Why then did I run around asking for rice? Thats a story for another day.

Finally, Dayvid Mahtines vs David Martinez. These are two completely different people. The former is a shell, a soft person with low moral standard, a person who seems to trip and fall into golden circumstances. The former is a weak cook with little to no skill. Vastly empty cerebral fissures who can not put a coherent thought together. Blubbering, often whining, seemingly interesting and little to no fire inside. The former is a petty, self loathing character.

The latter is intelligent, full of self assurance, confident but never cocky. Little to no fear of the unknown or or failure because of the lesson. The latter walks through live with purpose never looking back on a decision. The latter makes things happen and doesn’t wait until something falls in his lap. The latter has strength and poise, and a fire in his belly for the things he loves, mainly food and music. The latter is well spoken, versed in language and etiquette. Fighter, lover, kind heart and forged in the fire of life.

People who have met me like Tim and Ben are lucky because they get to see behind the looking glass. They get to see behind the camera. When they taste the food they understand why it is an utter disappointment to me why I fell so short. The times I’ve gotten to talk to them it was a blast. I will not defend my time on the show so far because really that isn’t me, I don’t consider that a person, I consider that a character I inadvertently played. Im fine with that. What I will say is how that character affected David Martinez is very real. The harsh criticisms, the untimely jokes, and most of all the utter surprise when people realize I can really cook. I didnt get on because of my good looks, or my awesome smile. I got on because I put out solid food. I went into commercial kitchens and ground out a path. I have a good time on line, and I will continue to have a good time, even while studying for my PhD.

So whats next well we are in the top six. I moved to Phoenix and am wrapping up some last minute media stuff in Chicago. I start school August 23rd and arrive on August 20th for my permanent stay. I will apply at some restaurants and set up my first supper club. It will be a taste of Chicago dinner. I will save and hopefully in a year open my own place in Tempe. I will continue to cook until I reach my culinary goal. As for now I was so moved by the response to this article I had to write something. Thanks Ben and thank you all.”

David, I treasure our new friendship and can’t wait to see what wonders you unleash upon the lucky Phoenix metro area.  And I can’t wait to eat those PHENOMENAL flautas again!!!