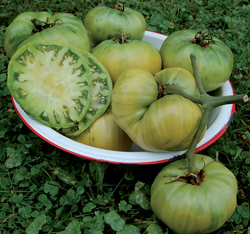 It’s early January, the dead of winter, and the warmth of summer seems an eternity away. It’s in times like these that I like to fantasize about my favorite seasonal fruits and veggies which are at their best in the warm months, to help get me through the current famine…

You see, in my home, we try to eat seasonally. Our country has become spoiled by the loss of seasonality. You can get tomatoes, peaches, eggplant, watermelon…things that normally only grow in the summer in Texas…365 days of the year. This is because right now in the southern hemisphere, peaches and tomatoes and eggplant and watermelon are growing, and someone thought it was a good idea to pick them green before they ripen, put them on a ship, sail them to the US, put them on big trucks and trains, ship them to our cities, gas them with ethylene to make them artificially ripen, and put them on our grocery store shelves. And by that time, the only thing they do is LOOK like themselves. They certainly don’t taste like themselves. 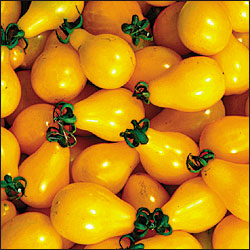 If you happened to live in France or Switzerland or Germany at this particular time of month, and you went to the supermarket, you’d find potatoes, rutabagas, broccoli and cabbages, turnips, and other root veggies that store well or that grow in the cold season…and that’s about it. You certainly wouldn’t find any fresh fruit. You might find some hot-house grown tomatoes, which would be expensive and tasteless. And you can bet that the good people of Europe are EAGERLY awaiting the growing season so they can taste fresh fruits and veggies again. And you can bet that the first time they bite into a ripe, juicy tomato or a plump peach…a shiver runs down their spine and they SAVOR it.

When was the last time you SAVORED a tomato? Probably never, because you can buy them in the grocery store all year long. You never MISS them. Which is a shame. 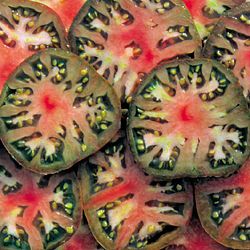 But it’s not the biggest shame about tomatoes. The biggest shame is that, even in the peak of summer, when local tomatoes are falling off the vine, the tomatoes in your grocery store are still coming all the way from the central valleys of California, where a couple of tasteless varieties of tomato have been commercially bred to produce thick-walled, juiceless, “tough” tomatoes that will last for the thousands of miles on a truck before they get delivered. They are still picked green for the transit, gassed with ethylene when they get to the local distribution center, and then begin to artificially ripen as they are sent to your store. This means the taste and texture of the tomato are completely unnatural. (And they wouldn’t be much better if they were allowed to ripen on the vine…these few varieties of commercial tomatoes have been so selectively bred for “transport and shelf life” that they have no taste anyway.)

The first lesson here is that quality canned tomatoes, which are generally picked vine-ripened and canned within a few days, are often of much higher quality than fresh tomatoes. You can disregard anything you see on TV…especially reality TV…criticizing people for using canned tomatoes over fresh. Those are sensationalist comments designed to heighten drama. Unless you’re getting an heirloom variety tomato from your local Farmer’s Market or your own backyard garden, canned tomatoes are almost always going to be better than fresh. And they are usually cheaper, too! (A premium brand of canned tomato, like San Marzano which are imported from Italy, may even be better than what you can raise yourself!) 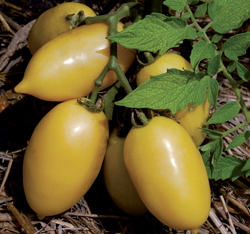 Then comes the problem of salads…because you certainly don’t want to use a canned tomato in your salads. In that case, plum or cherry tomatoes are often your best bet in terms of sugar content. They are generally more expensive than a slicing tomato, but the taste is infinitely better. In the winter, I just don’t put tomatoes in salad. There are a host of other yummies to go in salad which generally don’t have to be shipped from Peru or Chile, like radishes and carrots and beets. Many root veggies and most of the cabbage family (including cauliflower, broccoli, kale, and Brussels Sprouts) can be grown in the US during the winter, or they are of such a variety that they will keep for months after harvest.

The only true tomatoes that have true tomato flavor and texture are the heirloom tomatoes. If you take the definition from the local gourmet market, this may make you think that an “heirloom” tomato has to look all weird…be wrinkly or purple with green stripes…in order to be an heirloom. This isn’t true. “Heirloom” vegetables simply mean vegetables which are propagated from seed each year, rather than a hybrid where varieties of tomato are cross bred to produce an offspring that has “superior” traits, but cannot then produce its own viable seeds. And the parent plant of an heirloom variety passes its characteristics down to its offspring, which slowly change over time as the plant adapts to its local environment. The seeds are typically kept in the family for generation after generation, and after a hundred years or so, that particular tomato is unlike ANY other tomato anywhere in the world. It is unique. Many times unique to a SINGLE garden. 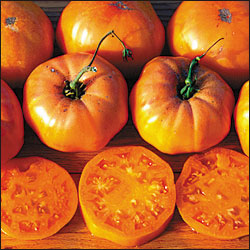 Which means there are thousands…if not TENS OF THOUSANDS…of varieties of heirloom tomato. And with the recent surge in urban gardening, there is increased interest in growing and preserving these types of tomatoes, which have thin skin, explosive flavor, loads of juice, firm meaty texture, and come in a ridiculous array of sizes, shapes, and colors, from the tiniest of tomatoes the size of juniper berries, to fat tomatoes that approach a few pounds each, from cherry red to purple to green to white to yellow to black to zebra stripes.

The heirloom process takes several generations, but in the great scheme of human existence, it has happened rapidly. As early as Biblical times, the tomato, as we know, it didn’t exist. It was a spindly plant growing in the Andes mountains of South America that produced a yellow berry that was poisonous, which we now call “nightshade.” During times of famine, people were forced to eat unpleasant things, and the largest and fattest of the yellow berries were harvested. Those that didn’t taste too awful, and didn’t make the eater too sick, had seeds that were saved to plant for the following year. Eventually, through human selection, the mildest and juiciest plants were saved and improved, until the tomato became an important food item for the ancient peoples of South America. 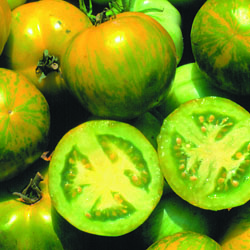 In the middle 1500s, the tomato was discovered by Westerners and brought to Europe. It was still yellow at that time, and through the heirloom process, hundreds of strains developed over time as the tomato adapted to unique growing conditions over generations. Eventually it re-reached the Americas in more modern times, and in 500 short years, we have thousands of varieties of what once was a poisonous plant that only grew in the Andes mountains.

While the tomato is technically a fruit (as are cucumbers, sweet and hot peppers, eggplant, okra, beans…ANYTHING that wraps around the seed of the plant, and thus MOST of the veggies you eat are actually fruits), by legal definition the tomato is a vegetable and is taxed as such when it’s imported. The law tends to define vegetables as the things we eat during the main part of the meal, and the things we eat for dessert or for breakfast are fruits. (Though good tomatoes are sweet and many people eat them for breakfast!) 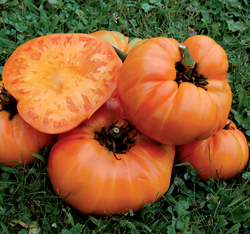 A lot of people don’t know that when you store a tomato in the fridge, it loses its taste and texture…permanently. (Another reason commercial tomatoes, which are shipped in refrigerated trucks, are no good.) Enzymes that naturally exist in the tomato, which trigger the ripening process which develops flavor, are deactivated by cold temperatures. So the tomato stops naturally ripening the instant it gets cold. The enzymes, instead of breaking down sugars inside the tomato into complex flavor and aroma compounds, break down themselves. As they do, the cell walls of the tomato become weak and lose the moisture locked inside, so the tomato becomes mealy and mushy in texture, rather than firm and juicy. You can bet that ANY store-bought tomato was refrigerated at some point, whether or not it’s in the refrigerator shelf at the store. But if your local produce manager puts his tomatoes in the cold area, he is out of his mind and you should tell him that! Likewise, never put a tomato in the fridge at home. Leave it on your countertop. If it starts to get overripe, cut off any dark, soft spots and eat the rest immediately as a snack. Or add it to a soup or casserole or sauce. 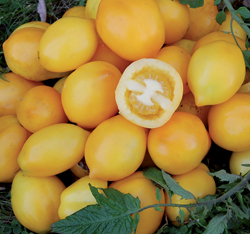 And if you’re one of those unlucky folks who have never had the pleasure of picking a tomato right off the vine and popping it into your mouth, you are missing one of life’s great pleasures. While many varieties of tomato can be very tricky to raise, there are several delicious types of cherry tomato that are easily raised in a pot on your porch, even if you live in an apartment, which will give you fresh tomatoes for several months in the late spring and early summer…and if you plant them again, another several months in the fall. Your local nursery is not necessarily the best source for quality heirloom tomato plants or seeds. Luckily, there is a nonprofit organization called Seed Savers Exchange dedicated to the preservation of heirloom vegetables, and through the cooperation of hundreds of family gardeners and farmers, you can order seeds or plants from them. They literally have thousands of varieties to choose from. And if you are an avid gardener and aren’t yet a member of the Exchange, I’d encourage you to join. They are doing incredible work preserving the diversity of our vegetables, while the commercial farm industry is doing its best to eradicate all but the “shelf life” varieties that produce heavily, transport well, and have absolutely no taste. 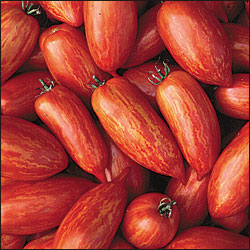 Visit Seed Savers Exchange at http://www.seedsavers.org/. Each year they publish a tomato catalog as thick as a big city phone book that contains all their varieties. (They save more than 25,000 heirloom seeds of a wide range of veggies, fruits, and flowers.) And if you’re lucky enough to live close to their headquarters in Decorah, Iowa, you can attend one of their INCREDIBLE tomato tastings in September, where you can actually experience the dramatic variety within the tomato family.

If you aren’t able or interested in growing your own tomatoes, your next best bet is the Farmer’s Market. But don’t be deceived by year-round Farmer’s Markets! If you see fresh tomatoes in your Farmer’s Market in January, they are probably from South America. They may be “hot house” tomatoes, which are grown in heated greenhouses, but you won’t know until you ask. Which is important, because you should ALWAYS ask about produce at the Farmer’s Market. Some sources estimate that up to 90% of the produce sold in Farmer’s Markets are actually commercially-raised produce from California’s central valleys, which were bought wholesale and are being resold as “local produce” by crafty merchants. Always have a frank conversation with salesman at the Farmer’s Market. Try to ONLY buy produce that was RAISED by the person selling it. Then you know you’re directly benefiting a local farm, and you know that you’re not buying something that was shipped thousands of miles and is being passed off as “fresh, local produce.” Many smart Farmer’s Market co-ops are now developing tough standards, which include farm inspections, to ensure that their food is truly local. 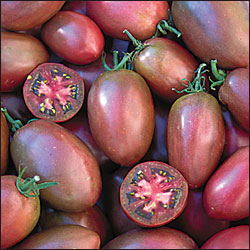 2 responses to “All About Tomatoes”