Greetings from busy Sao Paulo!  (Apologies for spelling it Sao Paolo yesterday…”Paolo” is the Italian spelling, and Christian’s family were Italian immigrants to Brasil.)

I learned that my first email has been bouncing around Brasil, and was even used in an English class, so that puts pressure on me to make certain I’m writing properly.  Still, it’s 130am here and I’ve got so much more to write that you may get a completely incoherent email.

Today’s email may be mostly information about Sao Paulo, so that you can understand it a bit better.  Tomorrow’s email will be more about my personal reaction to the city and to the people I’ve met here, and the insights of my friends here on the city and on Brasil.  But today is all about education!

As much as I adore lists of statistics, when it comes to city populations, there’s just really no way to know which city is the biggest.  Sao Paulo is definitely in the top 4.  They estimate that the legally-defined area of this city has 19 million people in it, according to the census of 2005.  (NYC metro area has about the same population, but the NYC metro area is almost 7000 square miles and extends almost from Philly to Boston, while the Sao Paulo metro area is half that size.)  However, the urban sprawl has made it hard to define exactly what is “Greater Sao Paolo” and the entire region’s urban population (called the Expanded Metropolitan Complex) is 27 million, which makes it the second largest metropolitan region in the world behind Mexico City.

This city is a SEA of skyscrapers.  It’s like no other city I’ve ever been to, and I’ve been to most of the biggies.  It’s not particularly scenic in terms of natural beauty, but it is uniquely intriguing in terms of architecture.  Walking down the street, I saw a neo-classical build smack dab next to a flawless, kitschy Art Deco relic, and a few blocks down was a Tudor mansion.  There are some very striking architectural buildings and a bridge that will blow your mind.

Sao Paulo has been around since the mid 1500s as a Jesuit mission, but it began to grow dramatically in the 1800s as coffee began to be planted and exported.  Slavery was abolished in 1888 (23 years after the U.S.) and then a flood of immigrants from Europe came to Brasil to work in the coffee fields.

When the Great Depression hit, coffee prices fell, and the economy of Brasil tanked.  But then clever entrepreneurs began investing in industrial development, which brought a new wave of immigration, primarily from Italy.  (Today, Italians and their descendents make up the vast majority of Sao Paulo’s residents.)  This is where Christian’s family came from.  His great grandfather had a brick factory and a sock/stocking factory here.  This new prosperity lured farmers from the rural regions of Brasil, and the subsequent flood of rural people coming to the city for work was what gave rise to the “favelas,” or slums, for which Sao Paulo and Rio are famous.

Today Sao Paulo is a mix of extremely poor, a sizeable and growing middle class, and an extremely wealthy upper class.  Crime is rampant here.  All Christian’s family have friends who’ve been robbed and murdered…even last week a close friend of the family was killed in a robbery here.

But, when confronted with such crime, the citizens of Sao Paulo have learned to cope in a clever way.  At Christian’s aunt Vera’s apartment, you enter an outside gate that is unlocked remotely by a guard who recognizes you.  You enter the gate and wait until it closes.  The interior gate is then unlocked, giving you access to the building.  In the event that you happen to be in the presence of kidnapper or robbers who are threatening you to pretend that you are friends with them so the guard isn’t alarmed…as soon as you enter the elevator, you simply push the button to go to the 22nd floor, and the police arrive immediately.  Their elevator is cleverly programmed so that you punch a series of numbers to indicate the floor you want to visit.  You can’t just push “6” to go to the 6th floor.

Statistics show that crime is decreasing in Sao Paolo.  Murders are down 67% since 2000 and are only a fourth of the number of murders anually in Rio.  Sao Paulo is just about to reach the UN’s “acceptable” level for violent crime.  But the residents would probably tell you differently.  Christian’s cousin Floh says the decrease is due to the current mayor, who put a lot of extra police out on the streets.

You’d think, in a city this large and chaotic without a truly saturated and efficient public transit system, that driving would be a nightmare.  And, yes, traffic can be awful here.  But I’ve been very pleasantly surprised about how civil and orderly drivers are here.  It’s not like Paris or Cairo or Thailand where drivers whizz back and forth between lanes, where they cram 5 lanes of traffic into a street that only has the capacity for 2 lanes.  Driving is straightforward, but spiced up a bit with the thousands of motorcycle delivery boys who DO whizz in and out of traffic like they have a death wish.

Still, traffic is gridlocked often enough (a drive across town can easily take 2 hours any time of day) that Sao Paulo has attracted the largest fleet of civilian helicopters in the world.  It’s faster for businessmen to whirl between the tops of the skyscrapers between business meetings and lunches, so the air is constantly filled with the whir of choppers.  One of the city’s chopper companies is run and piloted entirely by women.

Sao Paulo DOES have a subway…one of the best in the world, in fact…but it’s coverage isn’t good enough to make it an efficient way to get around the city.  There are buses, but I’ve seen them and they’re packed…even the triple-length buses, which I’ve never seen in any other city.

We left Vitoria’s apartment in Santos this morning and it took about an hour to drive up the Imigrantes highway, which was even more spectacular than coming down.  The forest is filled with manaca trees that are heavy with purple flowers.  Vitoria sang a song about them…a folk song that the girls love to sing about getting married “underneath the manaca tree on the other side of the mountain.”

Once in Sao Paulo, we stopped to visit Christian’s uncle, Marinho, who I’ve met before in the US.  He’s a professional musician and it was cool to see his studio.  Then we drove with his dog, who he told me to call “Dude” but his name sounds more like “Doo Doo,” to Christian’s aunt Vera’s apartment.  Their housekeeper, who is considered part of the family and has been with them for decades, is an accomplished cook, and she made us a traditional Brazilian lunch.  A salad bursting with heart of palm (one of my favorites!), beans and rice, chopped beef in a spicy gravy, and fried manioc root.  Dessert was a delicate custard, a light cake filled with guava and banana, and big, juicy persimmons the size of your palm.  You spoon out the flesh and it’s sweeter than sugar.

After lunch, Christian’s cousin Floh took us to the big market in the center of the city.  It’s a very poor area, so we took a cab.  The market is housed in one of the grand old buildings from the glory days when coffee made the city rich.  And it was wonderful!  So many cheeses and cured meats…fruits you’ve never heard of, fish fresh from the coast, spices galore…  I can’t bring much of this stuff back to Dallas, but I did get a back of whole nutmeg nuts for $2.  Total bargain.  I also spent $12 at a fruit stand getting some of the most exotic fruits they had.  Some are found only in the Amazon basin.  My favorite was siriguelo.  It’s like half fruit and half berry.  You put it in your mouth and it’s so sweet and tangy it’s like a slap across the face. 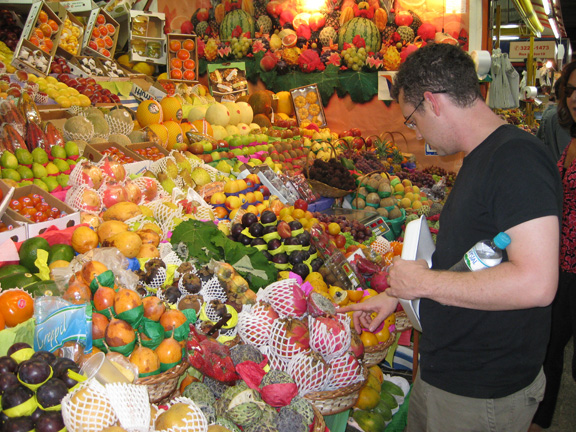 We came back to Vera’s for a rest and Floh made us caipirinhas out of passion fruit and “sweet lemon” which is a type of citrus fruit we don’t have in the states.  It smells just like a lemon, but without any hint of tartness, it’s just lightly sweet.

Floh’s husband Enrico joined us and we went to their favorite pizza restaurant for dinner.  It’s one of the nicer pizza places in Sao Paulo…a pizza is around $20.  (Eating out in sao Paulo is pricey…like Europe.)  We ordered two pizzas, each came half with one combination of toppings, and the other half had another combination.  My favorites were the pizza with no sauce, just cheese, thick slices of tomato, slices of fresh mozarella, and Greek olives…and the roasted eggplant pizza.  We also had a smoked-cheese pizza, but it was a touch too cheesy for me, and a pizza drizzled with pesto made from a bitter herb like parsley.  Perhaps my favorite part of the whole meal was the complimentary bread brought out in the beginning…it was a flaky bread with salami baked into it, and you used it to sop up electric-green olive oil that had been soaking with whole garlic cloves.  AMAZING!

As you can imagine, sleep came pretty quickly afterwards…

A few more interesting tidbits about Sao Paulo before closing.  The record high temperature on record here is only 96F (35C), which is laughably cool by Texas standards.  Still, it’s darn hot and muggy here most of the time.  The record low is 28f (-2C) and it snowed here once in 1918.  Those low temps aren’t common, though.  Uncle Marinho says it does get VERY cold here (in the 40s and 50s F) but since the cold is wet, it’s a harsh cold.  Oh, and apparentely Sao Paulo has one of the best public water systems in the world, but everyone still gasps when I drink from the tap and tells me to get water from the filter.  Sheesh…I have Nutribiotic on my side!

Much more tomorrow, including pictures!