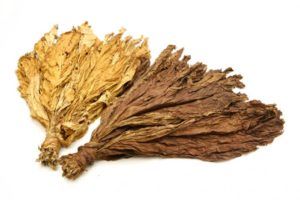 As popular as tobacco is in this world, and has been for centuries, it’s a little strange to me that we don’t cook with it more often.  Granted, I don’t smoke cigarettes (though I’ll enjoy the rare cigar or pipe on special occasions), but tobacco has a wonderful, deep, earthy, hay-like flavor which can be put to extraordinarily creative use in the kitchen.

Now that even broke college students and folks in the lower-middle-class have become sophisticated eaters, I’m starting to see tobacco pop up on restaurant and bar menus on isolated occasions.  (Uchiko in Austin has a lovely tobacco ice cream, though they put so many stabilizers in their ice cream that you can let it sit on the table for 30 minutes and it won’t “melt,”…it just gets warm, but holds its shape.  Creepy!  And Ida Claire in Addison has an exceptional peach tobacco julep on their bar menu.)

One of the reasons you don’t see it on MORE menus is because tobacco is toxic.  Nicotine, the addictive stimulant that people are after when they use tobacco chronically, is one of the deadliest poisons on the planet.  And when you EAT tobacco, you get a much stronger dosage of nicotine than when you SMOKE tobacco.  According to data outdated by more than 50 years, as little as 35 milligrams can kill a 160 pound adult.  (A tablet of ibuprophen normally contains 200 milligrams of medicine, as a size reference.)  Children are even more sensitive: supposedly a 30-pound child would only need to consume 1-2 milligrams of nicotine to be lethally poisoned.   The average cigarette contains about 12 milligrams of nicotine.  And children HAVE been poisoned from consuming even a single cigarette.  (Confirmed reports of actual child death by consuming tobacco aren’t documented anywhere I could find.)

The National Institutes of Health publishes information related to nicotine toxicity, and they state that the formerly-accepted “fatal dose” of nicotine for an adult is 60 milligrams, however, this number is based on “informal” investigations from the 1940s-1960s.  They also state “fatal nicotine intoxications are relatively rare, and there are countless records of subjects who survived consumption of nicotine in amounts far higher than 60 mg.”  The study suggests that our data on lethal nicotine poisonings isn’t well researched, since nicotine rapidly disappears in the blood after death.  (Meaning those who HAVE died from nicotine poisoning probably ingested far, far more than the 60 mg currently stated as a fatal dosage.)  They go on to state “Nicotine is a toxic compound that should be handled with care, but the frequent warnings of potential fatalities caused by ingestion of small amounts of tobacco products or diluted nicotine-containing solutions are unjustified and need to be revised in light of overwhelming data indicating that more than 0.5 g (or 500 milligrams) of oral nicotine is required to kill an adult.”

Tobacco isn’t something to approach, as an ingredient, with wild abandon.  Yet many of the ingredients we cook with regularly, from water to salt to alcohol to nutmeg to chocolate to coffee, are also lethal in the right dosage.  So rather than be too terrified to use it, let’s be SMART about using it, like we do with the other toxic things we enjoy consuming!

When feeding adults, it’s actually kinda hard to cram enough nicotine into a dish to make someone sick or worse.  The previously mentioned NIH study from 2012 discussed nicotine content for cigarettes and pipe tobacco, and found the nicotine content in pipe tobacco ranged between 3% and 5%.   And they were extracting using pure methanol and intensive agitation with tobacco that had been ground to a fine powder.  You’re not likely to get that kind of extraction, especially if your solvent is milk or sugar syrup or 40% ethanol (ie, vodka).  (Though dissolving into liquor WILL be much more efficient.)  They found an average of 38 milligrams of nicotine per gram of tobacco.

Tobacco is sold by the ounce here in the US, and an ounce contains 28.3 grams.  At 38 milligrams of nicotine per gram of tobacco, a full ounce of tobacco will contain an average of about 1 gram of nicotine.  (Enough to kill 2 adults, according to the NIH’s new advice.)  One ounce of tobacco is a LOT of tobacco.  At a recent FRANK dinner, I used 1 ounce of organic pipe tobacco (thus 1 gram of nicotine, if I extracted it fully, which I couldn’t have done) to produce 100 servings of ice cream.  This means each diner ate “10 milligrams” of nicotine.  (In reality, much less due to imperfect extraction.)  The NIH says the average cigarette yields 2 mg of nicotine into the body when smoked, so our ice cream was theoretically the nicotine equivalent of smoking 5 cigarettes.  (Less all the tar and chemicals that come from combustion, of course!)   A diner would have had to eat more than 50 servings (over 3 gallons) in order to get a 0.5 gram dose, which the NIH says is REALLY the lethal dose. 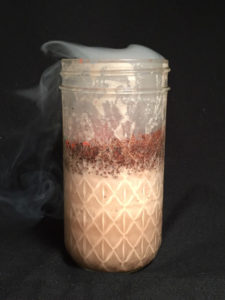 A smoked milkshake made from tobacco chocolate ice cream, laced with bourbon for my restaurant FRANK. We sealed apple wood smoke in the mason jar just before serving.

Also, at a theoretical 10 milligrams of nicotine per serving, the ice cream definitely was a mouth-tingler.  A lower amount of tobacco would still infuse flavor into the ice cream base, without causing the tingle.  (We specifically chose to use that amount since we were modeling the dish after a song called “Cigarettes and Chocolate Milk” so that first-time or occasional tobacco users would get that first-time tingly buzz, and regular users would definitely realize they were eating tobacco.)

Also, all of this is, of course, assuming near-perfect extraction rates.  We didn’t grind up our tobacco, or use pure methanol to extract it.  We used milk.  But it’s better to be careful with your calculations rather than cavalier!  Assume you will achieve complete and total nicotine extraction…which, of course, you will not.

Ultimately, there’s a lot of misinformation floating around the net regarding how lethal tobacco and nicotine are when consumed orally, and it would be VERY challenging for you to inadvertently eat enough nicotine to kill you.  (Though it’s certainly easier for children, so it’s best to not feed tobacco-infused foods to kids.)  Approach tobacco infusions with a measure of caution, but realize that you’d have to perfectly extract half an ounce of tobacco and serve that entire amount to an adult to endanger their life.  (I don’t even want to think about what that would taste like!  We served half an ounce to 50 people and the flavor and tingle were bold.)

Knowing that 500 mg poses a lethal threat, and that 10 mg can cause a fairly strong mouth tingle, aim to keep your dosage per-person at or under 25 mg per person, which is well within the safe range.  Because we use ounces in the US, you’ll need to do some math when developing your recipe.

HERE is my recipe for tobacco chocolate ice cream that you can use as a baseline for expanding your use of tobacco in the kitchen.  Don’t forget that tobacco can also be extracted into both alcohol and sugar syrups, as well, and can also be used as an aromatic smoke.  Flavor will extract differently based on the solvent you use, and honestly it’s not really the nicotine you’re after…it’s the flavor of the tobacco.  So dissolving in milk or a sugar syrup, rather than alcohol, will yield LESS nicotine, and therefore you can get MORE flavor on the palate without as much of the tingle.  (Though the tingle is nice!)  Just make sure you’re always working with organic pipe tobacco, and go to a reputable shop so you can smell the many different varieties on offer.  Some are flavored, which you’ll want to avoid, but different fermentation processes and toasting temperatures produce a dramatic variety of aromas in the tobacco, from fresh hay to intense smoke.

I hope this post helps clear up some myths about the ingestion of tobacco, and empowers you with enough authorized and researched information to boldly venture into the relatively unexplored realm of tobacco in the kitchen.

This entry was posted in Blog, FRANK. Bookmark the permalink.

2 responses to “Cooking with Tobacco”