WRONG!  I’ve developed a recipe for a lard-based pastry crust that takes 5 minutes start-to-finish, requires no chilling time, and even a kid can master it the very first time.  Sound too good to be true?  Read on…

Lard got a bad rap somewhere along the line.  Even the majority of “foodies” tend to turn their nose up at lard, almost as if it’s as bad as high fructose corn syrup or hydrogenated trans fats.  To be honest, lard is actually BETTER for you that butter.  Check it out: 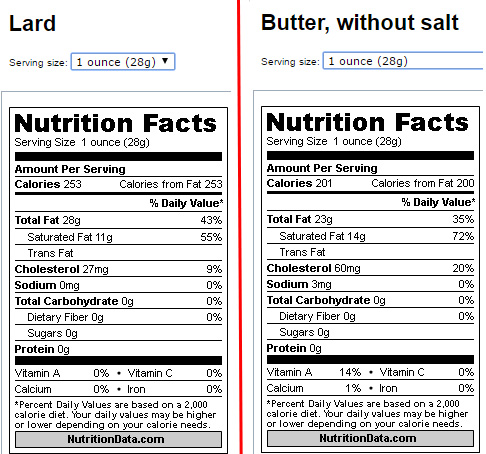 Lard has LESS saturated fat and LESS cholesterol than butter, ounce for ounce.

This chart shows that, ounce for ounce, lard DOES have more fat and calories than butter…HOWEVER, in an ounce of lard, there are 3 grams LESS of saturated fat, and half the cholesterol of butter.  And those are typically the 2 things your doctor would like you to decrease in your diet.

This chart does not break down the healthy fats, for some reason.  The fact that lard has MORE fat, ounce for ounce, than butter is actually a very good thing.  Lard is 60% monounsaturated fat…the GOOD fat that your doctor wants you to eat more of because it actually lowers your bad cholesterol count.  (Butter, on the other hand, is only 45% monounsaturated fat.)

Also, lard has a pretty high smoke point…375F…much higher than butter.  Meaning you can sear or fry in it, whereas you can’t with butter without burning it.

So let’s permanently put aside this irrational fear we have of lard, and embrace it as a superior cooking fat.  I’m not saying to replace your healthy olive oil with lard.  But on special occasions, lard will deliver a superior product to butter, and still be a bit healthier for you!

Now…where the heck do you get it? 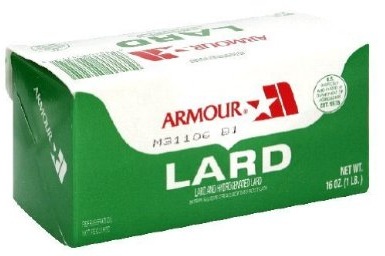 Gross! Do not EVER buy lard from the grocery store. It’s poison.

NOT the supermarket.  Granted, you’ll find this box of lard on the baking aisle next to the Crisco in virtually every supermarket in the country.  But don’t you DARE touch that stuff.  First of all, real fresh lard is liquid or semi-solid at room temperature.  The stuff inside this box is as solid as shortening.  Because it’s been hydrogenated.  The process of hydrogenation is hard to explain to everyone but a scientist, but it means altering the fat at the molecular level to artificially change the bonds that make an unsaturated fat into a partially saturated fat, so it will be solid at room temp.  This process creates trans-fats, which do not exist in nature, and which are solidly linked to heart disease.  (ie, they will, absolutely, kill you over time.)

In addition, commercially produced lards contain BHA (butylated hydroxyanisole…I can’t pronounce it either) to prevent them from going rancid as they sit on the shelf for months.  BHA is suspected to be a human carcinogen by the National Institutes of Health.

“So what, Ben Starr, do you propose we do?  Go out and raise a pig and then put it into a big pot to render out the lard?” 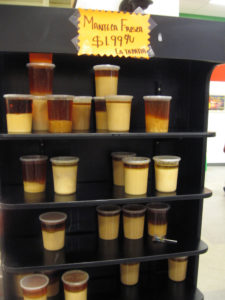 Real, freshly-rendered lard is actually pretty easy (and cheap…$2-$3/lb) to find all over the US, though that wasn’t the case a decade or two ago.  Your local Latin American market has been rendering lard to make chicharones (ie “pork rinds”) since the day they opened, and they sell it right there next to the chicharones in quart-size deli cups.  It will be in the deli section where they sell pre-prepared foods like tamales and carnitas.  Ask for “manteca fresca” if you can’t find it.  This lard is freshly-rendered and may be entirely liquid, or a soupy solid, depending on the pig’s diet, the ambient temperature of the store, etc.  Because it’s fresh, it’s subject to going rancid (like ANY fat or vegetable oil), so keep it in your fridge and use it as quickly as you can.  Light and oxygen are its enemies.  This fresh lard has a mild “porky” flavor to it.  Certainly, for savory crusts like for quiches or meat pies, there’s just nothing better.  (Except for bacon fat…read on.)   An apple pie with a fresh lard crust is to die for.  However, a delicate lemon cream pie might not agree as well with a fresh lard crust.

The same goes for bacon fat, which is just the lard that renders out when you cook bacon.  NEVER throw away bacon fat.  Always save it, and keep it in your fridge.  This is free lard.  There’s NO difference in its cooking properties, only it its flavor.  Bacon fat tastes like…well…bacon!  It’s smokey, a little sweet, and salty.  And it makes a divine pastry crust.  Just remember to reduce the salt content in the recipe below by half, and remember that the crust will taste faintly of bacon, which is a fabulous thing for quiche crusts, pot pies, and meat pies, and even for things like apple, chocolate, and peach pie…but maybe not so good for other pies.  (You be the judge based on how much you adore bacon.) 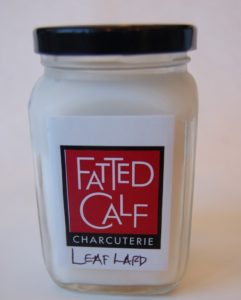 There’s another type of lard that is highly coveted by pastry chefs, and it’s called “leaf lard.”  It’s rendered from the fat around the kidneys, which is pure and white and fully solid at room temperature…but with a soft-delicate texture, just a bit sturdier than room temp butter.  It is flavorless, and any pastry chef on the planet will tell you that there’s simply no better fat for making everything from sweet pastries to croissants.  It beats out butter every single time.  You’ll find leaf lard at gourmet and specialty markets, or you can order it online everywhere from Etsy to Amazon.  Expect to pay anywhere from $6/lb to over $30/lb depending on the source and the farm that raised it.  If you want leaf lard from Berkshire pigs raised in a pasture and fed only walnuts, flowers, and beer…you can find it, but you’ll pay for it.  I’ve only bought leaf lard a few times in my life.  If I need a pastry with a delicately flavored crust and the flavor of fresh lard just won’t do, I just use butter.

(You CAN render your own leaf lard…the hardest part is finding pork kidney fat.  A specialty butcher or meat supplier can get it for you.  Cut up the fat into small pieces, put it in a pot with half a cup of water over medium low heat, and heat it gently for 2-3 hours, strain out the solids through cheesecloth or a fine mesh strainer, then chill it until the lard has solidified on top of any remaining water.  Scoop it off.  Gregory, I expect a report, soon…)

Congrats to those of you who waded through that 1000-word rant on the wonders of lard.  I shall reward you with a recipe you’ll have memorized by the second or third time you use it, and you’ll use it often, it’s so easy.  Plus, it contains only a fraction of the amount of butter called for in an equivalent butter-based pastry crust, meaning far less overall stuff that’s bad for you.

You’ll note that this recipe is in weights (ounces) rather than volume (cups.)  If you’re REALLY after fast and easy baking with fewer dishes to wash, get yourself a kitchen scale.  You’ll thank me.

You’ll also notice (strangely) that the lard called for in this recipe is liquid.  Trust me on this one.  Microwave your lard for a few seconds until it’s liquid, or place the lard container in a bowl of hot water until you can pour it.

You’ll also notice this recipe calls for buttermilk (also highly unusual for pastry crusts), but if you follow me, you know how obsessed I am with buttermilk.  It’s indispensable in this recipe, and there are no substitutes for it…other than perhaps sour cream or yogurt diluted with a little milk.  If you don’t have buttermilk in your fridge, sit down and read that link above.  NOTHING in your life is as important at this moment as educating yourself about buttermilk, I don’t care how fast you need to get this pie baked.  Then go to the store and buy yourself some.  Your friends and family will forgive you the lost hour, because your cooking will be that much better moving forward.

Stir around with your fingers to mix.  Make a well in the center of the flour and add:

3.5 oz liquid fresh lard (scant half-cup)
4 oz buttermilk (1/2 cup)  NO SUBSTITUTIONS.  If you don’t have buttermilk in your fridge, shame on you.

SAVORY LARD PASTRY CRUST  (yields 1 single crust for a pie, or 3-6 hand pies depending on size)

Honestly, the garlic/onion/herbs are optional, but it will blow your mind and palate if you add them, in addition to making the crust strikingly beautiful.  Stir around with your fingers to mix.  Make a well in the center of the flour and add:

3.5 oz liquid fresh lard (scant half-cup)
4 oz buttermilk (1/2 cup)  NO SUBSTITUTIONS.  If you don’t have buttermilk in your fridge, shame on you.