Posted on July 2, 2012 | Comments Off on MasterChef: Surf ‘n’ Turf and Childhood Faves

Fresh off a group win normally means that a member from the LOSING team gets eliminated, and the winning team is safe from taking that hit.  However, due to exceptional soufflés created by Christian, Jennifer, Adrien, and Derrick last night, the judges couldn’t decide WHO to send home, and decided to send no one.

So when we walk into the MasterChef kitchen today, we are each harboring this gnawing fear that there’s going to be a DOUBLE elimination.  Meaning, our group win didn’t actually garner us the normal victory spoils.  That’s a bummer.

Mystery box!  Normally I hate these, but last week with the scallops and bananas, I hit it outta the park and ALMOST won.  So I have to keep up that momentum.

We lift the box to discover a truly stupendous collection of meat, some of which is alive and crawling all over the place.  The theme is obviously surf and turf, and I have to quickly snatch a crawfish that is heading for the hills and about to fall off my counter.

I realize that, at this point in the competition, my biggest weakness is my presentation.  The food I cook tastes great (usually) but it doesn’t LOOK like someone would pay $15 for it in a restaurant.  So before I even decide WHAT to cook, I start envisioning what it’s going to look like on my plate.

I end up deciding to use the bison ribeye (what Texan would pass THAT up?) and the crawfish.  And lucky for us, we actually have a pantry to use for this mystery box…we’re not relegated to a handful of ingredients under the box.  Sweet!  But then we’ve only got 45 minutes to pull it off, which makes it tricky.

First I boil the crawfish for a few minutes in heavily seasoned water, and then I peel them and take out the tails.  Then I sauté the crawfish shells with the jumbo prawns and crab claws, then I add shellfish stock and veggies and simmer it for a bit, then reduce the heck out of it until I have an intensely flavored seafood sauce.  This sauce gets “painted” in a streak across my plate.  Then the crawfish tails get tossed in the robust sauce and heaped in a little pile at one end of the plate.

I season the bison ribeye generously with cayenne, garlic, pepper, and salt and let it sit until the very last minute.  Then I sear it, medium rare, on cast iron, let it rest briefly, then slice it and drape the perfectly cooked slices in a fan shape on top of the crawfish.  And at the far end of the streak of sauce running across the plate, I lay some white asparagus tips lightly sautéed in butter.

For the first time in this competition, my plate looks like it came from a restaurant.  And I’ve tasted everything and know it tastes great.  I’m REALLY hoping I’m gonna pull off a mystery box win.

But my fellow competitors also had great luck.  (How can you NOT turn out extraordinary food with such ingredients?!)  And the top 3 tonight are Suzy, Adrien, and Jennifer.  Christian is not too happy about not being in the top 3.  Surf and turf is his specialty.  And Gordon heaps fuel on the fire by making him come to the front to taste Jennifer’s dish and they get into a yelling match.  I’m feeling REALLY uncomfortable right about now.

They name Jennifer the winner, which is not a surprise because she’s already won 2 mystery boxes so far.  That girl is GREAT at conceptualizing a menu based on limited ingredients.  She disappears into the pantry with the judges, and when she comes out, we learn that the theme for the elimination challenge is “childhood favorites.”  The JUDGES’ childhood favorites, to be exact.

Joe’s childhood fave is pizza, understandably.  Graham’s is mac n’ cheese.  Both of those are among my personal favorites, both as a kid and as an adult.  But Gordon’s is grilled cheese and tomato soup.  Blah.  Thinking about grilled cheese makes me think of thin, tasteless white bread and pasteurized process cheese slices that come individually wrapped in plastic (and the “cheese” tears as you open it up…and tastes nothing like cheese).  And I’ve never been a fan of tomato soup.  I find it boring.  Perhaps if you dress it up with basil and cream, or roasted poblano peppers and corn…THEN you’ll get my tastebuds perking.  But I have to admit, I’m hoping it’s either pizza or cheesy mac.

And Jennifer reveals that she chose Gordon’s favorite.  Grilled cheese and tomato soup.  And our task is to “dress it up” and make it appeal to an adult’s palate. 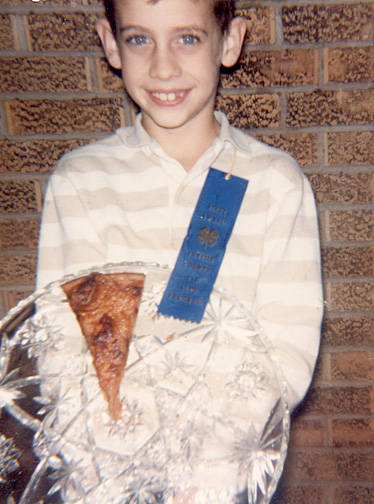 We dash to the pantry and when we return, there are photos of each of us as children sitting on our stations.  My picture is me holding a pizza I made for a cooking competition when I was like 8 years old.  That pizza won first place in the contest, by the way!  Shame we weren’t making pizza today.  It’s funny to stare at that photo of that little 8yo boy.  Could he possibly have imagined that one day he’d be cooking on network television for some of the world’s greatest chefs and restaurateurs?  No way.

I’m wondering how I can pull off a tomato soup in 45 minutes.  Not an easy task.  To get really good flavor from fresh tomatoes, you have to roast them long and slow to concentrate the sugars.  That’s what makes a soup complex and wonderful.  And I don’t have time for that.  But I start anyway, by peeling and seeding the tomatoes, cutting them up fairly fine, tossing them with olive oil, salt and pepper, and get them into a 400F oven to begin roasting down.  After that I puree them with vegetable and chicken broth, add some fresh herbs, a dash of sherry vinegar for brightness and let it simmer very gently.

For my sandwich, I first cook some bacon very slowly until it’s crisp.  Then I caramelize some red onions in the bacon fat.  This will be my secret weapon to elevate the grilled cheese.  And I pick a combo of Gruyere for its pungent flavors, and Fontina, because it melts so beautifully.  I griddle sourdough bread in garlic butter, then I lay out the bacon and the Gruyere and broil that until it’s melty.  Time is starting to run out, so I lay the Fontina on top of the Gruyere and get that under the broiler, and I’m aiming for a nice brown crust on the cheese.  Nothing I like more than toasty cheese!

I give a quick taste to my soup as I plate it…it has tasted great up to this point…but something has gone horribly, terribly wrong.  It tastes like the inside of an aluminum can that someone has been dumping cigarette ash into.  I nearly gag when I taste it.  It is, quite simply, the most disgusting thing I’ve ever made.  And I have NO idea how it happened.  Could my pan have reacted with the tomato acid?  Did someone sneak a cigarette wrapped in aluminum foil into my blender?

With less than a minute left, there’s no time to fix it.  I drizzle in some cream and fennel fronds to try to make it look okay.  And my grilled cheese has to come out of the oven, even though it’s not fully toasted yet.  I nestle some caramelized onions on top.  It looks great, though I wish there was some brown crust on the cheese.  But that soup…  Man, it is NASTY.

On the walk up to the judges’ table, I seriously consider staging a fall and dropping it, just so the judges don’t have to taste it.  I’m totally convinced I’m going to go home either way.  But before I know it, I’m setting the dish down in front of them, and just like I did with the beans, I confess.

“Chef, my soup is nasty.  I have no idea why.  But if you eat it WITH the sandwich, it’ll actually kinda work because it balances out the richness of…”

Ramsay calls my bluff and tells me I’d be a great politician.

“My initials aren’t B.S. for nothing, Chef!” I respond.  He is not amused.

One by one, the judges taste my soup and cringe.  And they say it’s so bad, it doesn’t matter HOW GOOD my grilled cheese is, so they don’t even bother tasting it.  That’s bad news.

Derrick, Christine, and I land in the bottom 3.  I deserve to be there.  My performance was terrible.  But for some reason, they send me back to my station.  They were as puzzled as I was about how I could have pulled off something that tasted so disgusting.  Maybe they figured there was an equipment malfunction.  I’m just not sure how you can turn fresh tomatoes into something that tastes like a burnt-out Dr. Pepper can.

They send Christine home, but with kind words.  She has really made an impression on them.  Christine and I were very close on the show.  I know she’s disappointed to leave, but she has a 2yo at home who is eagerly awaiting his mama’s return from Hollywood.

That leaves Derrick standing up there.  And they announce that they’re not finished.  They’re going to eliminate him TOO!

This comes as a big shock.  While Derrick may not be the loudest, meanest, or nicest person on the show, he is one of the most talented.  He has brilliant vision, and he SERIOUSLY wants to become a chef.  Seeing him go hurts really bad, because deep down inside, I know he’s a much better cook than I am.

But there’s a reason they decided to let me stay.  And Derrick and Christine will be counting on me to make the most of this opportunity.  So I gotta keep my head in the game and don’t let ANYTHING like this happen again…