Posted on March 23, 2012 | Comments Off on MasterChef: Veggies and Catfish

The only difference between de-ja-vu and mys-te-ry-box is that one of them has 4 syllables. I am sick of mystery boxes. I hate them. My only consolation is that you can’t be eliminated on a mystery box.

I lift today’s mystery box and underneath is a treasure trove of veggies. I may be a Texan at heart, which means I could never be vegetarian, but I love me some vegetables. I have a huge organic garden in my back yard, and in the armpit of summer, like now, I might as well be vegetarian with all the fresh producing coming out of the back yard. This is actually the first mystery box I think I’ll enjoy. 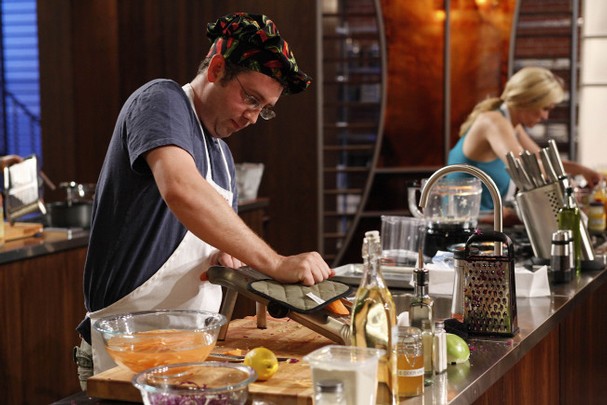 But previous mystery boxes have been so traumatic for me that I heed some advice the judges have given in the past… “If you’re not immediately convicted about what to cook, start several things, and then see which ones turn out well.”

So I start two dishes. The first is a pairing of a creamy beet and potato soup with a mushroom and goat cheese tart. The second is a curried green tomato and eggplant ratatouille. And since we’ve got an hour, I’m actually able to finish both meals completely. But then I overhear the judges saying, “I’m worried about Ben Starr, he’s cooking 3 different dishes and I don’t think he’s feeling very confident.”

So much for following the judges’ advice!

After tasting my dishes, I really believe the curried ratatouille is the best. I love ratatouille. I make it all the time in the summer when I’ve got eggplant, zucchini, and tomatoes coming out of my ears from the garden. The green tomatoes are giving it a really nice tang that balances out the sturdy flavors of curry. I’m proud of my dish and I’m hoping it will actually be in the top 3 today.

It’s not, but it’s also not the worst of the day! That honor goes to Christian, which takes us ALL by surprise. Christian cooks like a veteran chef every single time. There is no denying his talent and expertise. So we’re all shell-shocked by Ramsay’s condemnation. And, true to his spirit of independence and candidness, he vocally disagrees with the judges’ opinions.

In the top 3 this time are Adrien (NO surprise), Alejandra (NO surprise), and Jen Behm. Pleasant surprise! Jennie cooks next to me on the same station, and I just love cooking next to her. She has a great energy and is bursting with creativity. And her dish looks really yummy. The judges give the winning position to her (yay!) and she heads back into the pantry to decide our collective fate for the next round.

Little do we know, she’s back there cavorting with Whitney Miller, the winner of last season’s MasterChef! I really like Whitney. Reality TV is littered with people who can seem phony or one-dimensional. Whitney is like a breath of fresh air…so real, genuine…so much like the rest of us. She has just published a cookbook, and Jen’s job is to pick one of 3 dishes from her cookbook for the rest of us to replicate, based only on looking and tasting. No recipe.

When Whitney comes out on stage, I shed a few tears. And I also have an epiphany. All of my fellow competitors live in a different world than I do. I don’t regularly dine on “gourmet cuisine.” I can probably count on two hands the number of times in my life that I’ve eaten food that could even be called “cuisine.” I may have been to all 7 continents, but when I travel, I eat the same “category” of food I eat and cook when I’m home in the U.S. Humble food. Farm house food. Street food. The Food of the People. Certainly not the Food of the Privileged.

Yet here I am, struggling to try to cook “sophisticated, well-conceptualized cuisine” (thank you, Joe Bastianich) and failing miserably at almost every turn. This is NOT the kind of cook I am.

Seeing Whitney up there in her MasterChef outfit, knowing that last season she beat many incredible talented “gourmet chefs” with her humble Southern comfort food does something to me. From this point on, I’m going to cook BEN STARR FOOD. And if they don’t like it, they can send me home!

Thankfully, Jen has chosen fried catfish with slaw, tartar sauce, and sweet potato fries. Could there be a more BEN STARR MENU? Methinks not. For the first time in this contest, I feel totally confident.

And it works. All around me, people are struggling with the catfish. Heck, this was probably the FIRST fish I ever ate, and collectively I’ve probably eaten more catfish in my life than all the ocean fish combined. I LOVE CATFISH. I grab a cast iron skillet…(what ELSE could you possibly cook catfish in?)…and an hour later I’ve got an almost exact replica of Whitney’s dish.

I proudly walk to the judges’ podium and present my plate. Ramsay looks at me, looks at my plate, and squints his eyes.

“Have you got Whitney Miller hiding under that ridiculous hat of yours?” he asks. And at that moment I know that I’ve perfectly replicated at least the appearance of Whitney’s dish.

“The fish is perfect. In fact, it might even be better than Christian’s.”

What??? Christian is the strongest competitor here. And his ultimate strength is fish! He lives a block from the ocean. He cooks fish every single day. My fish might even be better than his?

This is big. Now I feel like I have a reason to be in this competition. I might even have a chance of winning. As long as I can keep the focus on my kinda food.

But the challenge is not over. Adrien and Alejandra are down front for the worst dishes of the day. Bizarre, because they were just up there an hour ago for the best of the mystery boxes. Standing with them is Jennie Kelley. My fellow Dallas competitor. One of my closest friends in the competition. Jennie is a peacemaker, like me. She spreads love and joy and encouragement to everyone else.

And they take her apron and send her home. 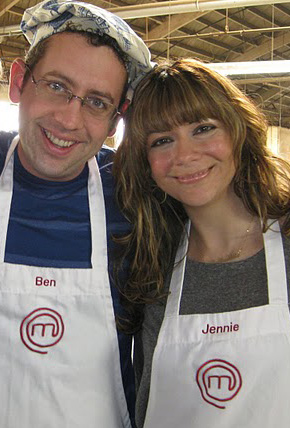 Winning is no joy when you win at the expense of people you love. Losing Jenny is as hard as losing Alvin. Maybe harder. She has incredible talent that I don’t believe has been fully shown to the judges. She is a kindred spirit. Someone who gives of herself constantly and consistently. I would describe her as the heart and soul of our group. A musician, artist, free spirit. An angel, really. My joy at winning is instantly overshadowed by sorrow at knowing she won’t be here tomorrow. This is a tough blow.

But it’s a competition. And now I’m going to be a team leader up against the person who most of us view as the strongest chef here. I have my work cut out for me. I need a brilliant team…