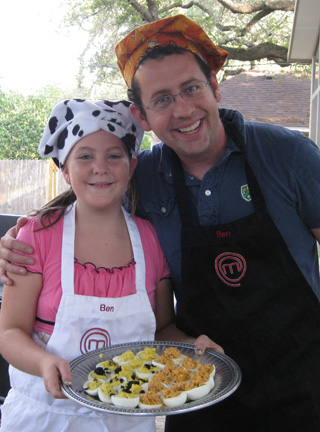 This is Maggie.  Maggie’s mom emailed me during the run of MasterChef and said to me, “You have stolen my child’s heart” and proceeded to explain that her daughter started taking cooking classes at age 3 and was an aspiring chef.

I emailed them back, and Maggie herself responded thusly: “I did my science fair project on molecular gastronomy. I think I would be able to use some of those techniques to elevate food and nutrition in developing countries. Because lets face it even if bowl of mush  gets the job done it can be very demoralizing.”

She proceeded to invite me to dine with her family if I was ever in their area.  And, coincidentally, last weekend I was.

Through our correspondence I had learned that Maggie was strikingly articulate.  I figured perhaps she might have some assistance in writing her emails from her parents.  But the moment she opened the door and introduced me to her parents, I realized I was dealing with an extraordinarily gifted, intelligent young person.

Maggie escorted me to her back yard where she said, “I wasn’t sure what your favorite beers were, so I selected a variety based on what I thought you would like.  I know you want to move to Hawaii so I picked this beer from the Kona Brewing Company…”

(I’ve been to the Kona Brewing Company many times and love their beers.)

“…I also know that you like local foods, so this one is from a brewery here in Austin…” 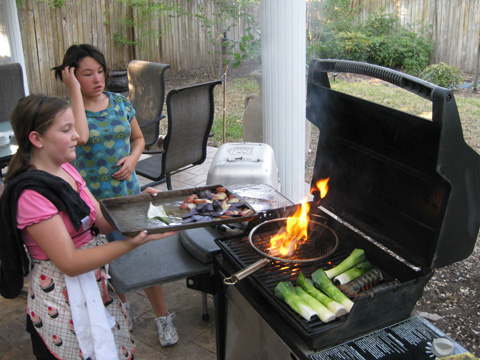 And she went on to narrate exactly why she selected the half-dozen beers in the cooler.  While I was still reeling, she disappeared into the kitchen and retrieved a tray of deviled eggs.

“Some of these are plain, some of them are with smoked salmon, and some are topped with caviar.  And since I know you like local foods, these eggs came from my friend’s farm just down the road.  I invited her and her husband to dinner tonight so you can talk to them.”

Still not quite believing that this girl was 11, I popped a smoked salmon deviled egg into my mouth and chewed thoughtfully.  (Delicious, by the way!)

Maggie dashed back into the kitchen to retrieve a tray of lobster tails, leeks, and Peruvian purple potatoes and she fired up the grill while her mom, Julie, chatted me up.

“I hope you don’t think that Maggie actually drinks alcohol because she knows so much about beer.  She’s actually never tasted it, she just knows a lot about it because it relates to food.  Whenever we go to the wine store, she loves to give advice to people who look perplexed about what to buy, and it always catches them off guard.” 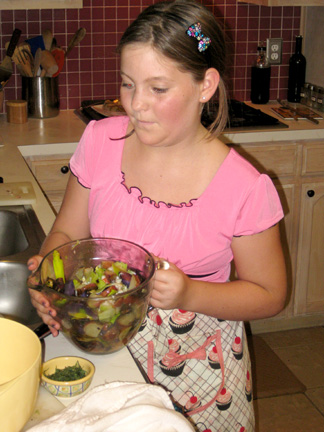 I don’t think I had said anything articulate thus far, I was so completely surprised by Maggie.

“She’s one of a kind, that’s for sure,” her mom continued.  “When she was enrolled in preschool, early on her teachers were worried that she might be developmentally delayed because they watched her playing with a toy knife in the play kitchen, and she was using the flat part of the knife instead of the blade.  They didn’t think she understood what a knife was for.  Then she explained to them that she was smashing and peeling garlic, and that shut them up pretty quickly.  Maggie, sweetie, tell him about your cookbook!”

“I wrote a cookbook and we had almost come to an agreement with a publisher on it, but the profit margin wasn’t good enough for me.  I’m donating all the profits to Africa.  I found these inexpensive, energy efficient ovens that don’t put people in danger of carbon monoxide poisoning, and I want to send over as many of those as possible.  But the profit wasn’t good enough with this publisher, so we’re looking for another one.” 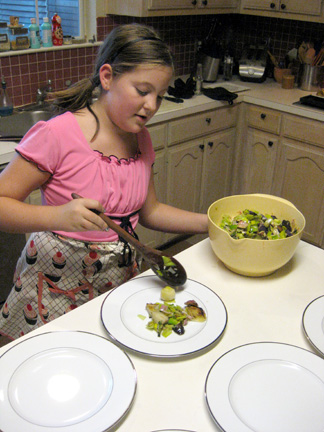 Maggie had finished grilling the lobster and veggies and we moved into the kitchen so she could pair this emerging “lobster salad” with the fish course, cod wrapped in potatoes and sauteed in duck fat.

You had me at duck fat, Maggie.

As she tossed together the grilled lobster and leeks, she began adding red wine vinegar.

“Sometimes my parents tell me that I go too heavy on the red wine vinegar, but it’s one of my favorite ingredients and I personally don’t think you can use too much of it.” 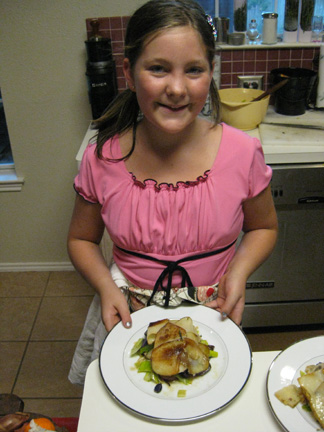 “I agree with you there, Maggie!”

She shuffled us into the dining room, where she had painstakingly prepped a formal table, complete with snappy name-cards that her sister had designed.  Her sister promptly informed me that she only buys her clothes at second-hand stores because she doesn’t want to burden the economy with extra manufacturing, and it’s also a great way to recycle.  I informed her that I, too, purchase virtually all my clothes at thrift stores, and proceeded to wonder about the genetic line of this family and how they might be related to Einstein. 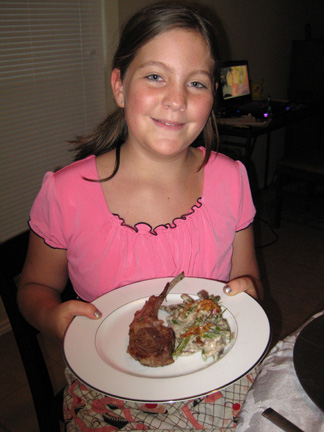 Maggie got us all seated, described our first course, as well as the wine she had chosen to pair with it.  Then she poured herself, her sister, and their best friend glasses full of juice, and we all sat down to a DELICIOUS fish course…the potatoes perfectly crisp from the duck fat, and the tangy lobster salad that had a hint of vanilla from a bean that was tossed with the red wine vinegar.

Scarcely had I finished the first course when Maggie delivered the main: a rosemary braised lamb chop with green bean casserole as the side.

“The casserole is for my sister, who doesn’t eat red meat,” Maggie said.  “But don’t worry, nothing is from a can.  The green beans were fresh and my mom and I spent hours breaking off the ends, and then I made the sauce with cream and fresh mushrooms.”

Of course she did.  I recalled her mom saying that she tried to start cooking a 3am but they forced her to sleep until 7. 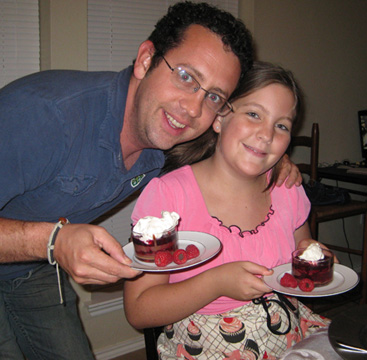 Dessert was a chocolate mousse thickened with carrageenan, an extract from red seaweed that is a popular ingredient in molecular gastronomy for its incredible thickening power.  Layered between the mousse was a puree of fresh raspberries and blueberries, and Maggie had placed chocolate-stuffed raspberries on the side for garnish.

Coming on the heels of my almost 6000 mile road trip, my brain was already mush.  But the surreal experience of eating this superb dinner cooked by an 11-year old who’s already more articulate and insightful than many college grads I know…it just overwhelmed me.

I gave one of my treasured MasterChef aprons to Maggie, along with the fuzzy cow hat that I wore on the show during the challenge when we cooked for kids.  It almost seemed silly remembering those chicken nugget sandwiches and corn fritters we cooked for kids the same age as this budding young chef who had just paired lobster and vanilla, delivered a perfect medium-rare lamb chop, and given me one of my first tastes of culinary gastronomy. 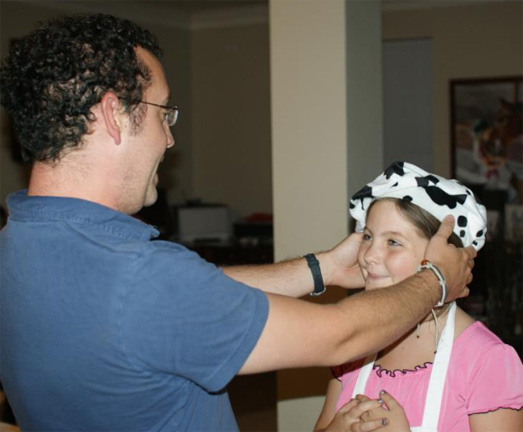 With tears in my eyes, I told Maggie that our country has many established paths to success, but that she should follow her heart and her passion and not buy into anyone’s rules about what it means to be successful.  She’s already light years ahead of the place most of us were when we were 11, but I myself know what it’s like to be young and have everyone around you expect “great things.”  It can send you into decades of avoiding doing ANYTHING because you’re scared of how to properly live up to everyone else’s expectations of you.

Meeting Maggie and her family was an event that I will never forget.  I hope I’m given the opportunity to work with Maggie in the future, perhaps on TV, so we can share her infectious wit and passion for food with the world.  And if you would like to help Maggie in her efforts to bring better, healthier food to Africa, please drop me a note so I can put you in contact with her.

Maggie, you have inspired me in a way that no one else has.  Never stop cooking.  Never lose your curiosity about life and food.  And never let ANYONE tell you that there’s only one way to do anything, whether it’s in the kitchen or out.  I can’t wait to see what impact you have on the world!  In your 11 short years on Earth so far, I know you’ve already impacted many people.

This entry was posted in Blog and tagged Culley, Girl of the World Catering, Maggie, MasterChef, superfan. Bookmark the permalink.

One response to “Meet Maggie!”