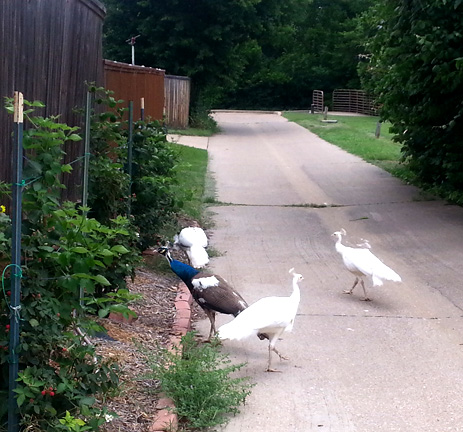 This afternoon I walked out onto my driveway to discover an urban farmer’s worst nightmare…a gang of street peacocks feasting on my blackberries!  These 4 ladies (technically “peahens” because all “peacocks” are male, and the non-gender-specific word for them is “peafowl”) obviously belonged to someone.  It’s not every day you see 4 gorgeous, well-cared-for peahens wandering the streets.  But they were hungry, and were going after my just-ripening blackberries like mad!

They had successfully devoured almost half my crop before I finally managed to shoo them off, and they kept sneaking bites as they walked further down the alley, the rascals!  I knew that their owner, wherever (s)he was, would be missing them, so I gently tried to herd them into neighbor Sharon’s garage.  They would have none of it, and instead flew up on her fence: 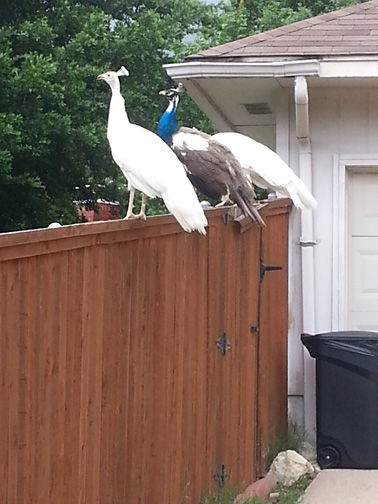 You can imagine her surprise when I called her and told her to walk quietly into her backyard and look up on the fence!  But Sharon’s bird dog, Sasha, was about to go absolutely nuts seeing those dinosaur birds up on the fence, so the peahens decided to get a bit higher and flew up onto her roof! 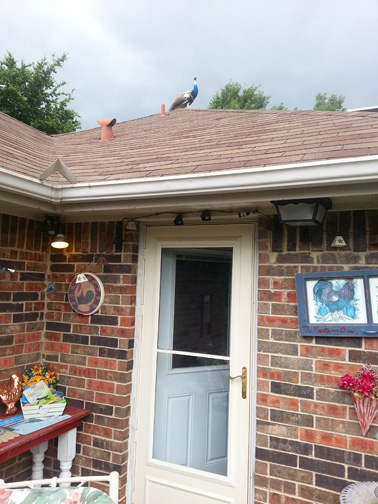 By this time, we had called Animal Control to let them know where the peacocks were, and they had either been reported as missing, or reported as wandering, because the operator knew exactly what I was talking about.  Still, an hour after giving them the exact address, animal control was nowhere to be found, and a storm was brewing.  That didn’t stop these crazy ladies from getting as high up as they possibly could: 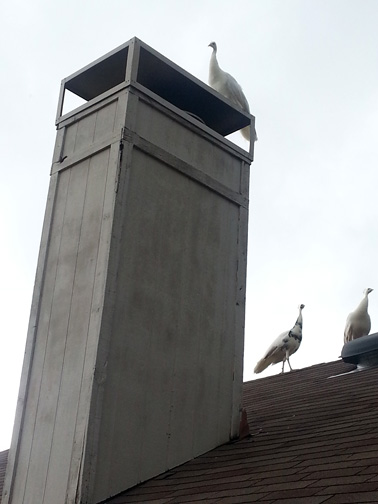 Eventually they flew onto neighbor Ron’s roof (who provides FRANK with wild boar, local fish, and other game meats) and found a mulberry tree overhanging the roof where they could gorge on mulberries.  I had dinner guests coming and couldn’t wait for animal control any longer, so I had to get back in the house and do some prep, and then head to the grocery store.  An hour later as I was coming back, there they were in the alley, unphased by my car, walking as slowly as they possibly could while foraging for bugs: 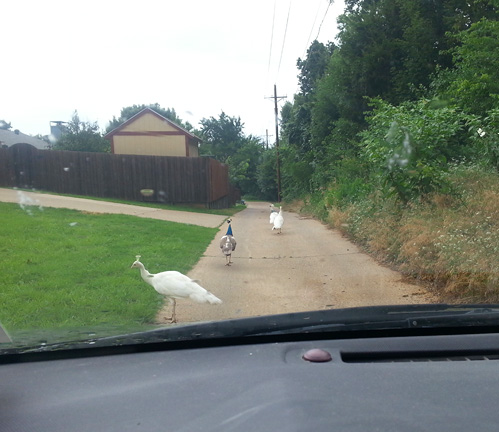 I honked at them, but they were in no hurry to move over.  Cars are of far less concern to them than people, apparently.  I tried to catch them, but they were too skittish.  If I’d had a long handled net (like ANIMAL CONTROL WOULD HAVE…knock knock!) I could have caught them and kept them safe for their owner.  But alas!  Animal control was busy chasing peacocks somewhere else in the city, I suppose.

This reminded me of a story my parents love to tell.  The year after all their children had left the house, they were enjoying a quiet early dinner one night, and the strangest sound came from the back yard.

“Oh, Jerry, you don’t know what a peacock sounds like!”

“I most certainly do, and that’s a peacock’s call.  Go look!”

Mom opened the back door and there was a big male peacock standing on the back porch, looking up at her as if to say, “I’m a little hungry, thank you very much!”

They gave him some table scraps and he happily took up residence in the lot behind our house, which was where our landlord stored his collection of rusting antique cars.  Each evening, the peacock would jump up onto the cars, fan out his gorgeous tail, and strut up and down, showing off to nobody in particular.  He lived there for several months before heading off in search of a peahen, or falling prey to the many coyotes that lived in the wilds behind the lot.

Peafowl are stunning birds.  The magnificent tailfeathers of the males were once so rare and highly sought-after that they were valued more precious than Gold in pre-Plague era Europe.  Some merchants who sought out peacock feathers in the far East could, after one trip, retire like a king for the rest of their life.

This entry was posted in Blog and tagged peacock, peafowl, peahen. Bookmark the permalink.

6 Responses to Roving Band of Peacocks