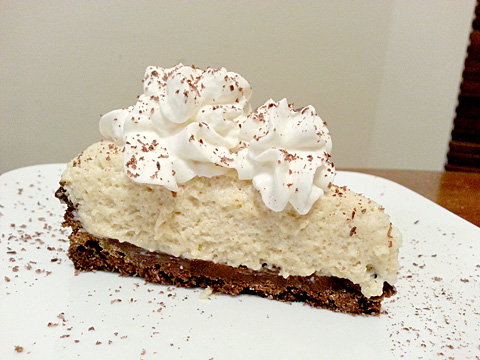 The “black bottom pie” is an ancient staple of Southern home cooking…most often found at church potlucks, family reunions, and Sunday suppers.  It’s not common in home kitchens these days, but a unique institution in Los Angeles, of all places, gave this regional favorite a solid spot on the national dessert roster.  The Ambassador hotel existed from 1921 to 2005, and it’s infamous and legendary nightclub, the Coconut Grove, saw 6 Academy Awards ceremonies, and was residence, performance space, and groove spot for everyone from Errol Flynn to Charlie Chaplin, Barbra Streisand to Liberace, Lucille Ball to Perry Como, Jimmy Stewart, and Joan Crawford.  RFK was assassinated in the hotel kitchen.  The hotel appeared in films like The Graduate, Pretty Woman, Forrest Gump, Apollo 13, The Wedding Singer, and Fear and Loathing in Las Vegas.  And the favorite desert at The Ambassador Hotel was…Black Bottom Pie.

The title bacterial infections treatment is a generic term that applies to ANY pie with a chocolate layer on the bottom.  The Ambassador’s version, created by their head chef Henri Bassetti, had a rum-infused, gelatin-stabilized meringue custard as the main filling.  And you can bet that virtually all your favorite stars and politicians tucked into a slice of this heavenly pie at least once in their lifetime.

The recipe was lost to the decades, but pie historian Adrienne Kane resurrected a recipe that I’ve been tweaking for the past week, in preparation for a friend’s retirement party.  She had mentioned in times past that her mother used to make a black bottom pie like they used to serve at the Ambassador, but she had lost the recipe.  And I wanted to give her a trip back down memory lane.

I’ve made a few unconventional choices in this recipe.  The first is to make it in a springform pan, rather than a pie plate.  A springform gives you the kind of depth you want to be able to serve a nice, tall, impressive slice of this pie.  The second choice was the use of sweetened condensed milk over the creation of a cornstarch-thickened milk and sugar paste.  It adds to the richness and stability of the final product.  (You can always make your own sweetened condensed milk if you just can’t handle using canned ingredients.  Google is your friend.)

***PLEASE NOTE***  This recipe uses meringue from raw egg whites.  If you are cooking for those with compromised immune systems, you may wish to substitute pasteurized egg whites.  For my purposes, as long as I know my eggs are organic and from cage-free hens, I have no hesitation eating raw eggs.

Into your food processor, place:

Whizz them until they’re mostly powder with a few larger crumbs for texture.  Pour them into a bowl and add:

Squeeze everything with your fingers until the ingredients are all moistened.  Pour them into a buttered 12″ springform pan and press them firmly and evenly on the bottom and halfway up the sides of the pan.  Bake the crust on the center rack of a preheated 375F oven for about 8 minutes until it is fragrant and just beginning to darken.  Remove it from the oven and let it cool.

Into the bowl of your stand mixer, place:

Beat at medium high speed until the yolks are thick and pale.  Turn the mixer down to the very lowest speed and let it continue.  In a heavy pot, combine:

Heat over medium heat, whisking constantly.  When the milk comes to about 150F, remove it from the heat.  Raise the beating speed of the mixer to medium, and begin pouring the hot milk in a thin stream into the egg yolks.  Continue until all the milk is incorporated, and beat 1 minute longer.  Then pour the mixture back into the heavy pot and return to medium low heat.  Cook, whisking constantly, until the mixture reaches 160F.  Remove from the heat and stir constantly for a minute.  Add:

Stir thoroughly.  Then pour about 2 cups of the hot custard mixture over:

Let the hot custard sit on the chocolate for a few minutes to melt it.  Into the remaining custard, add:

Stir very well, then place the hot custard, still inside the pot, into a chilled water bath to begin to cool it down. 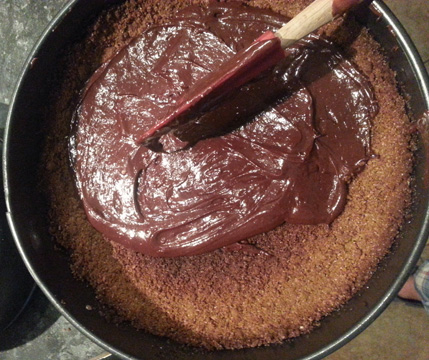 Thoroughly wash out your stand mixer bowl to eliminate ALL traces of fat from the egg yolks and milk.  Dry it thoroughly and add:

Beat to stiff peaks, or just under.  Do NOT overbeat.  If the whites become “chunky” and separate when you run a spoon through them, they are overbeaten and you must start over. 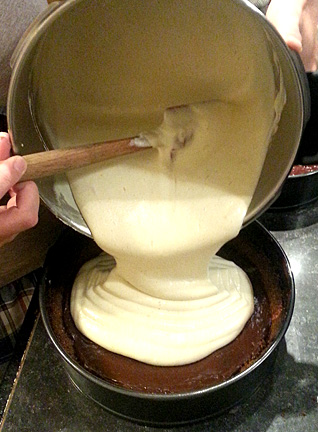 Optionally, top the pie with a layer of whipped cream and sprinkle on cacao nibs or candied ginger or shaved chocolate just before unmolding.

Before unmolding, run screaming hot water over your knife for about a minute.  Then run the knife around the inside edge of the springform to loosen the custard and crust from the rim.  Then unmold.  Slice the pie carefully with a hot knife, and enjoy!