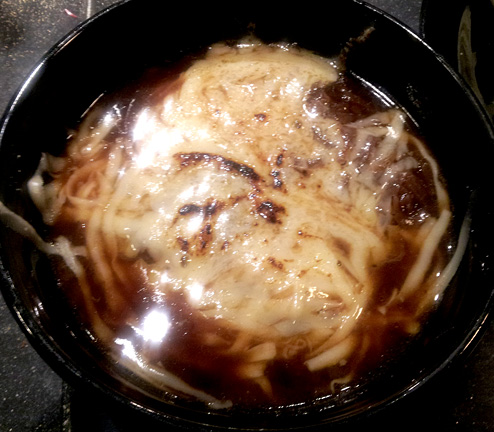 This seems to be everyone’s favorite soup.  From the instant that I posted on Facebook and Twitter tonight that I was making French Onion Soup for dinner, I had over 20 requests for the recipe.

In France, one of the first things a chef learns to master is onion soup.  It’s such a simple soup with precious few ingredients, and the judge of a chef’s skill and ability is determined by how he crafts his soup.  Every choice he makes changes the final outcome…which type of onion, the temperature for caramelization, the duration and speed of the caramelization, the type of broth or stock…

Most of us don’t have the ability or the time to start with veal bones, roast them, and create a rich, dark, dense, grease-free stock to begin with.  (The traditional starting point for an onion soup.)  This recipe is the current distillation of my experimentation with onion soup over the years.  Each time I make it, I tweak it a bit…but isn’t that was all passionate cooks do?  This recipe is a compromise between convenience and traditionalism.  I’m going to take my time caramelizing the onions, but I’m using prepackaged stock.

Start with the heaviest pot you have.  I either use my pressure cooker, or my enameled cast iron Dutch oven.  (I prefer my Dutch oven, but as I’m normally baking bread to go with the soup, the Dutch oven is busy filling that function, so I usually end up using my heavy pressure cooker.)  Preheat on medium heat while you begin slicing onions, adding to the pot:

I cut off the stem end and root end of the onion, then peel off the skin.  Then I slice parallel to the cut ends, and the onion falls into thin slices naturally.  As I get one onion sliced, I add it to the pot to make room on the cutting board for the next onion.  Stir the pot well with each addition.  Once all the onions are in the pot, add:

Stir well and keep the heat at medium.  Stir every 5 minutes until all the onions in the pot look wilted.  Lower the heat to medium low and add: 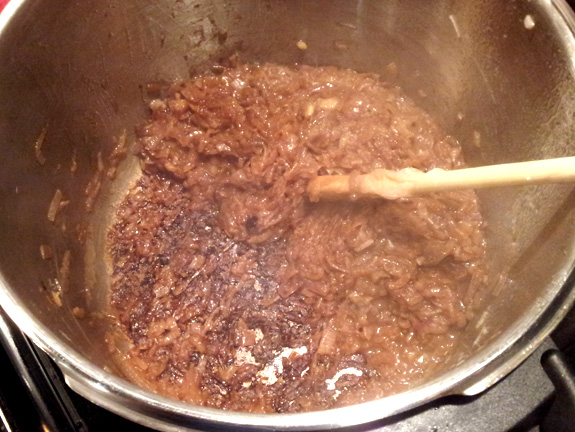 Sugars from the onions form a deep brown crust

Stir well, and then stir every 5 minutes.  You’ll begin to notice a brown layer caramelizing to the bottom of the pot.  Each time you stir for the first 30 minutes, scrape up most of that brown “fond.”  After 30 minutes, the onions should have taken on a darker color.  At this point, lower the heat to low.  Continue to stir, but don’t scrape the bottom.  Let that fond build up for another 30 minutes, stirring gently every 5.  Don’t be afraid if it looks like it’s burnt…as long as your heat is low, it’s not.  It’s building flavor.  This is what it looks like: 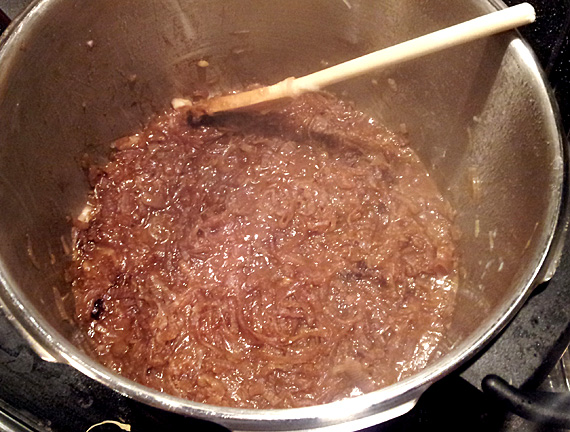 After an hour of cooking, your onions should be nicely caramelized.  To the pot add:

This step is optional.  It results in a thicker soup with much more body, which is the way I like it.  If you like your broth to be very thin and watery omit this step.  Stir the flour around well, then add:

2 cups red wine (the drier the better, and oxidized or “turned” wine is even better)

That vodka may raise some eyebrows, but onions, especially caramelized ones, are loaded with flavor compounds that are only soluble in alcohol.  So, in addition to the wine, that vodka gives a quick “unlocking” of flavors that you’d never get without it.  It will boil off and add no flavors of its own.  Stir well, scraping up all that fond from the bottom of the pot.  Turn the heat up to high until the soup is boiling, then reduce to medium low.  Cover the pot loosely so that some steam can still escape.  Simmer the soup for 45 minutes.  Then add:

This soup NEEDS salt.  Don’t be alarmed if you are tasting and it’s still missing “something.”  That something is salt.  I have, in the past when making large batches, added UP TO 1/4 CUP of kosher salt.  (Equivalent to 2 Tablespoons of table salt.)  Add a bit, taste it.  Swish your mouth out with water and taste again.  Keep adding salt a heavy pinch or two at a time until it’s just right.

The traditional presentation for onion soup in France is to ladle it over toasty croutons.  I normally take a baguette and slice it thinly.  Brush olive oil on the top, sprinkle with salt, pepper, dried basil and oregano, garlic and onion powder, and toast in the broiler until crisp.  Then flip the slices, repeat with olive oil and seasonings, and sprinkle with shredded parmesan, and toast on that side.  Then let them cool.  These will keep for a day or two, you can make them ahead.

Of course, the soup is also then traditionally capped with Gruyere or Emmenthal and broiled until it begins to toast.  You can do this under the broiler, but then the bowls get SCREAMING hot and it takes the soup AGES to cool down to a temp that won’t burn your mouth.  So I usually take my propane torch from the garage and melt and toast the cheese that way.

This entry was posted in Recipes, Soups and tagged French. Bookmark the permalink.

One response to “French Onion Soup”