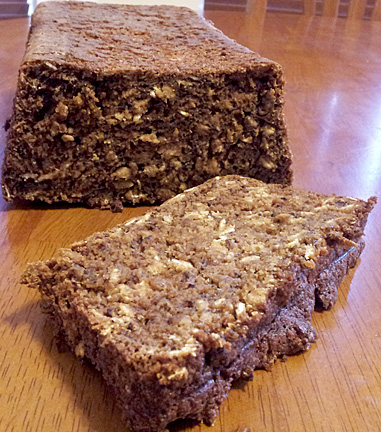 My parents raised me on a whole grain diet with NO processed sugars.  I’m talking course whole wheat and cornmeal, brown rice, with honey as the only permitted sweetener.  Needless to say, many of my mom’s dessert recipes, particularly cakes and quick breads, suffered as a result.  The texture was never comparable to recipes made with white flour and sugar.  And, as a result, I left home at age 18 with a scorn for “whole foods.”  I spent several years indulging in sugary, white-flour treats…white rice…finely ground cornmeal…

But eventually, I started missing the “wholesome” taste of my mom’s cooking.  And that led me back to incorporating as many whole grains as possible in my cooking.  I still use sugar, of course, become nothing can take its place when it comes to baking.  And while whole grains typically interfere with a cake or quick bread’s ability to rise and be fluffy, I eventually gave in and realized that dense, nutty, toothsome cakes and quick breads had their place, and can be relished.

I developed this banana bread recipe many years ago in an attempt to provide a wholesome breakfast.  I turn this banana bread into French Toast and it’s downright amazing.  It has the added benefit of no added fat…at least in the form of butter and oil.  The egg yolks have fat in them.  But I’ve substituted a little more banana to cover for the fat content, and by whipping the whites separately and folding them in at the end, you get a bit more lift, like you’d have had if you’d creamed butter and sugar together in the beginning.

As in all banana breads, this recipe is best when your bananas are an inch away from being rotten.  If you try to make it from bananas which still have some yellow in the peel, it won’t turn out well.  The blacker the banana, the better.  If your bananas get totally black and you still don’t have time to make banana bread, toss them in the freezer.  Then let them thaw an hour on the countertop before you use them to make bread.

YES, this banana bread is dense and gritty.  It is meant to be that way.  It contains all whole grains and is better for you than most other quick breads, as a result.  Enjoy!

Stir together until totally mixed.  In a separate bowl, combine:

Mash with a fork, then mix with a whisk until smooth.  In the bowl of your stand mixer, combine:

Beat on high speed until the white come to firm peaks.  (This means that when you pull the whisk up out of the whites and flip it right-side-up, the peak of the white doesn’t sink over…it stands straight up.)

Add the mashed banana to the dry ingredients and stir until well combined.  It will seem dry at first, but will come together into a very moist batter.  Fold the egg whites into the batter gently until no streaks of white remain visible.  Pour the batter into a loaf pan that has been sprayed with cooking spray and dusted with flour.  Bake on the center rack of a preheated 350F oven for 60 minutes or longer, until a toothpick or knife inserted into the center of the loaf comes out clean with no streaks of wet batter.

Remove from the oven and cool in the loaf pan for 15 minutes.  The bread WILL fall.  Invert the loaf pan onto a cooling rack and tap the loaf out of the pan.  Let it cool on the rack fully before attempting to slice. 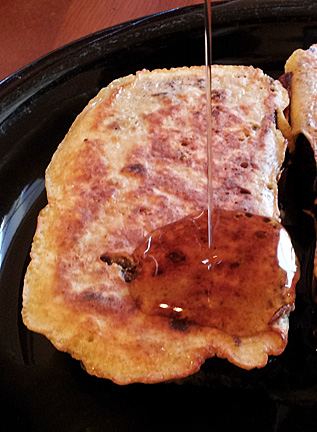 When I turn this into banana bread, I slice it thick, drizzle the juice of an orange over it, dip it in a batter of egg, brown sugar, a bit of flour, vanilla, cinnamon, and cream, and fry in butter on a skillet until nicely browned on both sides.  IT IS DIVINE!

This entry was posted in Breakfast, Quick Breads, Recipes, Vegetarian. Bookmark the permalink.