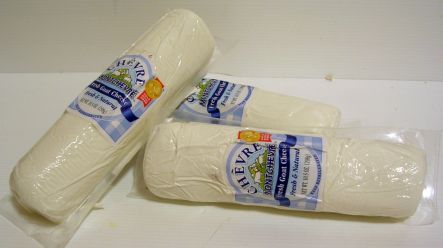 Commercially produced chevre tastes like a wet goat. Which, honestly, is okay by me. But there’s a better way…

The pungent, goat-y chevre you get in the grocery store is an acquired taste.  I’ve definitely acquired it.  But many people haven’t.  Part of the reason it’s so pungent is that it’s old.  The longer goat cheese sits, the more pronounced its flavor becomes.

This flavor is caused by an enzyme called “lipase” that exists in ALL milk, regardless of the animal it comes from, but is present in much higher quantities in goat’s milk and sheep’s milk than it is in cow’s milk.  Thus, the cheeses made from goat and sheep milk tend to be correspondingly more sharp and pungent than cow’s milk cheeses.

You can actually make ANY cheese from ANY milk.  (Including human milk!)  Goat cheddar is divine, and takes fewer months to reach the sharpness that takes a year or longer with cow’s milk.  But making hard cheeses for ageing is much more complex and requires more specialized equipment.  To make divine fresh chevre, all you need is a thermometer, some cheesecloth, a pot, and some goat milk.  Oh, and a bacterial culture called “mesophilic cheese culture” which you can get easily on Amazon, plus rennet which you can also get on Amazon, or get both from most local home-brew shops.

Finding the goat milk will undoubtedly be your hardest task.  Use Craigslist or LocalHarvest.org to start, and you’ll probably find a local goat dairy that sells their milk.  So many kids are allergic to cow’s milk that it’s generally pretty easy to find goat’s milk.  Many grocery stores carry it, also, if only in the canned form.  (Which WILL make chevre, but not a superior one.)  Raw milk will render the best cheese (and also require less bacterial culture), but pasteurized milk will work just fine for this particular cheese.  (The ultra-high temp pasteurization and aggressive homogenization processes used in industrial milks render them un-usable for making hard aged cheeses, but they’ll do okay for fresh cheeses like chevre and ricotta and paneer.)

The following recipe is for 1 gallon of milk.  You can scale up or down depending on how much milk you have.

In a large non-reactive pot (meaning NOT aluminum or cast iron…stainless steel or enameled pots only!), add:

Over medium heat, bring the temperature to 75F.  You should stir the milk often in a circular motion from the bottom up to evenly distribute the heat.  If your pot is very thin and light, you will want to stir more frequently, scraping the bottom of the pot with a spatula, so you don’t scorch your milk.  But since you’re only heating to 75F, that’s not a real danger as long as you keep the heat moderate.

Remove the milk from the heat and sprinkle on:

(Mesophilic starter is a combination of several strains of lactobacillus bacteria that “digest” milk sugars…ie “lactose”…and produce lactic acid as a byproduct.  This lactic acid is what makes chevre taste tart, and is part of the process that causes the milk to curdle, or separate into solid curds and liquid whey, which happens any time a milk product is acidified.  Ever accidentally added buttermilk or old spoiled milk, both of which are acidic, to your coffee…also acidic…and seen the grossness that ensued?  Same principle here:) 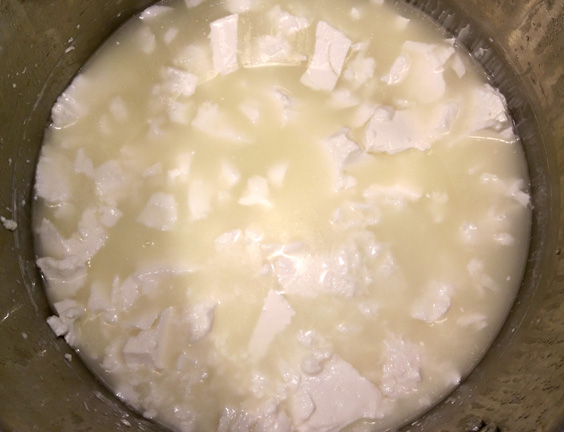 The separation of curds and whey…a part of the cheesemaking process for every cheese from Asiago to Zamorano.

Let the culture sit on the surface of the milk for 5 minutes.  The GENTLY stir using the same slow bottom-to-top motion for 2 minutes using a VERY CLEAN spoon.  You don’t want to introduce bad bacteria to your warm milk, only the correct bacteria!

Use the instructions on your rennet to prepare enough rennet for 1 gallon of milk.  Generally, 2 drops of animal rennet dissolved in 1/4 cup of cool water is sufficient for 1 gallon of milk for chevre, but some rennets are stronger or weaker.  Add the diluted rennet to the milk and stir again, VERY gently, up and down, for 2 minutes.  Then cover the pot and forget about it for 12-16 hours at room temperature, or as close to 72 degrees as you can get.  If your room is warmer, the cheese will curdle and culture more quickly, and you’ll have a stronger flavor.

By the way…what the heck is rennet?  Rennet is a combination of complex enzymes that are usually derived from partially-digested milk inside the stomach of a calf.  You also have these enzymes in your stomach when YOU were a calf, but most of us lose the ability to produce them as we get older.  This is called “lactose intolerance” and is the reason you toot a lot when you drink a glass of milk.  (Drinking raw milk will not result in the same gastric disasters, because raw milk contains many lactobacillus bacteria that will naturally digest much of the milk’s sugars for you.)  Cheese was invented…or, rather, discovered…millenia ago when shepherds would save milk inside a sheep or goat’s stomach (a convenient waterproof sack that didn’t leak) but after a few days, the milk had turned to cheese.  Enzymes similar to rennet can be extracted from some vegetables, like mallow, thistles and nettles, for the production of fully vegetarian cheeses.  Mass-produced cheeses you get in the cheese section at the grocery store use a type of rennet not available to the public that’s a result of a genetically-modified bacteria that secretes the same enzymes found in rennet.  Because these aren’t made by a small cheesemaker who keeps a careful eye on his milk during the process, the inconsistencies that result from animal and vegetable rennet leave a massive cheese factory at risk of a bad bad, ruining tens of thousands of dollars of product.  So they need this synthetically-created rennet because of its precise composition.  (Folks who avoid GMOs should only buy artisan cheeses, as a result.) 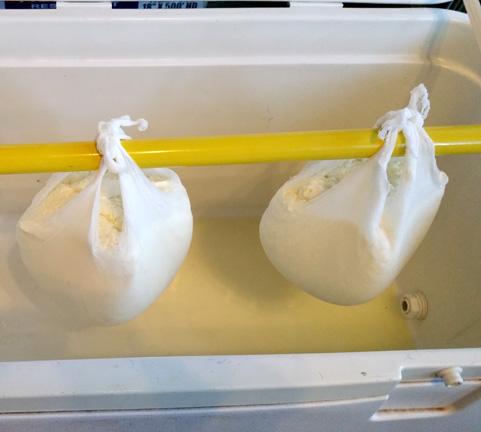 Prepare your squares of cheesecloth or butter muslin.  Butter muslin will only need 1 layer, but cheesecloth will need at least 3 layers.  The size of your squares will depend on how much cheese you’re making.  For a 1 gallon recipe, an 18″ square should be sufficient.  For larger recipes, use larger squares, or multiple smaller squares.  Dampen the cheesecloth, wring it out, and spread it out into a colander.  Then set the colander into a larger bowl to catch the whey.

Remove the lid from the cheese.  You’ll see that the milk has now separated into a solid white mass (the “curd”) and a greenish liquid (the “whey.”)  Using a CLEAN slotted spoon (or better yet, a kitchen spider), GENTLY scoop the solid white curd out of the pot and set the curd into the cheesecloth-lined colander.  As you scoop, the curd in the pot will start to break up, so be as gentle as you can.  As you get most of the curd out of the whey, you can switch to a strainer to get as much curd as possible.  Pour the final whey through the strainer to get all the last few bits.

While you can discard the whey, that’s a huge waste.  (Especially with expensive goat milk!)  That whey is delicious and full of protein and probiotic cultures.  At the VERY least, feed it to your plants or pets.  But it makes a fabulous base for smoothies, or substitute it for water in any bread recipe for an outstanding loaf!

Bring the corners of the cheesecloth together and tie them in a solid knot.  (You can tie 2 opposite corners first, then the 2 remaining corners.)  Then hang the cheese to drain in a cool place (as close to 72 as possible!)

How long you drain the cheese will dictate its final texture.  For a very soft cheese, you only need to drain about 6 hours.  I drain mine for 12 hours, which results in a firm but moist cheese that crumbles easily.  If you want that chalky-dry texture you get in chevres at the grocery store, you’ll need to hang for upwards of 24 hours, or get a chevre mold and rig up a cheese press.  But that’s not the best texture for chevre.  The commercial creameries do it that way because they’re shipping their cheeses and they may be on the shelf for a few weeks, which means they need to press out as much whey as possible.  (The higher the moisture content, the more perishable the cheese is.)

12 hours is the sweet spot for a creamy, rich chevre that’s milder than commercial chevre, but with a pleasant bite to it.  Don’t bother collecting the whey that has drained and been sitting for hours, it’s too fermented for most people to enjoy.  But your dog or cat might love it!

Posted in Side Dishes, Vegetarian