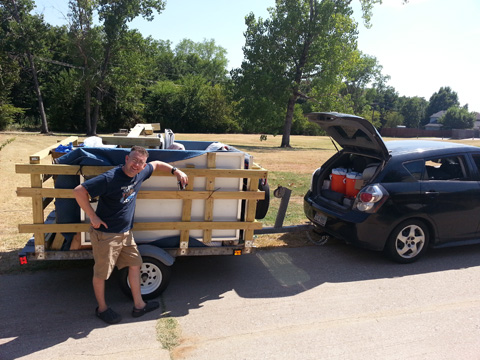 It begins.  My annual pilgrimage to Burning Man.  I’ll explain more about Burning Man in a later blog, because right now, it’s about the journey there.  And boy, was I ready to be on the road.  The last month has been nothing but frantic preparation for Burning Man.  Way more than normal.  In the past month, I built a 750watt solar array to power our camp, converted a big chest freezer into a refrigerator to run off the solar array, made a burn barrel by carving our camp name “Pot Luck” into the side of a 55 gallon steel barrel and welded cast iron skillets onto the bottom as creative feet, bought a rusty used trailer on Craigslist and rehabilitated it (so that I could carry all this stuff, which collectively weighs over 1,000 pounds), plus cooked a week’s worth of food for 35 people.  So, as you can imagine…I’m a little tired.

My buddy Ross is with me.  Ross was on my very first trip to Burning Man.  While this year marks my 5th burn, Ross is returning for his 2nd.  And we hit the road yesterday, very nervous about this ageing rusty trailer and my little Pontiac Vibe’s ability to haul it all the way to remote northern Nevada.  The drive yesterday was uneventful, across north Texas.  But as soon as we hit the border with New Mexico, the world changes.

It’s nearing midnight and just across the border I see the gleaming lights of a mega truck stop.  I figure we should stop to pick up a smidgen of beer or some Scotch, since we’re going to be spending the evening in a cheap Route 66 motel, so we pull into the truck stop and dash in, a few minutes before the alcohol sales cutoff at midnight, but the clerk tells us, “Sorry folks, this is a Christian truck stop.  We don’t sell alcohol.”

In my mind, I’m thinking, “So I suppose that when Jesus turned the water into wine, it must have been alcohol free wine?”  But I don’t say it.  The poor clerk didn’t make the rules, and he’s probably sick and tired of explaining a hundred times a day why they don’t sell beer.  But I have always found it bizarre when some Christian denominations stigmatize alcohol, when others, like the Catholics, tend to keep the alcohol business in business.  Wine is mentioned far more often in the Bible than water.

Back on I-40, we pass the tiny village of San Jon.  Somehow, its population of about 300 hardy souls keeps alive a 24-hour Indian restaurant.  ??

We stop for the night in Tucumcari.  I’ve driven past the Tucumcari exit a thousand times since I was a kid.  I was always puzzled by the big highway signs announcing that the town has 35 hotels, 40 restaurants, etc, when it’s barely a blip on the map.  Turns out Tucumcari is ideally located on the historic Route 66 between Chicago and Los Angeles, where many travelers would just be reaching this spot near dark.  So this unassuming village blossomed into an overnight stop on America’s greatest road trip, and the town is still full of vintage architecture and it’s downright charming. 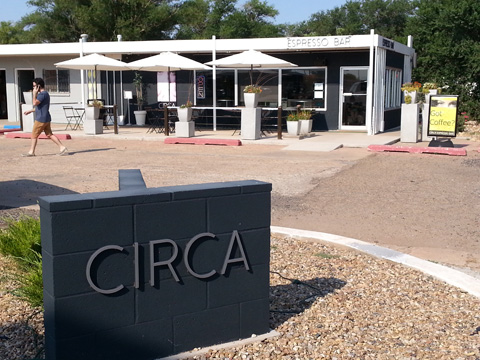 Take this hotel, for instance.  If this 1950’s wonder, fully restored to its chic heyday splendor, was sitting on South Congress street in Austin, it would be $400 a night, booked a year out.  But here in Tucumcari, it’s just another $30 a night hotel.

After 8 hard hours of sleep, we trudge over to the Kix 66 diner, one of the only spots in town open on a Sunday, and order one of their legendary big-as-your-face cinnamon rolls, which they serve split in half and caramelized on the griddle.   After that comes a massive plate of huevos rancheros, served with a fiery Hatch green chile sauce that is absolutely divine.  (Any time I can have beans for breakfast, I’m a happy camper.) 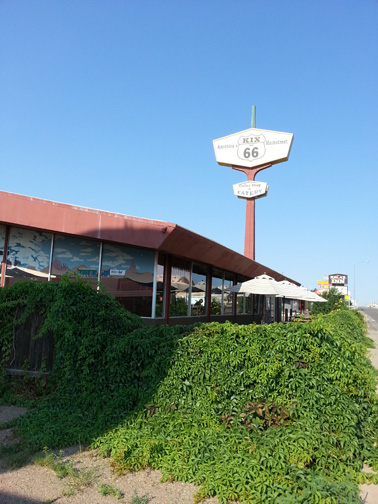 Then we stroll back toward the hotel for an espresso when a gentleman comes up to us from the crumbling ruins of a hotel.  (Almost half the hotels in Tucumcari are boarded up since the volume of travelers has decreased.)

“What do you think about this place?” he asks. 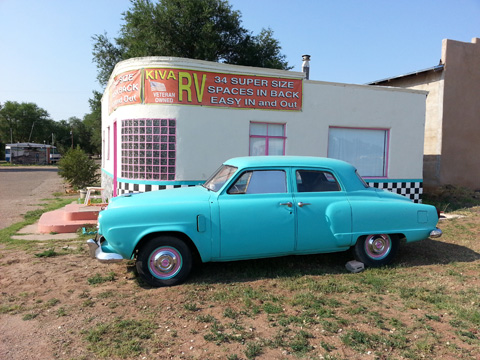 Turns out he wants to open a bakery and is looking for the perfect spot.  He talks to us as if we’d been friends all our lives.  He really wants to know what we think about his bakery idea.  I told him he’d better bake a bread filled with Hatch green chiles and cheddar, and that just might make him famous, and next time I drive through Tucumcari, I expect to taste it.  He strolls with us for 6 blocks past an RV park with an ageing Studebaker parked out front, and he tells us the history of the car.  (It was a race car back in the day.)

We part ways with a friendly handshake, and duck into the hotel’s espresso bar.  As I thumb through the pages of a history book on Tucumcari, the delightful girl behind the counter whips us up an Atomic Espresso milkshake.  We have 3 choices: the White Sands (white chocolate), the Trinity (dark chocolate), and the B2, which has 4 shots of espresso, coconut, pineapple, and caramel.  She says the B2 is her favorite, so we get that, even though it sounds somewhat bizarre.  Turns out, coffee caramel pina colada is astonishingly delicious!  Like…really, really good.  As we walk out of the coffee shop exclaiming our astonishment, we pass a drainage ditch overgrown with Johnson grass, and in the ditch is a man on a horse.  He waves at us and notices the slightly surprised look on our faces, and he explains why he and the horse are in a ditch.

“The horse is scared of lions,” he says. 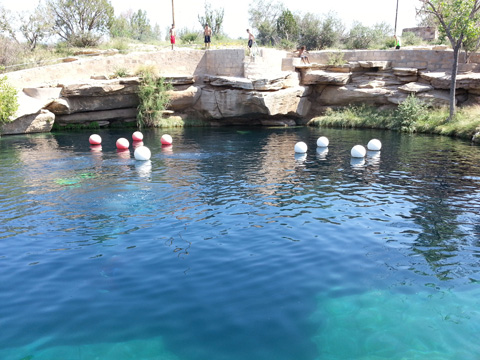 Well, that’s understandable.  So am I.  But no time to get down in the ditch and hide from the lions, because the Blue Hole beckons us westward.  The town of Santa Rosa has advertised this 80-foot deep artesian spring of ice-cold, crystal clear water to parched desert travelers for over a century, and while I’ve read about it plenty of times, I’ve never stopped to take a dip.  No time like the present!

The Blue Hole is a really cool place to stop if you’re traveling along I-40 in this part of the world.  It’s in a city park and it’s totally free to swim there.  And they actually encourage you to jump off the cliffs into the water…a rarity these days.  Just be aware that the water is REALLY REALLY COLD!  And watch for SCUBA divers when you leap in…this is a popular place to get open water certified because of the depth and clarity. 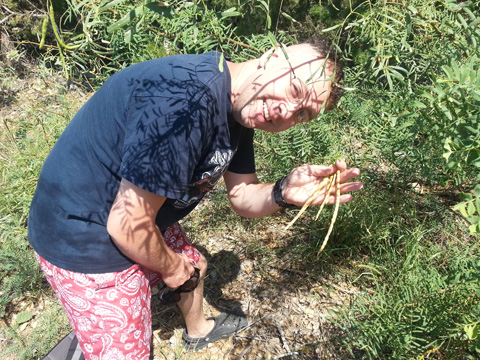 After a chilly swim, we forage some mesquite beans from the trees near the hole.  Mesquite trees produce beans that are filled with a sweet, sticky paste and it was an important staple for Native Americans.  Ross and I are going to infuse a nice Scotch with the mesquite beans and some charred mesquite wood as a Burning Man experiment.  I’ll let you know how it turns out.

Back on the road we stop at a few of the cheesy truck stops that sell southwestern trinkets and local cherry cider (YUM!) and FIREWORKS!  It’s legal in New Mexico to sell fireworks year-round, and some of these truck stops have even professional-grade fireworks.  It’s pretty crazy! 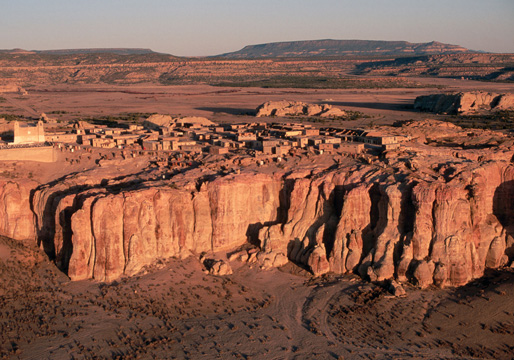 Then we buzz west through the epic desert landscape, past Native American pueblos, including the one at Sky City, where the Acoma people still live with no electricity or running water in adobe huts perched spectacularly on the edge of a flat-topped mesa.  (Photo courtesy of doughocking.com)

I am always stunned as the massive San Francisco peaks rise out of the northern Arizona desert, signaling the arrival into Flagstaff, one of my favorite cities in the world.  If you’ve never been to Flagstaff, you owe yourself a trip.  It regularly appears on the “Best Cities to Live In” for lots of reasons.  It only has about 60,000 residents, but the food and microbrew scene is truly world class, it has superb schools and an excellent university, it sits at 7,000 feet above sea level, so summers are incredibly mild (it was 68 degrees when we arrived on August 18 at sunset, and got down into the low 50s that night) and winters can be chilly but with only occasional snow…have I convinced you yet?  How about that it’s about an hour’s drive to the Grand Canyon?  Or that the charming downtown nestles around a historic train depot and is full of independent shops, galleries, cafes, and breweries?  Flagstaff is a model of what the American local economy should be like.  It’s a small town that feels like a big city, in the middle of the most scenic wilderness in the world.  And it always smells like pine trees.  I absolutely love it. 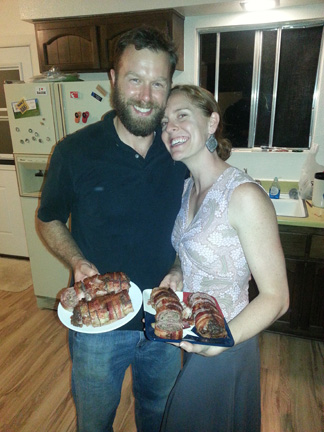 We meet my wonderful friends Audrey and Scott, who met as park rangers, and eat dinner at the Beaver Street Brewery, which has a stunning menu and excellent beer.  Then we go back to their brand new house that they’re just moving into for dessert.  Scott and Audrey know me VERY well.  So the dessert was actually Bacon Explosions…basically a woven mat of bacon with heavily spiced sausage smeared on top, and then rolled up and smoked slowly until all the fat has rendered out, and sliced into a roulade.  There’s nothing sweet about it.  (Which is perfect, because I don’t eat dessert!)  And it’s so lovely and cool outside on their massive deck that I forego the comfortable bed and spread out my sleeping bag on the deck and indulge in the 52 degree, pine scented air.  (In Dallas we throw a party when it drops below 90 degrees at night.)

Tomorrow, a whirlwind trip to the Grand Canyon before heading further west toward Burning Man!