Some of you know that I’ve just returned from yet another mammoth road trip, this time to the northeast.  I was scheduled to speak at a conference at Vanier College in Montreal, and rather than fly, I decided to take a scenic road trip through autumnal New England, take my time, and enjoy the drive.  With me was my best friend since high school, J-P.  He and I have traveled to all 7 continents together, but it’s been several years since we’ve taken a trip.  So we were excited to hit all the famous spots along the way.

But the first stop was actually in the opposite direction: west.  I had to visit the town where I grew up, Abilene, Texas, to speak at a fundraising event for my old high school.  Federal, state, and local funds keep getting tighter every year, so concerned parents at my old school district started the Wylie Bulldog Education Foundation.  The foundation raises money throughout the year to support student scholarships (so students in need can fulfill the dream of going to college), and classroom grants for teachers (so teachers can continue providing creative teaching opportunities without having to reach into their own pockets and purses).  The foundation was holding a special fundraising dinner, and they asked me to be the keynote speaker. 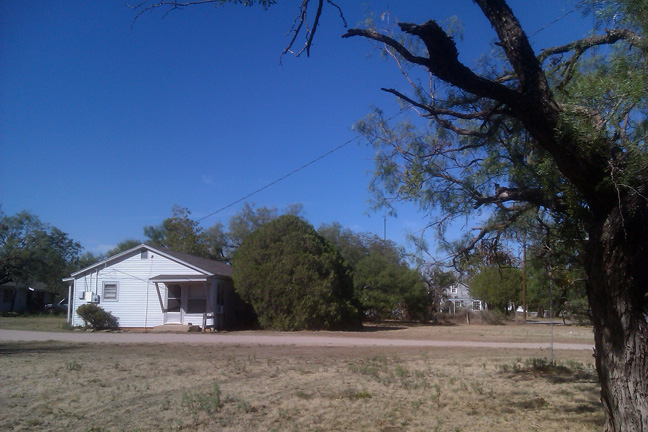 The day before the event I had some TV spots, and that afternoon I had a chance to drive around the city and visit my old haunts.  The first was the house where I grew up.  We lived in 4 different houses in Abilene throughout my childhood, but this one was the longest and most memorable.  It was a small, humble rent house on a dusty, weedy lot.  There were always possums or raccoons living under the house.  Occasionally we’d find snakes INSIDE the house!  (No rattlesnakes inside, thank God, but plenty of them outside!)  But it was home.  It didn’t look like anyone was living there now.  Bittersweet to see it.

I also got to eat some barbecue at Joe Allen’s, which is an Abilene institution.  Joe Allen is a local rancher who raises much of the meat that he cooks at his legendary restaurant.  More changes, though.  The old, greasy, smoky dive I was familiar with had been torn down, and a new building was going up in its place.  The restaurant had moved around the corner to a new, clean, spic-and-span facility which had none of the greasy down-home character of the old one.  It was sad, but the food was still good!  Of course, the Abilene Reporter News sent a photographer to document their home-grown celeb eating at his favorite BBQ joint.  Unfortunately, the photos ran on the FRONT PAGE of the paper the next morning, including one of me with BBQ sauce all over my lips! 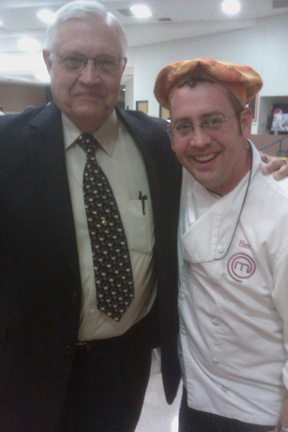 The night of the event, I got to invite many of my old teachers, who I was able to “roast” in my speech!  It was lots of fun.  I got to visit, poke fun of, and thank people who had an instrumental hand in the development of my personality, skill, and character.  It was incredibly emotional.  Many of the teachers had retired, like Mr. Cheek, my calculus teacher.  In my speech I talked about how I couldn’t even remember what a calculus derivative is…it’s been 17 years since I was in Mr. Cheek’s class.  But almost every day I remember him, his personality, how he used to throw chalk at my head when I’d give a stupid answer…  And how my interaction with him inside and outside the classroom taught me to be an adult who, despite being almost totally right-brained, would sit down and work through any problem in life from a calculated and logical perspective.  He taught me that even though you may be in a position of supreme responsibility…you can always have fun and throw chalk at someone to break the ice.  I believe I owe much of my public speaking style to Mr. Cheek.

Speaking of which…I opened the speech with the musing that, while in high school, I was a very prolific public speaker.  Almost weekly I was speaking at a Lion’s Club or Rotary Club dinner, or in a public speaking competition somewhere in the nation.  But when I graduated from Wylie in 1995, when I was 17 years old…I gave my last public speech.  And now I was back on that same stage…17 years later…giving my first public speech in 17 years. 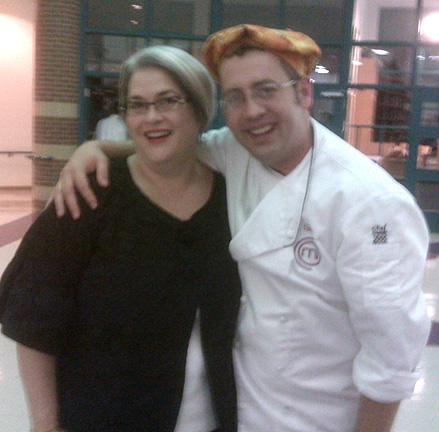 Miss White!  One of my favorite teachers.  Like I had mentioned earlier, I couldn’t actually remember WHAT science class Miss White taught, or what year I was when I took it.  My interaction with Miss White was almost entirely outside the classroom.  She was one of those teachers who poured EVERY INSTANT of her life into teaching.  The 7 hour class day, for her, was sandwiched between HOURS of sponsoring cheerleading, speech and drama, academic clubs, student council.  I traveled all over the state with Miss White during my 4 years in high school.

When Miss White was teaching, her hair was dyed purple.  Of course, she preferred to call it “Eggplant” and would snap at me any time I referred to her purple hair.  “It’s EGGPLANT, Ben.”  So it was fun to tell her how eggplant has become one of my favorite ingredients, I grow it in my garden and cook with it all the time, and EVERY time I cut into an eggplant, I think of her.

Miss White was one of those teachers that always made you feel like you were an equal.  She never talked down on you.  She always considered your opinions, no matter how immature or uneducated!  And she’s the one who really taught me how to be a fun person.  Virtually everything she ever said was followed with a laugh.  I have such incredibly fond memories of Miss White…it brought tears to my eyes to see her again.

And then there’s Mrs. Davis.  Linda Davis was my honors English teacher my junior year.  Mrs. Davis is a polio survivor, but the childhood disease left her without the use of one arm, and with limited use of the other.  She had been teaching at Wylie for a long time before she taught me and all 3 of my siblings, and she is STILL teaching there today!  She’s legendary.  And, as you can imagine with kids around, she endures countless jokes about her disability.

One of my most potent memories in high school is of Mrs. Davis stapling papers.  A less determined teacher might just allow her teacher’s aid to do the stapling, considering she only has motor control over half of one hand.  But not Mrs. Davis!  While we would be fastidiously doing a vocabulary test, she would staple papers by carefully moving the papers into place in the stapler using the hand that she could move, then swinging the arm she had no control over on top of the stapler using the force of her shoulder, then slamming her chin down onto the hand which would depress the stapler.  Understandably, there were lots of jokes about her paper stapling methods…but to me, it taught me I could never take a single thing for granted.  Stapling papers is a menial, mindless task for most of us.  For Mrs. Davis, it was somewhat monumental.  But she found a way to do it herself, despite the odds.

Of course, stapling papers isn’t nearly the biggest impact Mrs. Davis had on me.  She helped me hone my writing skills and fall in love with literature.  And, for many major projects, she offered an option to create a short film, rather than a paper, which has directly led me to the love for television and film that I have today, and the fact that I was directing and acting in short films as a teenager developed the comfort and naturalism I feel when a camera is pointed at me today.

I was honored to have Mrs. Davis introduce me at the dinner…and without further ado, I’ll share with you some video clips from that night.  Oh…and we raised over $90,000 for scholarships and classroom grants that evening alone.  They auctioned off one of my pumpkin carrot cakes, and it went for $1500!!!