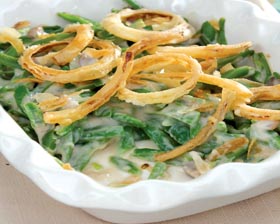 Ah, green bean casserole…that staple of Thanksgiving dinners and church potlucks for decades.  So easy that even someone who can’t cook can make it, because all you have to do is open a can of green beans, a can of cream of mushroom soup, and a package of French fried onions and it makes itself.  I’m not sure who invented this casserole, but the flavor combinations are certainly spot on.  The only problem is that, when working with canned ingredients, the flavors are muted, old, and canny.  Making green bean casserole from scratch does add a bit of time (especially if you make your own fried onions) but for a truly epic meal like Thanksgiving, why on earth WOULDN’T you go to that effort?

Since this dish has 3 components, we’re going to visit each one individually.  Feel free to adopt only one or two of the 3 techniques if you want, to end up with something “semi-homemade” but still infinitely better than using 3 processed ingredients.  Because 2 of the 3 components can be made a day or two in advance, this eases some of the Thanksgiving Day cooking responsibilities.

Obviously, fresh is best.  Lengthiest prep time, of course, so if you’re just looking to quickly elevate this recipe, skip the can and go for frozen green beans, which have been previously blanched and then flash frozen.  You’ll still get that lovely green flavor from the beans, and a nice crisp texture.  In the frozen section you’ll find whole green beans as well as “Frenched” green beans, which are cut into thin strips.  The choice is entirely yours, though I have to admit I like the body and crunch of the whole bean pods.  You’ll need a pound of frozen beans.

To do it entirely from scratch, first plant some beans…  Ha ha, just joking!  Get the freshest, firmest, brightest beans you can find:

Snap off the stem tops, wash them, and prepare a large pot of boiling water, salted generously so that it tastes like the sea.  To the side, prepare a giant bowl of ice water.  When the water is boiling, drop a big handful of the beans into the water and boil them for 1 minute.  Quickly remove them and plunge them into the ice bath to stop the cooking.  Bring the water back to a boil and continue blanching until all the beans are cooked.  Remove them from the ice water bath and store them in the fridge for up to a few days until you’re ready to use them.

Opening a can of condensed cream of mushroom soup is easy.  But so is making it from scratch.  Not QUITE as easy or as quick.  But certainly not hard.  To get started, you need to choose your mushrooms, and to be honest, the little cheap white button mushrooms from the grocery store are…just fine!  They are delicious.  A species of agaricus which can also be found commonly in the wild, did you know that the brown creminis, white buttons, and giant portobellos are the exact same mushroom species?  The white buttons are a freak anomaly discovered in a mushroom farmer’s bed in Pennsylvania in 1926, and spores were taken from those mushrooms and the white variety was soon being grown on a commercial scale because, at that time, people thought white foods were more refined.  But that giant portobello and that tiny white button are genetically identical, they’re just at different growth stages.  So no need to pay a premium for giant portobello caps for this recipe.  Most mushrooms have a more intense flavor and better texture when they are younger, anyway.  Giant portobellos are fun for their size to stuff or have big slices of mushroom, but the little buttons have more flavor and better texture!

However, the button mushroom is among the least flavorful of the mushroom varieties, so I encourage you to venture out to an Asian market to see the vast array of fresh cultivated mushrooms available to you.  You’ll find shiitakes, oysters, king oysters, maitakes (hen of the woods), enokis, and probably a half dozen other varieties, all of which have their own unique, explosive flavor and fun shape.  Buy several to yield a recipe with truly fabulous flavor.

Another alternative is to forage wild mushrooms yourself.  Fall is wild mushroom season for much of the southern half of the US, as well as the entire Pacific coast.  You’ll find chanterelles, oysters, boletes (porcinis), hen of the woods, chicken mushrooms, shaggy manes, meadow mushrooms (same as commercial buttons), puffballs, and even the odd autumn morel in places like coastal California and central Texas!  NEVER eat a wild mushroom unless you are positive of its identification.  (Even a forkful of amanita virosa or gallerina autumnalis will destroy your liver and result in certain death if you don’t immediately have a liver transplant!)  You can check out my blog posts here and here and here on wild mushrooms for more information on foraging.  I live in the suburbs of Dallas, and I find edible wild mushrooms all the time in city parks and neighbor’s yards.  You can, too!

Whatever your route, you want to end up with:

Chop them however you desire.  Some people don’t like a very chunky soup, but I do!  Just remember that some mushrooms will shrink to almost half their pre-cooked size, so chop them larger than you want their final size to be.  I like my soup so chunky that I’ll just quarter button mushrooms rather than slicing, or I’ll leave some smaller chanterelles or king oysters whole so that the complete mushroom can be seen in the final dish, which is stunning.

The first step is what I call “dry saute” which is to toss a handful of the mushrooms into a dry pan over medium high heat.  Give them a little salt.  Stir or toss the pan every 20 or 30 seconds.  Eventually the mushrooms will expel their water content, which will sizzle off and concentrate in the pan.  Continue in batches and don’t crowd that pan until the mushrooms are dry sauteed.  This concentrates their flavor better than if you started them in fat.

Once the mushrooms are all dry sauteed, hit the pan with:

Return enough mushrooms to the pan to make a single layer on the bottom.  Any more than that, and the mushrooms won’t brown well.  Let them get nice and browned on one side before tossing or stirring the pan.  You can actually fry mushrooms all the way until they are practically dried, but sometimes they get a bit chewy at that stage.  But most people don’t cook mushrooms long enough to really get a good golden brown crust all over them, so leave them in for a bit.  Remove with a slotted spoon and continue in batches until all the mushrooms are nicely browned.  You may need to add additional fat to the pan each time, which is fine.  When the mushrooms are all cooked, add to the pan:

Saute over medium heat until the garlic begins to take on a little golden brown color around the edges.  Then add:

Stir constantly as the flour soaks up the butter and coats the onion and garlic.  Cook for about 2 minutes until the flour just begins to turn golden.  Then add:

Return the cooked mushrooms to the pan.  Raise the heat just a bit and stir constantly with a whisk until the mixture thickens to just beyond what you’d want for a soup.  Remove from the heat immediately and continue to stir another minute or so.  Set aside until ready to use…it will thicken as it cools, but will loosen up a bit after baking again with the beans.  Prepare this a day or two before and store it in the fridge, and the flavor will improve dramatically.

Now, if you went to all the trouble of blanching fresh beans and making homemade cream of mushroom soup, I’m not gonna be mad at ya if you just open a bag of French fried onions.  Because I try not to deep fry things at home that often, it’s just messy and expensive.  But deep frying onions is super quick, you can do it in a regular pot with a quart of oil.  Here’s how:

Heat a pot with about 2-3″ of canola oil in it over medium heat to 375F while you prepare the onions.

Sprinkle a Tablespoon or so of Kosher salt on the onions and toss them to coat.  Place the onions in a shallow baking dish and pour over them:

In a separate bowl, combine:

Carefully pour off a bit of the buttermilk (a couple of Tablespoons or so) from the onions into the flour mixture and toss and squeeze it until the flour mixture is kinda crumbly.  Then remove the onions from the buttermilk and toss them in the flour crumb mixture.  Then fry the onions a handful at a time in the 375F oil just until they are golden and crisp.  Remove them to a cooling rack turned upside down over paper towels.  (This wicks excess oil away, but keeps the onions from contacting the greasy paper towel and re-absorbing the oil.)  Fry in batches until they are all done.  Strain that oil and save it for future frying!

These are really best made on the same day you bake the casserole, though you can store them on a cooling rack, covered loosely with foil, overnight.

Fold the green beans and the mushroom soup together until everything is coated.  Pour into a large glass baking dish that has been sprayed or oiled/buttered.  Cover with foil and place on the center rack of a preheated 475F oven for 15 minutes.  Remove from the oven and CAREFULLY remove the foil.  Sprinkle the onions on top and return to the oven for 5-10 minutes or until the fried onions begin to sizzle.  Remove from the oven, cool for 5 minutes, and then serve the most delicious green bean casserole anyone in the room has EVER tasted!